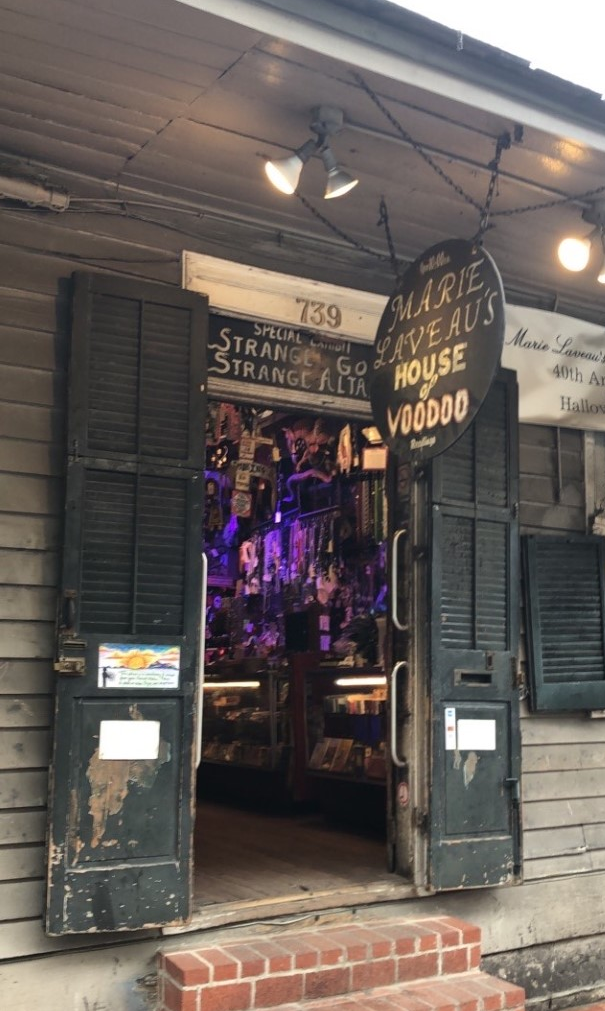 The history and tradition of Louisiana Voodoo has become a unique part of the culture of New Orleans. However, it goes deeper than the Voodoo that has been popularized by the media and tourist attractions. With origins in West Africa and Haiti, brought to Louisiana by enslaved and freed people of color, Voodoo has a rich and often overlooked history, so let’s explore how Voodoo has made its mark on the city and how the city has, in turn, influenced the perception of Voodoo. Through the commercialization of Voodoo especially in the 1920s and 30s, non-practicers of the religion have largely exoticisized and even deamonized the practice, leading to misconceptions based on prejudices that still exist today. Originally published on October 15, 2020.

In chapter 17 “Voodoo in New Orleans” from his book, The Mystery Chronicles: More Real-Life X-Files, historian Joe Nickell states that “[New Orleans’] oldest and most profound occult traditions are those involving the mysterious practices of voodoo” (1). Marie Laveau’s House of Voodoo in the historic French Quarter, named after renowned voodoo practitioner Marie Laveau, is one example of voodoo’s role in the culture of New Orleans. Marie Laveau’s House of Voodoo, and other similar stores, offer tourists an experience with voodoo via merchandise and psychic readings; however, the commercial nature of the store can either clear up or worsen misconceptions towards voodoo. Through analyzing and interpreting the sounds of conversations, creaky floorboards, and silence I have come to understand Marie Laveau’s House of Voodoo as an example of the commodification and commercialization of a religion for profit.

Throughout my recording, sporadic conversations take place amongst guests and employees. The conversations often don’t last long, people may share a sentence or two before the feeling that they are disturbing a peace sets in. You can occasionally hear laughter, sometimes nervous, other times genuine, but stifled. Guests often respond to employees offers for help with some variant of the phrase, “Just looking.” This demonstrates that many of the guests are not here for anything particular or specific, but rather to either marvel at or mock the unique and foreign store products. In her book, Race and Retail, Melissa L. Cooper has a chapter entitled “Selling Voodoo in Migration Metropolises” where she looks at historical perceptions and the cultural presence of Voodoo in the United States. On the commodification of voodoo Cooper writes, “This obsession developed at the very moment when black southerners and black migrants entered the growing consumer economy as consumers, producers, and objects of consumption. ‘Southern voodoo’ quickly became part of the commercialization of ‘authentic’ southern black commodities such as southern food and blues and gospel race records” (2). Around the 1920s/1930s there was a cultural shift in white attitudes towards voodoo and other facets of African-American and black culture. With decades of Jim Crow laws and the established separation of Latin-catholic and French-creole immigrants, Anglo-Saxon protestant America was more reassured and comfortable in their elevated economic and political position. Voodoo became less of a moral and cultural threat and more as an opportunity for entertainment and profit. Conversations around voodoo began appearing like they do in Marie Laveau’s House of Voodoo, with fascination, intrigue, and unease.  Cooper writes, “Black voodooists were transformed into entertainment products that were sold to Americans of all races who were simultaneously attracted to and repulsed by the practice. Long-held white American beliefs about inherently childlike, savage and primitive, irrational and superstitious blacks found new expression in the voodoo tales marketed to American audiences” (2). The effects and practicing of these problematic marketing moves can still be seen in New Orleans today.

Conversations in Marie Laveau’s House of Voodoo can be a bit different from what you might hear in your average, run-of-the-mill tourist gift shop. There are often uncomfortable and nervous undertones in the conversations, if not outright ridicule and mockery of the store’s products and the practice of voodoo. These conversations demonstrate that the commercialization and sensationalizing of voodoo in American culture (via stores, movies, TV shows, art, comedy, etc.) has not rid society of negative views of the religion. The voices are, often, not comfortable and welcoming towards voodoo, but rather approach it with misinformed over-fascination or straightforward disdain. This may be due to the fact that many efforts to commercialize voodoo were not undertaken by authentic practitioners of voodoo. Cooper notes that “many of the companies that mass-produced and distributed voodoo supplies during the 1920s and 1930s were owned by whites” (2). The motivations behind turning this culturally rich set of beliefs and practices into a consumer commodity are not always to improve the public’s perceptions towards voodoo. For many producers and consumers of commercialized voodoo, it is mere entertainment or a rebellious indulgence in a societal taboo. Cooper writes, “Voodoo emerged as a topic of interest among Americans of all races, who had become enthralled by the primitivist fantasies and tales that connected New World blacks to their African ancestors. And voodoo sellers quickly figured out how to transform the nation’s voodoo lust into marketable products that could be sold for profit” (2). The actions of the employees are also conducted so as to market and sell an experience. The employees don’t speak often and when they do it is quiet and short so as to further the aura of mystery in the store. The conversations that take place within Marie Laveau’s House of Voodoo reaffirm that the commodification of voodoo, done largely by non-voodoo practitioners, can perpetuate misconceptions surrounding the religion.

The sporadic conversation in the recording is often separated by moments of silence or at least absence of conversation. In her article, “Perceptions of New Orleans Voodoo: Sin, Fraud, Entertainment, and Religion,”, Carolyn Morrow Long analyzes historical changes in perceptions of voodoo by the dominant American culture. On the initial negative prevailing views on voodoo in US society, Long writes, “Voodoo was considered to be pure evil, the most repulsive form of African savagery. The Americans saw slavery as a permanent condition appropriate to an inferior race. In order to justify holding other human beings as chattel (…) it became necessary to demonize, ridicule, or trivialize their religion and culture, and to teach the subjugated people to scorn their own traditions and value those of the ruling class” (3). In order to disparage and abuse black people it was necessary for white America to silence black voices. Voodoo was seen as a threat to the religious and moral protestant values of mainstream white society. When black culture became fashionable in the late 20th century the voice of black voodooists was not given back, but rather voodoo was rebranded for entertainment. Cooper writes, “This important yet unexplored moment in America’s race-making history reveals how the same stories about race that were used to justify black oppression and discrimination were refashioned and used as capital in the marketing and creation of voodoo entertainment and other commodities” (2). The silence that results from the uncomfortable feeling store visitors have carries the echo of silenced black voices. The erasure of black culture which Marie Laveau’s House of Voodoo attempts to revive via commodification and commercialization is clearly unsuccessful in the silent unease visitors feel towards the products of the store. Stores like Marie Laveau’s seek not to give a vilified religion it’s voice back, but rather to repackage the stifling of black culture and black voices for monetary gain.

Another sound that offers guests the commercialized “voodoo experience” is the sound of the creaky floorboards. Most evident during the moments absent of conversation, you can hear the groans of the wooden planks as people move about the store, more cautiously and carefully than they might on new, quiet floorboards. This gives Marie Laveau’s House of Voodoo an eerie and mysterious vibe. Guests are constantly reminded of their movement, the movement of others, and the space they are occupying in the small store.  The creaking floorboards contribute to the product and experience of voodoo the store is trying to sell to customers—an experience of mystery and comfortable horror.

However, why is it that the sounds of groaning floorboards may trigger feelings of unease and trepidation in people? In his book, Fear: Across the Disciplines, psychologist Arne Öhman explains why certain sounds may invoke fear in humans. Öhman writes, “When organisms learn that a relatively innocuous stimulus (e.g., a sound) signals the occurrence of a dangerous and potentially life threatening stimulus (e.g., an attacking predator), fear and defense elicited by the predator (the unconditioned stimulus) become transferred to the sound (the conditioned stimulus)” (4). Horror movies and our lived experiences with out of place sounds have conditioned our bodies to react with caution, concern, and unease to certain stimuli such as creaky floorboards. So, how does Marie Laveau’s House of Voodoo use this psychological conditioning to better sell voodoo to store customers? They primarily rely on guests’ preconceived notions of voodoo.

Throughout American history, voodoo has been primarily viewed as a taboo and evil mystery. Cooper notes, “White journalists and travel writers who described ‘voodoo’ for the nation tended to simply characterize voodoo as a black practice that was used to work magic spells by appeasing African spirits with blood sacrifices and drum rhythms. Their voodoo tales generally characterized African-black spiritual practices according to popular stories about black savagery in the black diaspora” (2). The American public of the 19th, 20th, and even 21st century have largely viewed voodoo as a terrifying form of witchcraft with grim consequences for those who partake in it. Due to the influence of journalists and the media, Americans were conditioned to view voodoo as a taboo and scary mystery. Through understanding the taboo nature of voodoo and the ways in which horror tropes, such as creaky floorboards, inform our attitudes towards a given subject it is clear that Marie Laveau’s House of Voodoo relies on the affects of sound in order to commercialize and sell voodoo as a mysterious, exciting, and exotic taboo experience.