If you grew up in the New Orleans area, you probably have driven on Interstate 10 towards Slidell multiple times. Whether you have gone to Biloxi, Orange Beach, Pensacola, or elsewhere, the route is familiar to New Orleans natives. On the route, parents of small children often make it a point to show their children a small white castle, which can be seen before you reach the New Orleans Twin Span Bridge. From afar, it appears abandoned and run-down. During my childhood, though, it seemed as if it was an elegant castle inhabited by a beautiful princess. Many natives do not know the story behind the castle, but if one decides to take a chance and take exit 254, the Irish Bayou narrates the storybook for you. 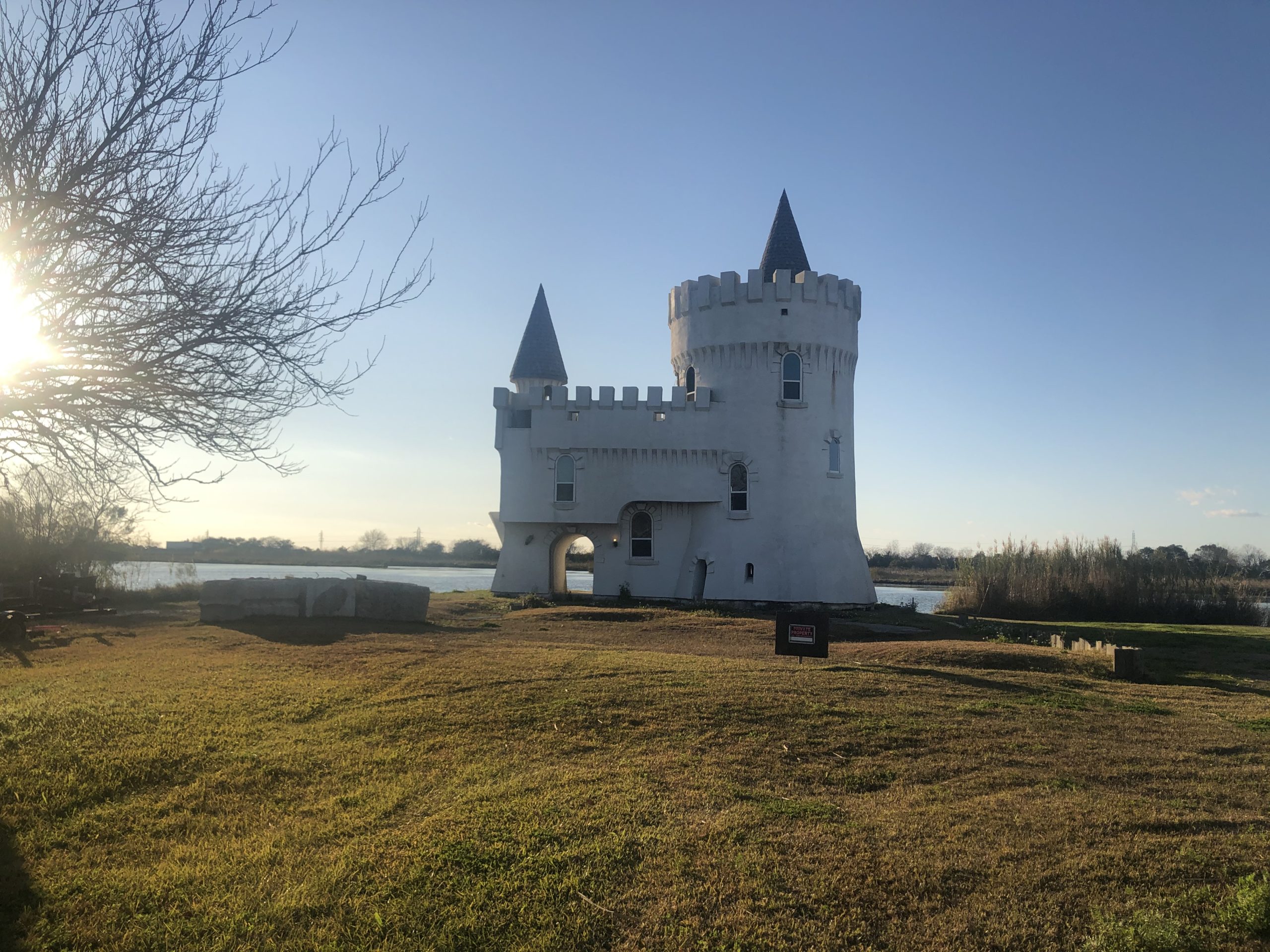 The Irish Bayou’s “Fisherman’s Castle.” Exit 254 on 10 toward Slidell. (Photo by: Zoe Olavarrieta)

First, a sound that you simply cannot ignore is the ongoing traffic on Interstate 10. It is an especially active highway that serves as a key link between the city of New Orleans and neighboring states. There is no sound barrier between the highway and the Irish Bayou, so the sounds of tires and engines flood the desolate street of fishing camps. The castle, whose real moniker is the Fisherman’s Castle, was built in 1981 for the World’s Fair by an architect that was simply bored of building rectangles (3). Since then, it has changed owners numerous times and has entered a state of dilapidation. The constant hum that is heard from Interstate 10 tells the story of its ignored past.

Ever since the dawn of the Industrial Revolution, people have devoted their lives to their occupation. Today, children strive for 9-to-5 jobs and most adults attempt to maintain them. This culture of working 9-to-5 jobs has forced humans to ignore what’s important and focus solely on their jobs. Edward Doeger explained his experience in the current workplace: “…but today my tight hands grip the steering wheel as the lights flit green, red, green – ahead, the right turn’s beyond me; behind me, traffic queues. Petulant car-horns blare dull abuse at no one – I’ve already lost what I had to lose. Eight hours on – eight years – the shallow win,” (2). The everyday lives of humans have become monotonous and robotic with little meaning. More specifically, the working population of New Orleans is forced to live this robotic lifestyle in order to make a living in the unstable economic environment of the city they inhabit.. The three major divisions of the economy in New Orleans are controlled by outside interests and are highly dependent on the national and international economies (4). Also, the price of living in the city increased after Hurricane Katrina, which caused many people to move out of the city (4). Because of the unstable economy, high price of living, and decreasing population, it has been difficult to find a buyer in New Orleans that has the money and time to renovate Fisherman’s Castle. The castle watches as thousands of workers pass its abandoned site every day on their drive to work. In 1995, one couple did decide to stop and give the castle a fighting chance. Charles and Jean Kuhl bought the castle as a retirement home and performed minor repairs while living there, but the major leaks and foundation work were too much for the older couple to handle (3). As of today, the castle sits and hopes that a passionate passerby will stop and care for it. Until then, the Irish Bayou will listen to the thousands of commuters driving back and forth to their 9-to-5 jobs, ignoring what is truly important.

The wind is a common sound that you hear when you are near bodies of water, and Fisherman’s Castle is no exception. The castle is near Lake Pontchartrain, an estuary that is connected to the Gulf of Mexico. There is a constant line of wind that rolls off the lake and into the bayou. The wind in the Irish Bayou has breathed life into the castle since its inception. Like the air in our lungs, the wind is needed for survival. While I was there, I heard two large gusts of wind that caused me to stumble. The castle knows a thing or two about large gusts of wind, considering it has survived numerous major hurricanes including Hurricane Andrew in 1992, Hurricane Katrina in 2005, and Hurricane Rita in 2005. It is one of the only structures in the area that stood firm against Hurricane Katrina; it did not even experience major wind damage. Meanwhile, the city of New Orleans experienced almost $200 billion dollars worth of damage (1). Following Katrina, the city also experienced the largest mass exodus that the country had ever seen; over one million people relocated to other parts of the United States (1). Through it all, Fisherman’s Castle has stood strong during the city’s hardest times. The castle remains a strong symbol of the resilience that the city exhibited after the major storm. The wind that channels through the Irish Bayou speaks of a long and grim past of hurricanes, but the castle has never wavered.

The sounds of the Irish Bayou portray a lengthy story of ignorance, deterioration, survival, and resilience. As thousands of cars, trucks, and buses pass the small and humble community, an important and long-ignored New Orleans landmark lays. Today’s workaholic culture has caused humans to ignore the most important aspects of life in order to make a good living. The wind that rustles through the town reminds tourists and residents alike of the harrowing past that southeastern Louisiana holds; a past that is filled with dreadful memories of Hurricane Katrina. The wind truly breathes life into the property that has survived so many hardships and reminds us of the true resilience that the residents have experienced since then. It is the residents that have kept the true spirit of New Orleans alive. New Orleans has been knocked down so many times by natural disasters and terrible government systems alike. Through it all, people continue to move to the city and stay. The culture, food, and people of New Orleans are truly like no other. Although the city always seems to have something going against it, the people of New Orleans will fight to the end. Even if the city literally sinks, at least we will sink with a drink in our hand and a jazz band to follow. 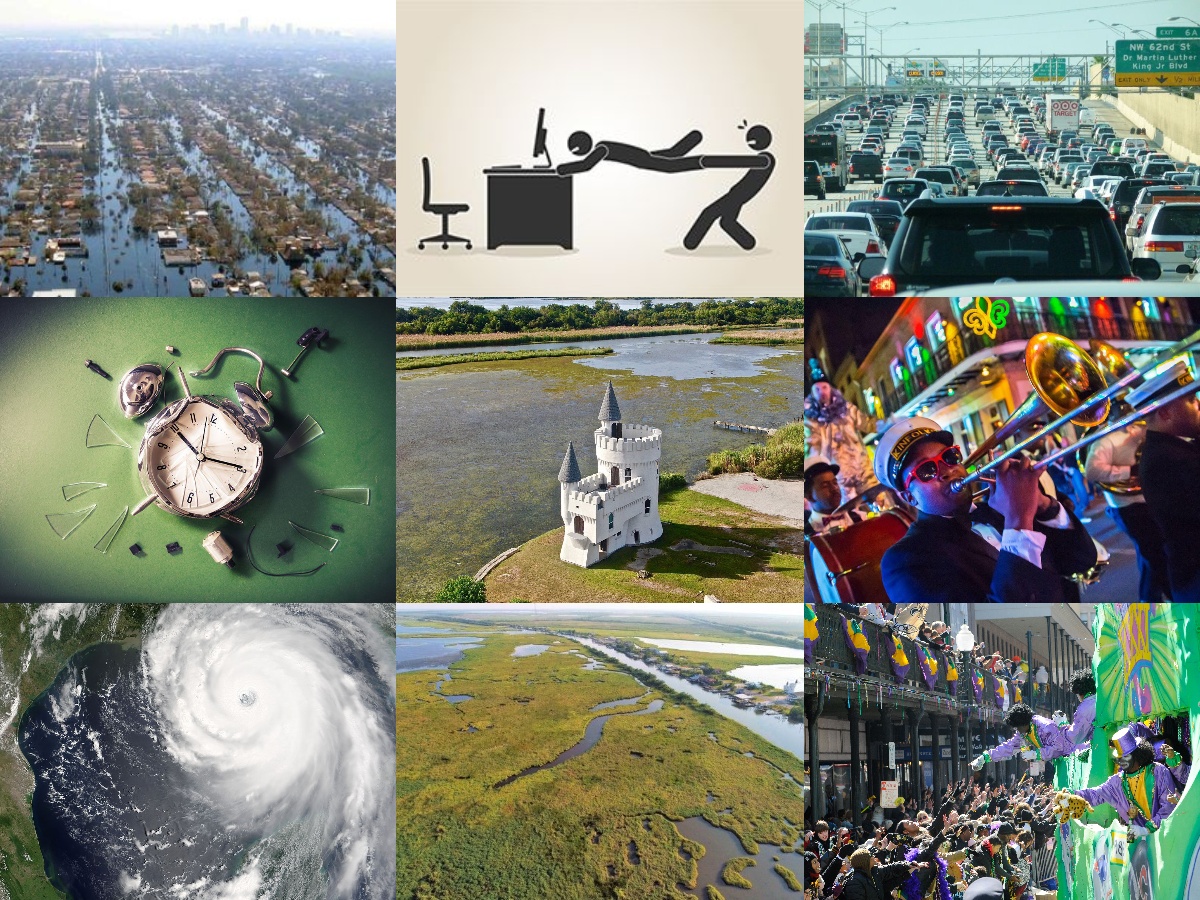 […] has had some facelifts and updates since this photo and if you’d like to read about it just CLICK HERE !.     We actually were surprised so many guessed this correctly but only ONE student guessed it […]