Streets of success: New Orleans fosters musicians of all kinds 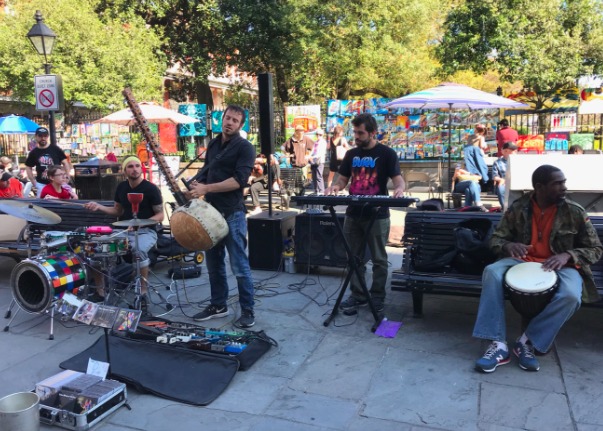 In the toe of Louisiana lies one of the world’s greatest contributions to music: the city of New Orleans. The trumpets and saxophones heard from the city’s infamous second-lines have inspired so much of the music we hear today — from jazz (New Orleans’ specialty), to blues, bounce, and hip-hop — its legacy on the sound of America’s music is unprecedented. This collection of articles explores the presence and impact of New Orleans’ music scene from the red lights of Storyville to the neon lights of Bourbon Street. And while the streets are silent from the effects of COVID-19, it is the perfect time to remember why music is so important to so many. These performers have their ears (and instruments) to the streets of New Orleans. Read more about the performances that bring the city’s culture to light. This article was originally published on January 2, 2019.

The New Orleans streets act as a debt-free academic institution for aspiring musicians. Street performers add notable spirit to the city, and the wandering people who discover them serve as a source of inspiration for these musicians to keep on playing.

“New Orleans has really been my music college out here on the street because there’s such good encouragement and support and inspiration to keep playing when you always have a crowd; well not always, but someone’s standing around” explains Jonah Tobias from Buku Broux, a New Orleans world-fusion band.

After a performance in Jackson Square, a large crowd of Buku Broux spectators flocked to purchase the band’s CDs and talk to its members. Buku Broux has been performing in the New Orleans streets for over five years. During that time, they’ve created three distinctly different CDs, helping them to pursue music as a full-time career, gain popularity and bring their name outside of New Orleans.

Jonah told a story of an old roommate who was in Memphis and got into an Uber with a driver who had one of Buku Broux’s CDs. Jonah explained that this is one of the benefits of being a street musician: “You really get your music out to a wide audience in a really personal connection kind of way out here.” In some aspects, he sees street performance as more beneficial than being a signed artist, saying that “some street musicians sell a lot more CDs than signed bands do. Every day we come out here, and we’re selling a bunch. So many people have our CDs.”

Buku Broux has an incredibly unique sound, and their performance in Jackson Square incorporates drums, a keyboard and an instrument from West Africa called the Kora. With music as the members’ sole career and source of income, some credit has to be given to New Orleans particularly for providing them with an environment where this life path is possible.

“One of the things about New Orleans is people come here for music because you can drink on the street, and because we have these public spaces,” Jonah explains. “People want to be entertained on the street, and that’s what you want to play for. I’ve played in Los Angeles. I’ve played for people who were getting coffee on the morning commute, and it’s alright, it might be some good money, but the feeling here is so much better. And they let us play loud, which changes everything too.”

New Orleans city officials embrace street performance because it promotes the city’s culture and heritage. The use of amplifiers is allowed, and musicians don’t need a permit to perform on the street or in public spaces. There are no strict restrictions on street performers’ volume either. Buku Broux has never had a complaint about their music’s volume, nor have they heard of any other musicians encountering this issue. The loudness of performers’ music perhaps helps in drawing a crowd.

Loud music is an essential part of New Orleans culture, and public spaces as platforms for performance have a long history. Beginning in the early 1900’s, traditional jazz and brass bands played at almost every major event held in the city such as funerals and parades. Social Aid and Pleasure Clubs would oftentimes hire brass bands to play a second line in the streets and parade around communities, blasting music as a means to bring upbeat cheer. This deeply rooted tradition is why performers are able to do what they do today.

Fernando Lima, one of Buku Broux’s drummers, says, “When you go to play a different city, you look for a crowd. But in New Orleans, the crowd looks for you. People that come here are looking for this. Street music in New Orleans is so famous. They come to you looking for music.”

Even outside of New Orleans, the uniqueness of street musicians is acknowledged and sought after. HONK! Festival is a music festival in Boston that showcases performers who began their careers playing in the street. Ken Field has helped to run the event since its beginning. In his opinion, a focus on street musicians is important because “There’s a certain privilege to play music and not get paid for it.”

Through street performance, musicians are able to focus on music as a passion and produce sound organically rather than having to craft a tune according to what they believe will gain them the greatest financial benefits. When street musicians’ music draws in a crowd, it’s due to their genius of creativity alone rather than forced production for attention.

Field went on to talk about New Orleans musicians who have been invited up to the festival because, to him, these musicians have provided for their community through their free and open performances for the public. Bands such as The Young Fellaz began playing on the street and have gained success through being invited up to HONK!.

“Getting to know a whole new segment of people can’t hurt in helping their careers,” Field explains. “I know that some of the bands who are less popular really love this festival because it gives them an opportunity to get out of New Orleans and get known by a new group of people.”

Although Field believes it’s beneficial for some bands to play outside of their city from time to time, he acknowledges that New Orleans is a special place for street performers to build a career.  Field’s band, Revolutionary Snake Ensemble, has experienced playing in the streets both in Boston and New Orleans. They do this not as a means to make money or as a career move, but because it’s something they enjoy, many times busking for a cause or playing for a rally. Field discussed that there is a noticeable difference when playing in Boston versus New Orleans.

“It’s a different vibe up here [in Boston] to be a street musician than in New Orleans,” Field says. “New Orleans, it’s kind of like, that’s just what you do. Up here it’s a little different, not just because of the weather, but because of the vibe.”

It’s obvious that New Orleans’ lack of frigid winters enables musicians to perform outside all year long, but as Field says, it also has a lot to do with the city’s “vibe.” The one-of-a-kind spirit of New Orleans music culture, which attracts outsiders and allows for the success of street performers, can be derived from its past. Adrian Jusdanis, a member of a hip-hop/trap jam band called New Thousand, strongly believes that New Orleans history is a crucial aspect of his band’s success.

“There’s a long history of street performance in New Orleans, and that goes back to decades ago. A bunch of black New Orleans musicians fighting for street music to happen. Because of the work that those black musicians did, we were able to get a piece of the pie,” Adrian appreciatively explains.

During the nineteenth century, enslaved and free people of color were restricted to a single gathering place, Congo Square. On Sundays, people of African descent congregated to this public space practicing African influenced song and dance. The music performed in Congo Square eventually lead to the birth of jazz.

Adrian went on to talk about what he believes is one of the most unique aspects of New Orleans. “This is, like, one of the few cities in America where black culture hasn’t been totally squashed and stomped out. So there’s a huge history of white musicians too, but particularly black musicians, who were able to put the city on the map for music and turn street performance into a legitimate hustle.”

He began as a solo street musician in New Orleans, and after realizing the benefits that street performance in the city could bring, Adrian called three friends about the musical success he had discovered. They immediately quit their jobs and moved to New Orleans to begin New Thousand, incorporating their skills of violin, keys, hand drum and electronic percussion. Although a daring and nerve-racking move, these men had strong confidence in the opportunities that the Crescent City streets could bring them, and they now make all of their money street performing.

New Thousand recently played at BUKU Music and Arts Festival in New Orleans. Adrian describes that this experience “felt very nice, legitimizing and on the way to doing rock star shit.” But, he says he prefers street performance over festival gigs because “we can go to the street and make more money and draw in a more diverse demographic and have more fun doing it, and there’s no stress.”

He went on to talk about what influences New Thousand’s music. “There’s a real spirit that the musicians of New Orleans, especially the black musicians have and, we’re inspired by that. Just by being on the street ourselves, some of that energy comes out through us. You might not hear the same thing that you hear from brass bands, but the feeling of watching us might not be so different from the feeling of watching them.”

Editor’s Note: This piece is the product of a collaboration between ViaNolaVie, Krewe Magazine, and Bard Early College New Orleans. These three community programs partnered together in an effort to bring voices of the youth into the journalistic realm. Under the guidance of professors Kelley Crawford (Bard Early College) and Michael Luke (Tulane University),  a composition course was manifested where students wrote non-fiction, New Orleans-based pieces, resulting in a printed publication (Krewe magazine) designed and published by Southern Letter Press and a digital publication on ViaNolaVie.