Car-free transportation in the Big Easy is hardly ever care-free. For the New Orleanian without a car, figuring out the best mode of transit from home to to the grocery can feel as challenging as choosing what recipe to make. Amid time-shortages, potholes, frequent showers, and Louisiana heat, choosing the best form of car-less transit can be tricky. This grouping of articles explores and appreciates the different forms of transit in New Orleans, no driver’s license or car necessary.

Despite efforts to create more bike lanes, a challenge facing the city has been its growing number of bike accidents. One New Orleans art piece, which aims to both commemorate the cyclists who died but also to raise awareness for cyclists, is highlighted in this article originally published on February 26, 2019 on NolaVie. 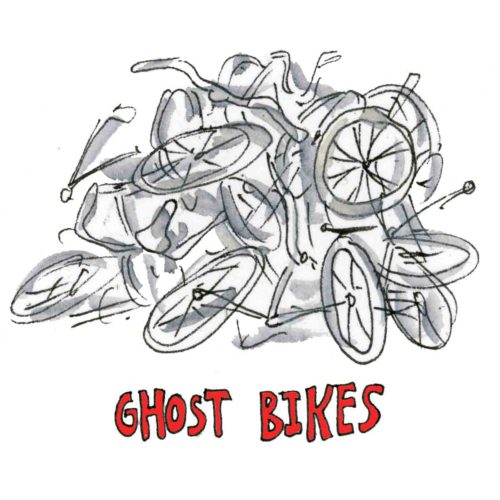 Bicycles, just like any other car, truck, or bus, are an essential means of transportation for people in their daily life. Even though developed countries have the highest rate of using four-wheel vehicles, there are still a lot of people who choose bicycles as their everyday transport. Because of the dominance of the majority using four-wheel vehicles, smaller vehicles, such as bicycles and tricycles, receive less attention and consideration when it comes to street landings and, more specifically, other participants’ attention in traffic.

New Orleans Parish, according to preliminary numbers from the Highway Safety Research Group at LSU, was recorded as having 129 bike accidents in 2010, and that number “more than doubled from 129 in 2010 to 308 in 2014,” according to The Advocate. Even though the city has increased the number of lanes dedicated to cyclists, the growth in bike accidents seems to only grow.

That’s one of the reasons the artwork was dedicated in 2014 — to not only commemorate the cyclists who died but also raise awareness to people who use bikes as their transportation system. The art piece entitled, Ghost Bikes, appears on the corner of Elysian Field and St. Claude Avenue. The sculpture stands out with a tangle of ten or more bikes painted starkly white. All of the bikes are piled on each other, and this art piece is placed along the big, busy crossroad where heavy transport vehicles meet bicycle commuters. The white bicycles, in the middle of hectic setting, grab the attention of the people passing there, giving them a moment to remember these accidents and the lives the accidents claimed.

The frailty and vulnerability of cyclists can be seen in the thin-wheel white bicycles that look like they could break if someone touched them. Different from single lonely bikes that lean on many city lamp posts, this pile of white bikes creates an impactful message for passengers. The Ghost Bikes emphasizes the solemnity of these accidents and makes us not only memorialize the dead, but alarm us that these accidents do and will continue to occur.

Because highly developed countries, such as the U.S., use four-wheel vehicles as its most popular transportation, they often marginalize and de-emphasize the problems that cyclists face when they participate in traffic.

Just ask Jack Riley, a Tulane student who uses a bicycle as the main transportation in his daily life. As he says, “On my mile-long ride from school to work yesterday, I dealt with individuals driving in the bike lane on Saint Charles and even had a women who was texting and driving almost collide with me as she didn’t look for cyclists before she went to make a right turn.”

The daily use of four-wheel vehicles from many residents makes them only concerned with other automobiles and neglectful of smaller vehicles. Moreover, although being taught about bicycle safety laws, many forget about those laws when they approach a nearby cyclist. This mental relapse for the basic safety laws around different transportation vehicles can lead to deadly consequences, for traffic participants in general and bicycle commuters in particular. 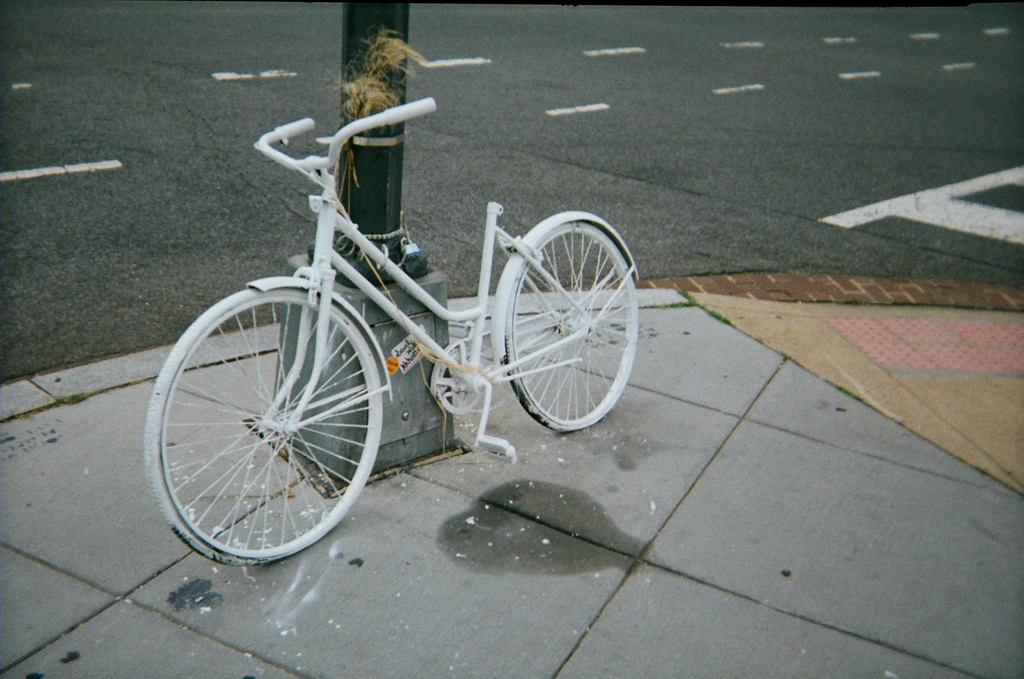 Ghost bikes, such as this one, appear all over the world, and Doug McCassh made the sculpture “Ghost Bikes” in 2014. (Photo by: Thomas Brownell)

The problem not only stems from the neglect of drivers, but it also comes from a lack of support in building more safety lanes for cyclists. According to DMV data, “There are currently 90,000,000 cyclists in the U.S.” By sheer number, one would think that cyclists would have the same right to participate in public roads as other vehicles. However, some New Orleans areas, such as New Orleans East, Algiers, and Central City in Orleans Parish and Metairie in Jefferson Parish have too few bike lanes. Those areas are mostly low-income neighborhoods in which a number of people living there also use bicycles as their main form of transportation. The fact that bike lanes appear more in some areas and less in other areas restricts cyclists’ ability to ride on roads without it affecting their safety.

Jack notes, “I truly think that the way that the plenty of cyclists are treated in New Orleans is unjust and if not recognized further, there will only be more related injury and death.”

The experience from a cyclist as well as the meaning behind the Ghost Bikes sculpture play an important role in raising awareness about bike rights. And hopefully this blend of art and knowledge will ensure the safety for all traffic participants.

Traces, Trash, and Testimony: “Legacy”
Creative Writing
We use cookies to ensure that we give you the best experience on our website. If you continue to use this site we will assume that you are happy with it.Ok