Why Louisiana isn’t the petrochemical Silicon Valley of the United States? 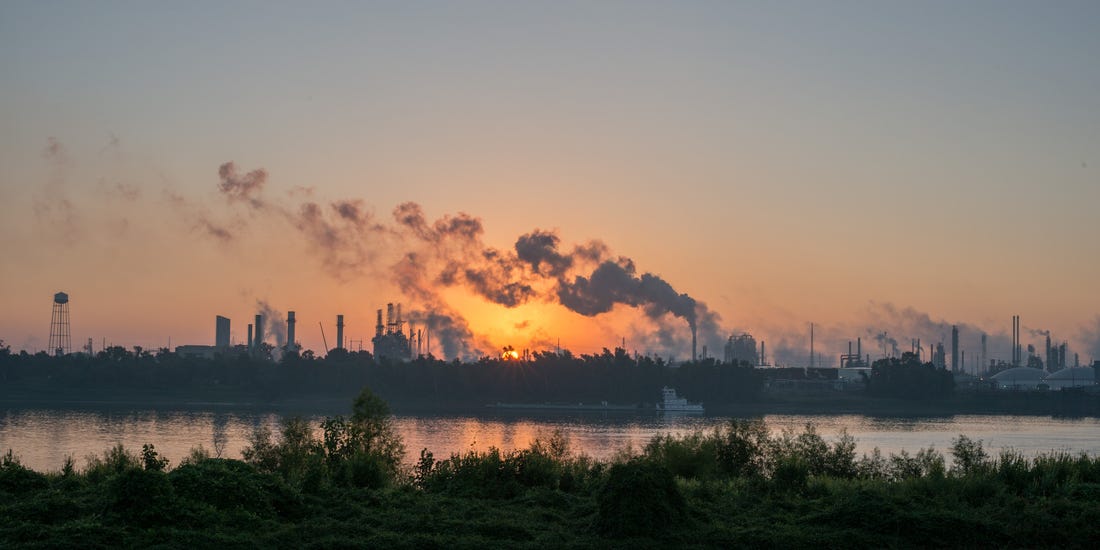 One of the many industrial plants in Louisiana, possibly a big business that is tax exempt. (Photo: Wiki)

The Louisiana Paradox is a situation that is unbeknownst to the majority of the country.  According to the non-profit organization Together Louisiana, Lousianna could be known as the “petrochemical silicon valley.” Then, how is it that LA ranks #50 for overall states in the country? The answer is simple, tax exemptions for big businesses.

However, the problem at hand is what happens when almost all of the taxes on these businesses are exempt? Louisiana is the perfect example of this situation. With almost 10 times the national average for corporate subsidies per capita, Louisiana is making virtually no money from the big businesses that are operating in their state.

ITE applications published statistics regarding the tax exemptions in the state of Louisiana. To clarify just how popular these exemptions are, 99.95% of exemptions filed were approved by the government. This boils down to the statistic that $1.9 billion were lost in 2017 for local tax bodies. This means that the money that the companies were exempt from paying would have been used to fund programs within local communities, such as education and schools, police and fire and road and highway assistance.

The results: Louisiana is one of the poorest states in the country but contains the largest number of industrial facilities. Which in turn contributes to the continuing issue of pollution within the state and area of Jefferson Parish known as “Cancer Alley.”

To give a brief overview of Cancer Alley and the environmental issues that arise amid Louisiana’s large number of petrochemical facilities, the focus must be shifted to Jefferson Parish, a parish, or county, in Louisiana. Cancer Alley stretches almost 85 miles long with a dense concentration of victims and the companies that caused this pollution in Saint James. Journalist James Pasley explains it to be “made up of a dense concentration of oil refineries and petrochemical plants that run alongside suburbs and vulnerable communities.” Members of this community have a very high concentration of cancer and pollution related illnesses that are deduced to be because of the pollutants released by this large concentration of industrial plants within the region.

How is Cancer Alley related to these tax exemptions? This area of the state becomes extremely attractive for big businesses to build their industrial plants. Why? They will have to pay virtually no property tax on the land they will be utilizing for their factories. To give an example of what it means to have property taxes exemptions, the focus will be shifted to a specific company located within Cancer Alley. According to Together Louisiana, Cameron LNG, an industrial liquefaction company, is exempt from 99.99% of their property taxes. That means that the state of Louisiana is prevented from earning $11.7 billion from this company operating within the state’s land.

Are the representatives and officials within Louisiana worried about these tax exemptions and the facts they have on their state and local boards? The answer is: many of the officials and representatives are unaware of the severity of these exemptions. Ms. Simpson is a member of the Jefferson Parish Assessor’s Office. When asked about the statistics regarding the size of Louisiana’s tax exemptions, she often had no answer and was unaware of the statistics she was asked about.

Continuing with if the officials are worried about the money their state is losing, Ms. Simpson said she believed “we (Jefferson Parish and Louisiana) do depend on a lot of their revenue so there are no plans to reduce these tax breaks,” however, she is unaware that the state of Louisiana is seeing little to none of the revenue from these businesses being used to help improve the municipalities of the state.

It is important to note that it is not necessarily rare that a member of the Tax Assessor’s office would be unaware of the size of these tax breaks, as well as the potential benefits to the economy if the tax exemptions were reduced. The overall message is that the majority of Louisiana residents, both involved in the tax industry or normal residents, are unaware of the scale of importance these exemptions ensue.

Now that it is understood that the state of Louisiana seems to be bamboozled out of billions of dollars by big businesses and are not only facing economic issues but environmental detriment as a result; the only thing left to ask is: is there a proposed solution to this situation?

The answer is shaky, Governor John Bel Edwards published Executive Order Number JBE 2016- 26. In order to curb the exemptions of big business and control. It is important to note that the state board currently is in charge of the tax exemptions for parishes across the state of Louisiana. They make executive decisions regarding the money Parish’s are allotted from the taxes of big businesses. With the exemptions approved these officials make money at the expense of many local parishes.

However, Executive Order Number JBE 2016-26 “approved Industrial Tax Exemption contracts that and will result in an average of $1.4 billion in foregone ad valorem tax revenue each year for the next five years for parishes, municipalities, school districts and other political subdivisions of the state directly providing law enforcement, water and sewage, infrastructure, and educational opportunities to Louisiana citizens.” Meaning that there will be specific taxes set aside to specifically fund specific programs within local parishes that were previously money that was exempt from being paid.

The document also sets up local boards that have the power to speak up and have a say regarding tax exemptions to big businesses in their parishes. With the implementation of a Parish Council, businessmen who benefit from the exemptions are replaced with local officials who are attuned to where the money can be used to improve the local economy and utilities such as education and police and fire. Although, in light of recent criticisms Bel Edwards has publicly discussed giving a state level board veto power over decisions made by these local boards. Which would be detrimental to the entire purpose of the executive order.

This executive order is a step in the right direction for the state of Louisiana. However, if action is not continuously taken to decrease these tax exemptions, detrimental effects will continue to harm the economy and environment of Louisiana. Not only will local bodies lose large amounts of money, big businesses will continue to be able to pollute the state and attract numbers of big businesses to create industrial plants in Louisiana and continue to pump poisonous chemicals into the parishes around them. 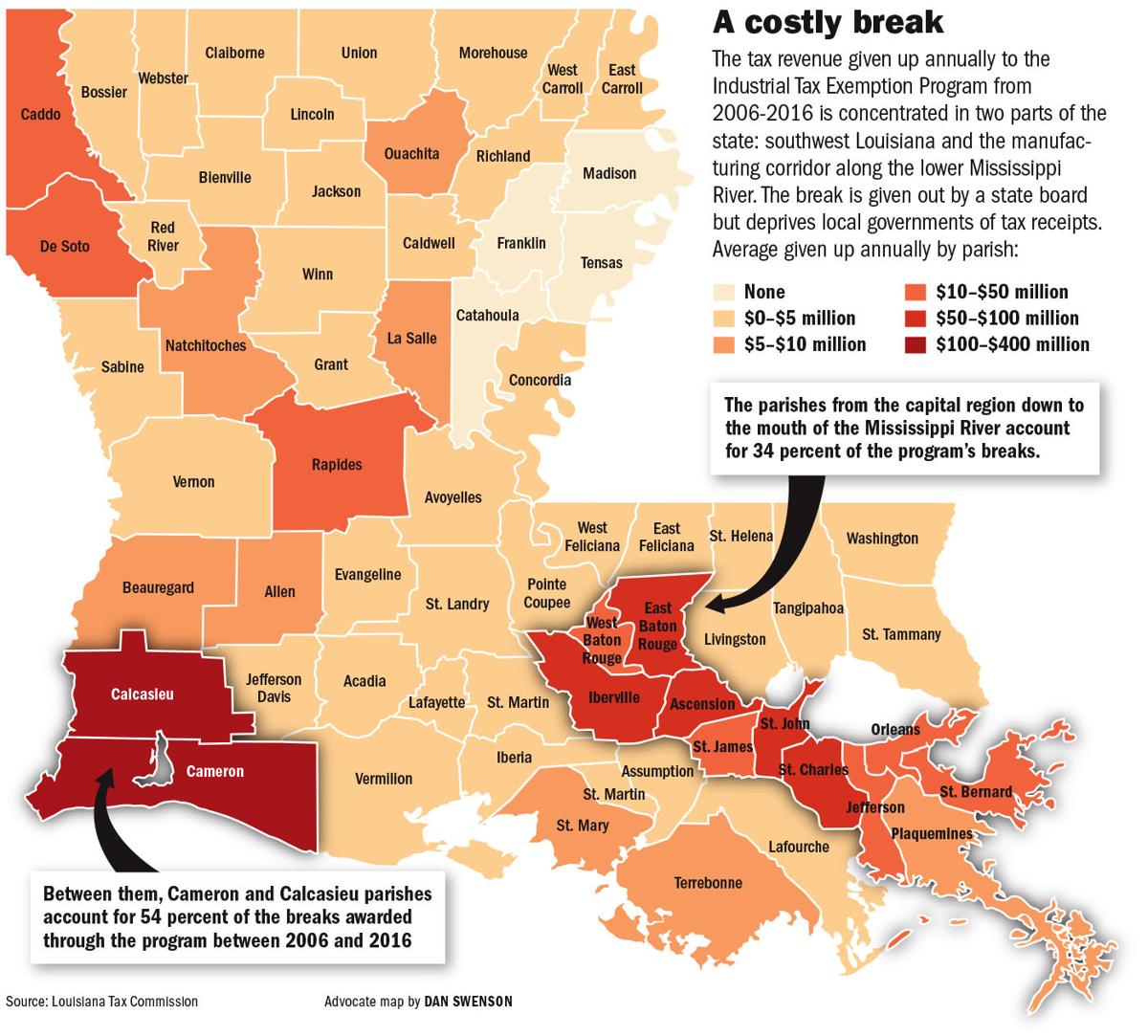