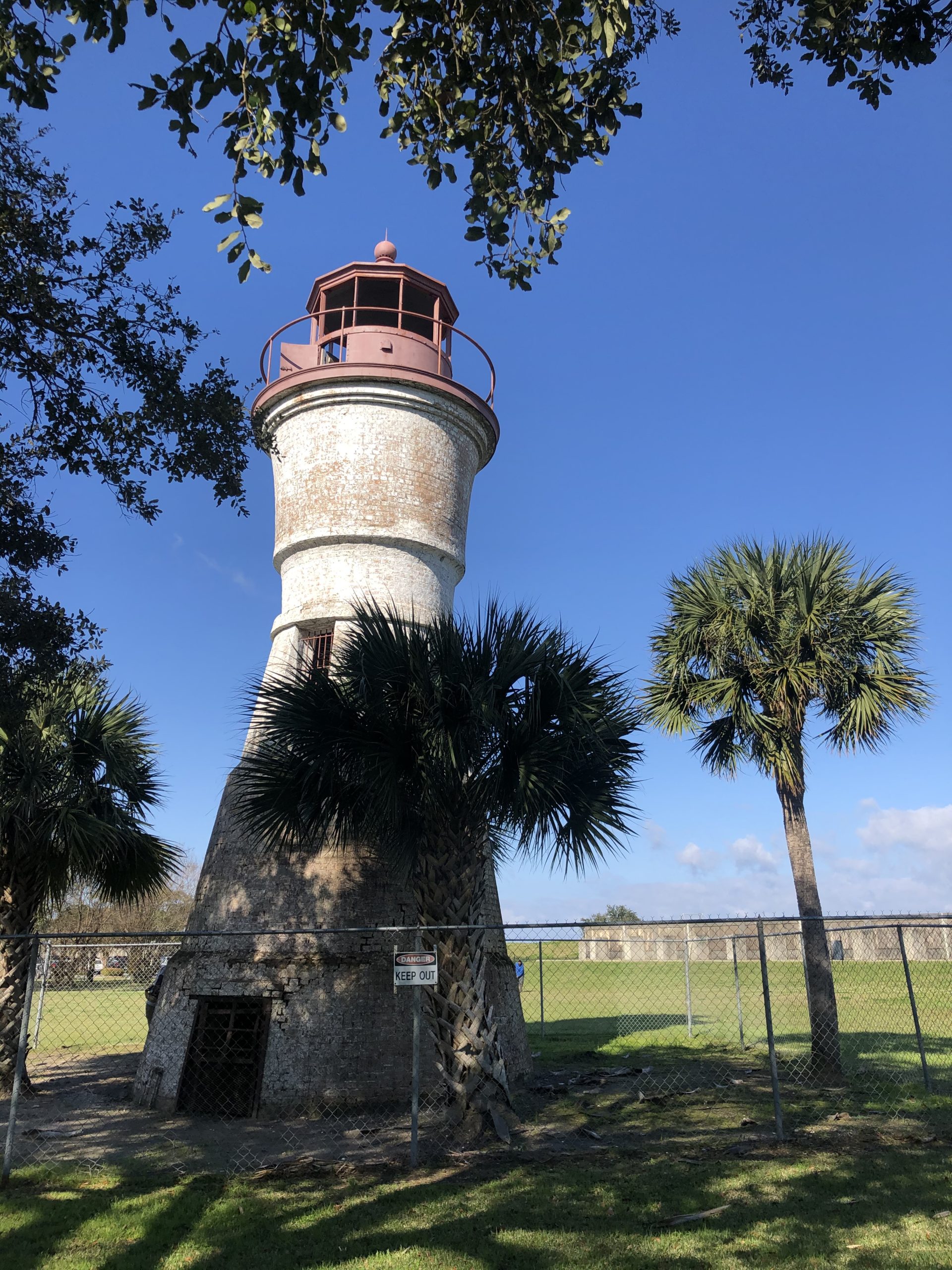 The Lighthouse. (Photo by: Annie Ritchart)

Centered in a business park, near the edge of New Orleans along Lake Pontchartrain, is the Milneburg Lighthouse. The Lighthouse was erected in 1834 by Scottish businessman Alexander Milne (4). Four years prior to its construction, the Pontchartrain Rail-Road Company had been established, which connected New Orleans with the small port city, Milneburg. The Lighthouse has survived every storm in its 186-year life, including Hurricane Katrina. The town of Milneburg no longer exists, but the area surrounding the Lighthouse has been absorbed into the city limits of New Orleans.

Going to the location on a Saturday morning, the loudest and most consistent sound recorded was the wind. The history of Milneburg, which has gone through drastically different phases throughout its existence, is reflected in the sonic qualities of the wind, which change throughout, dipping up and down. The sound of the wind is able to capture qualities of desolation, and then switches to embody an untameable energy, often doing both at the same time. Not only does the wind carry with it the contradictory nature of cities, but of time and life, sparking questions that have been pondered by different generations and cultures.

When the sound dips, the wind is a low and deep guttural sound. It has a roundish quality, almost creating a dome-like atmosphere. It is the ceiling that encloses everything else. While it is softer than the harsher, more cutting wind that follows it, it is still tough, similar to rumbling thunder or a train in the distance. Yet, it is ambient and may even have the effect of lulling one to sleep. One of the most studied places, in terms of wind, is Antarctica. According to BBC, which lists it as one of the windiest places on Earth, it is difficult to even measure the katabatic winds in Antarctica due to the sub-zero temperatures and the sheer strength of the wind that would damage the recording devices (2). The study “Analysis of a Record-Breaking Strong Wind Event at Syowa Station in January 2015” notes that “Strong wind events often occur at the same time as the approach of a strong depression, and a steep topography sometimes deflects the wind” (4). This reflects why Antarctica is such a prime location for strong wind — it’s mostly desolate. With the presence of many opposing forces, including buildings and people, wind becomes deflected and does not overpower the sonic and environmental landscape. At 0:22, the effect made by the wind on the listener is lessened as other sounds also take up space, such as someone’s faint musical humming and the sound of grasscutters. The Lighthouse is surrounded mostly by businesses, most of which are not service-based and therefore do not have many customers walking in and out. Among some of the businesses are an aviation consultant, a computer consultant, an investment service, and a food safety consultant/laboratory. It sits on the edge of Lake Pontchartrain, but the view is blocked due to the leevees and sounds do not travel over them, or at least are not detectable. Without the view of the lake, the Lighthouse appears abandoned and separated from its intended or original purpose. A gate, which orders visitors to keep out, also encloses the Lighthouse. During World War II, the Army and Navy used the area surrounding the Lighthouse, Milneburg, as a base. After the war, the former town essentially disseminated, until finally, in 1983, Pontchartrain Beach was closed. The Lighthouse now remains the only relic of the town still in its original place. The depression, which was studied as accompanying the strong wind at Syowa Station, also reflects the depression of the former town Milneburg, which used to be a lively center of recreation, leisure, and music.

The other prominent sonic quality of the wind in the recording is that of a violent screech. The wind is constantly interacting with the objects around it, taking on their form, moving with it but also slapping against it. At 1:05, the wind is heard yelling over the grasscutters and other milder sounds, creating a chaotic swirl of energy, like a tornado. While the sound is unpleasant, one can also imagine the energy potential the wind carries. In a chapter called “Wind and Self,” which outlines the importance of wind in culture and medical anthropology, it’s noted that “in both Chinese and Greek antiquity, the winds blowing around the body were often presumed to be related to the breaths sustaining the life within” (2). While the wind is pervasive, it is also breath that drives our ability to hum, like at 0:22, or simply to live. Wind can take out buildings and people and towns, but it also cools us down on a hot summer day or on a sweaty jog. Wind is also a powerful alternative to environmentally harmful energy sources like fossil fuels. As “Styles of Being” discusses, wind carries with it a spirit. Milneburg was connected to New Orleans by the railway that was built in 1830, allowing it to become a commercial and communal hub, creating and building this very spirit Kuriyama references.

During the antebellum era, Milneburg became a beach resort town. Aside from the beach, which provided an escape from the insufferable New Orleans summer heat, there were restaurants, saloons, and clubs. Up until the 1930s, Milneburg was an especially important place for the development of New Orleans-style jazz. The town allowed those of different races to play music together or in front of each other. In his song “Milneburg Joys,” Jelly Roll Morton sang the lyrics “Rock my soul, with the Milneburg joys.” The Pontchartrain Railroad ran to Milneburg until 1932, when the town’s peak had already passed. Although the Lighthouse now stands alone, it is surrounded by parts of UNO’s campus, signaling that the surrounding area is still familiar with the generation of future leaders. Other than the acute peaks of wind in the recording, there is a prominent sound of grass-cutters, indicating the evidence of the consistent growth of grass, or, more generally, of life.

The characteristics of the wind in the recording of the ground that the Milneburg Lighthouse stands on mimic some of the most human phenomenons. The wind moves from one place to another, up and down, harshly and softly. At one moment, it provides protection in its encapsulating nature and in the next, it screeches in our ears. It is deflected by the presence of many objects, yet still slaps against it, waiting to pass. With it, the wind carries a truth that transcends time and place: “Imperceptibly the wind shifts. Lovers awaken one morning discover their ardor completely cooled… Rains plentiful or years abruptly dry up… Meditations on the obscure origins of such changes kept returning to the secret of wind’s turns.” (3) The Lighthouse has witnessed change in many forms, some tragic and some exciting: the establishment and dissemination of businesses, the use of its port for a war, the coming and going of boats, and the destruction and rebuilding before and after storms. The wind, while changing tone and volume, remains constant in one aspect: it is always in flux. The Lighthouse, which remains something in New Orleans that hasn’t changed in the last 186 years, is still reminded, by the wind hitting against it, that nothing stays one way forever.

Let’s get down and digital: Moving sex work online during quarantine
Health