The Mass Production of Chemicals and the Issues Concerning Them 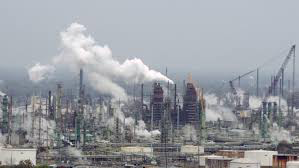 image of the factories in cancer alley pumping out pollution

In Louisiana, the stretch of land that runs along the line of the Mississippi River, between Baton Rouge and New Orleans, is most commonly referred to as Cancer Alley because of the over 100 factories that are run there and the consequences those factories have on the surrounding community. Within the communities of people who live in Cancer Alley, illness runs rampant. Nausea, forms of asthma, stillbirths, miscarriages, and most of all, different forms of cancer are all common ailments reported by members within the communities of Cancer Alley. And the reason as to why these illnesses run wild rests within the industrial production and pursuit of profit.

The amount of pollution that is released from the factories are well above the recommended amount of released chemical emissions.

One common chemical released is Chloroprene, which is a chemical used in the production of Neoprene. Neoprene is most commonly used for medical and sports products as it is a very durable and flexible substance. Products such as wetsuits, sleeves for objects such as laptops and wiring, and many different types of orthopedic braces, including knee braces and wrist braces, are only some of many products using some form of Chloroprene and Neoprene when in production.

As these plants ramp up production to meet a growing demand for plastics and other petrochemical-based products, factories will produce more chemicals causing further harm to communities surrounded by these factories. The economic issues arising with these companies and factories are not directly harming the companies though, only the people around them. Most of the companies are based outside Louisiana, and many outside the United States.

Since the people living in the surrounding areas of these major factories see them as a negative to their daily life, it would be expected to try and leave the area, especially due to the health risks associated with staying in the community. It is almost impossible to leave. With the negative connotation associated with places such as Cancer Alley, nobody is willing to buy a house that is on the market there, as they see that the cons outweigh the pros of doing so. Furthermore, Louisiana is generally a very poor state when it comes to income of families and cost of living, making it only harder for people trying to escape these highly dangerous living conditions. Specifically in Cancer Alley, the median income is only $15,000 a year, which is a third below Louisiana’s state average and half the average of the nation. Seeing as no one is willing to buy a house that is on the market in areas in and around Cancer Alley and those who live in those areas most likely do not have the money to be able to move without selling, it is almost impossible to escape the danger that is Cancer Alley.

Even though Cancer Alley is a difficult issue to solve, many in the community here and all throughout Louisiana are trying to help fix the issue. Through large marches, protests, informational meetings and much more, the movement to fix what is being done is slowly gaining popularity even outside the state of Louisiana. One group that has gained major attention is the Louisiana Bucket Brigade , a non-profit organization that focuses on informing people about the dangers that come with these large chemical factories. The Brigade speaks about the dangerous emissions that come from these factories and recommends that the residents who live in and near these areas regularly check the air quality and the emissions being released by the surrounding factories, as there have been times were the factory knows that the emissions from the chemicals are at a dangerous level, yet the communities around were not informed about the issue.

Another group that has been gaining attention from the public is the environmental group, the Green Army , run by Former Lt. Gen. Russel Honoré. The Green Army is a group of people whose concern for the environment is a large factor in their lives. The group uses many different forms of media, such as informational posts on community pages and videos that help share the dangers of pollution in an attempt to get officials in the community to push for environmental change.

Though the health and economic dangers of Cancer Alley are still prevalent to this day, many are trying to help stop this occurrence. Because of the exposure that the environmental justice groups have gotten, many more are starting to see the issues concerning areas like Cancer Alley and how massive factories are causing more harm than good when considering both the health of the environment in these areas and the health of the people living there.