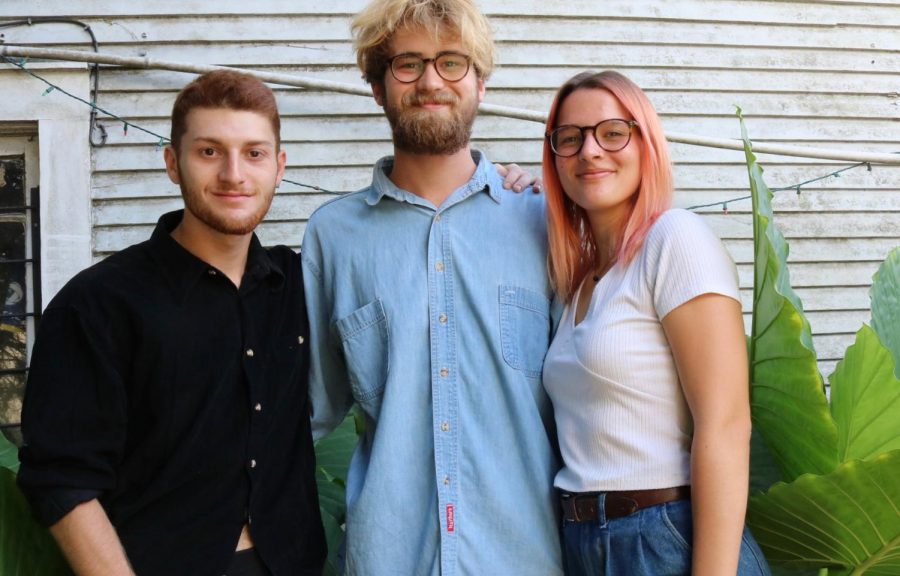 From left to right, Max Landy, Max Steitz and Franziska Trautmann are the team members of the Plant the Peace organization. These students lead a glass recycling initiative in New Orleans that turns glass bottles into sand to battle coastal erosion. (Photo from: The Maroon)

“New Orleans is essentially paying to pollute,” says Max Steitz, a student at Tulane University and co-founder of the environmental non-profit, Plant the Peace. Max points out how the city of New Orleans charges for every ton that is thrown into a landfill, which results in companies spending millions to containment the earth. New Orleans puts little effort towards more efficient recycling programs. The city recycles the bare minimum and only allows materials like plastic and paper to be recycled, while glass gets directed to the landfill.

While the city has had glass recycling programs in the past, they were shut down due to do a lack of participation and interest in the program. Despite this, Max and two of his classmates, Max Landry and Franziska Tratumann were determined to create a free, citywide glass recycling program that would succeed.

Max recalls how they got inspired to launch this daunting project. “We were all chatting and grabbing a beer, and we started talking about how our beer bottles are going to be in a landfill forever. For the rest of our lives, our kid’s lives, and our grandkids, it terrified us. We were talking about how the situation is just getting worse and at a certain point, we thought, why not us?”

It no surprise that Louisiana is in danger due to its poor environmental practices that puts them as the worst-ranked environmentally friendly state in the United States. According to the Environmental Protection Agency (EPA) in 2017 Americans produced 267.8 million tons of waste. 94.17 million tons of the waste was recycled and 3.2% of the recyclables were glass. While these numbers represent the United States as a whole and not just Louisiana, it is still noteworthy to point out that a larger percentage, 4.9% of items ending up in a landfill were glass. More glass ends up in landfills rather than being recycled and reused. Even with these disappointing statistics, The New Orleans government chooses to send all glass to a landfill, showing no effort of fixing this issue, Plant the Peace refuses to allow this to continue.

In order to get the project underway, the team launched a GoFundMe page with a fundraising goal of $15,000 in order to cover the costs of the necessary equipment. However, forty-eight hours after the page launched Steitz recalls feeling “hopeless” as there were only three donations, one contributed by his mother. Nonetheless, only a few hours later, as Steitz puts it, “the magic just started to hit.” Every time the page was refreshed there was a new donation and the team reached their goal in the short span of a week.

Plant the Peace’s glass recycling program is determined to be different than other past programs that have failed. First, not only does the program recycle glass, but the glass gets converted into sand that can be used for disaster relief and coastal erosion, two more frightening issues New Orleans faces. It has been estimated that Louisiana loses about a football field (100 yards) every hour. This is a devastatingly fast rate for the state of Louisiana, and it has been this way for years. A government document on coastal erosion found that during the 1978-1990 time period land loss rates were 34.9 miles every year.

As Louisiana continues to lose astonishing amounts of land every year, Plant the Peace is hoping to slow down this rate by converting the recycled glass into sandbags that can be used to fight coastal erosion. The team uses a special machine, a GLS-95 glass-to-sand machine, that as the name suggests, grinds glass into sand. All the storing and converting of the glass takes place at a house in the uptown neighborhood that has been dedicated to the project. The sand is then stored in big sand containers and as of now, they are housed at the workspace until they are required for use. Once the sand is in demand, the team will use the same trailers that usually transport glass and barrels to bring the sand to the relief site. Furthermore, Plant the Peace has designed a recycling program that is accessible to all. As of today, there are five hotspots, blue barrels where community members dispose of their glass, scattered conveniently in New Orleans. This allows community members to discard their glass 24/7, meaning no one is restricted from participating.

In the past, glass recycling centers were only open twice a week with short hours, placing barriers for people who work during that time, don’t have a car, or have other restrictions. Plant the Peace’s glass recycling program eliminates all of these. They also have an extremely low throwaway rate of 2-5% compared to the industry average of up to 90%.

This project has been a huge success so far, and there has been an extremely positive response from the community. This is shown in how often the team has to replace the barrels. When asked how frequently they have to empty the barrels, Max responded with a long yawn and said, “you should include my yawn to reference how often we are picking up the glass.” While he says they are recycling at a fraction of the cost than most companies and getting better results, the team has spent up to twenty hours a day, moving glass and switching fill barrels for fresh, empty ones.

Hopes are high for Max and his team as they aspire to be a pilot program that encourages other cities to follow in their footsteps. “So much of the country doesn’t have efficient glass recycling programs so we are hoping that this can be a model for other cities.” As their programs continue to expand, the goal is to add more and more hotspots once they can solidify a fast and convenient way of moving and converting the glass into sand. “Sometimes I even get overwhelmed by how much we are working with but that just means that people are interested”.

All residents of New Orleans are urged to participate in this program. As mentioned above there are currently five locations where anybody can drop off their glass any hour of the day and more locations will be added over time. At the moment there are two spots in Uptown, one at Tulane University, one near Carrollton ave, and one located in the Garden District. Exact locations can be found on the webpage named Plant the Peace or Glass Half Full.

[…] waste. They have started an organization called Glass Half Full. In fact, ViaNoLAVie published an article about Glass Half Full previously in August 2020. My article will discuss how they recycle glass and […]

Big Chem-EZ: Is there any glass recycling program in New Orleans? – Via Nola Vie
Recent Posts on ViaNolaVie
Become a ViaNolaVie Patron!     Your donation supports the work of ViaNolaVie to: Provide a platform...