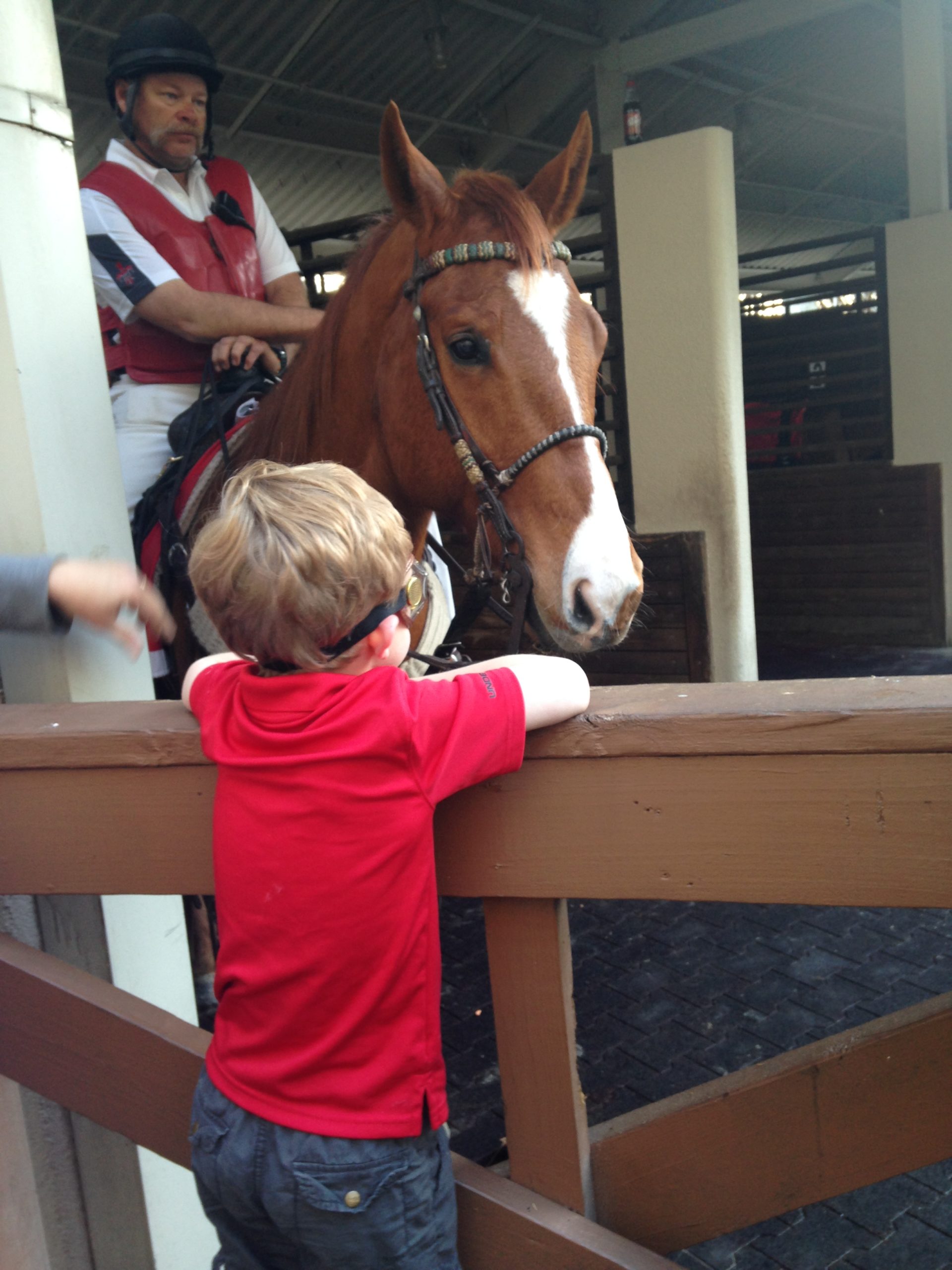 A child petting a horse before it races for good luck  Photo credit: Clare Bruns

Susan Boynton, a Professor of Music at Columbia University, explains, “writers throughout history have commented on the elusive nature of sound, its ubiquity in human experience, and its mysterious effect on the soul” (1). Although sound is ever-present, each space has its own combination of unique sounds, thus creating the “mysterious effect on the soul.” This effect can be found in different places for different people. The space that affects my soul the most is the racetrack.

A typical Saturday morning behind 1751 Gentility Boulevard is usually a stark contrast to the world surrounding it, but during these times of C19, we now can look back at the racetrack for what it used to be, and possibly what we long for.

It’s 6:30 a.m., and I walk into the backside of the Fairgrounds Racetrack. You can hear the trainers talking in hushed tones about others in the industry as they look out at their horses racing their way down the track. The combination of their quick glances and flowered voices illustrates a degree of discomfort. They try to talk quietly, but the content of the conversation causes their voices to go up and down unevenly, unlike the rhythmic sound of hooves hitting the track. The steadiness exists for the horse and the exercise rider but not necessarily these men that watch. The horse and the rider understand each other. They move as one entity and have their own language. As Audrey Wipper, a professor at the University of Waterloo, explains about horse riding, “it’s not just one athlete, it’s two athletes and a combination of personalities, a combination of physical skills, and a combination of minds. So that distinguishes it very much from other sports” (7). The conflicting characteristics in this partnership somehow come together just like the sounds heard inside the stables.

I head into the stables to avoid the increasingly hard rain and a brisk wind. The invariable early-morning rain impinges the ground as the flow of the wind is broken up by the space between the stables, sounding like the wavering voices of the trainers. When you enter the stable, there are sounds of horses’ hooves hitting the ground and you can hear their neighs. You’re even able to hear them chew on their hay. The sounds after the thuds from the hooves are horses being bathed and stalls mucked off soiled hay. The sounds contrast, but mesh together much like the cultures in this physical space. Pierre Schaeffer, a member of the University of California Press, defines listening as “to lend the ear, be interested in. I move actively toward someone or something that describes or signals its presence through a sound” (6).

These sounds I hear are only white noise; however, there’s a difference between listening and understanding. Schaeffer believes that “to understand, to take in, has a double relationship with listening and hearing” (6).

The white noise I describe is what I heard when I merely listened. There is so much more to absorb in this stable. What needs to be understood lies in the voices of the backstretch riders. Alisa Yamaguchi, a scholar in the Department of Communication at the University of Washington, writes, “Previous scholars have acknowledged the emergence of Latinos in the horse-racing industry, in their common position as backside worker” (8). The stable is filled with the exercise riders’ voices and laughter. They talk about the horses and exchange stories about everything and anything while they bathe the horses, feed them, and saddle them up. Their laughter isn’t just about enjoying their work; it’s evidence that the riders are comfortable in their environment. They don’t feel the need to lower their voices. They are just as much at home as the horses are in their stables.

While standing on the outskirts of the stable observing, I hear things from the trainers to the riders like, “¿Cómo cabalgó el caballo? ¿Cómo está tu madre? ¿Vas a beber después del trabajo?”, and the questions don’t stop there. The riders’ voices go from full to melodious to raucous and everything in between. The sounds mimic the energy coming from the music that plays on the beaten up stereo and echoes throughout the stable. The fact that the trainers speak the language of the back riders is significant. Language barriers are a hindrance to understanding and progress. However, the interdependence and interaction between these actors reduce the language barrier.

The discussions between the trainers that I saw when I first walked in, although in the same language, were quite different. Their lowered voices and glances indicated a certain amount of stiffness. Elizabeth Burney, a Research Fellow at the Institute of Criminology in Cambridge, writes that community is the “notion that it defines the relationship not only between ourselves as individuals but between people and the society in which we live” (2). Burney describes precisely the way in which community is formed in this very niche space. The contrasting sounds in the stable somehow intertwine, just like the seemingly conflicting cultures, which creates a unique community that is unknown to so many.

Gaye Theresa Johnson, the author of “Space, Sound, and Shared Struggles”, believes that “articulating a right to visibility and mobility (in physical places) and demanding recognition and respect (in discursive spaces) addresses and redresses the injuries enacted by systemic spatial isolation and racism” (5). The workers have claimed a physical space by disseminating aspects of their culture throughout. As recently as the twentieth century, racing consisted of white jockeys that were born in the United States.  Around 1960, there was a shift in who could be a jockey (7). Iber, the author of Latinos in U.S. Sport, wrote that the change in the cultural composition of jockeys began to occur as “the world of horse-racing began to notice the presence of Latinos in their sport” (3). This is where the cultural integration of Latinx begins in the industry. An important moment of cultural identity and significance arose when Victor Espinoza, one of the most highly regarded jockeys, won the Kentucky Derby for the second time in a row. He told a reporter that he felt like the “luckiest Mexican on Earth” (7). He gave those a part of his culture and with similar values a voice. This shift is evidence of Latinx commanding recognition in a physical place. This sport has become a “cultural site for Latinos…and it facilitates their assimilation into the United States” (7). 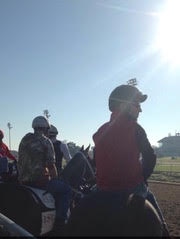 The sounds on the backside, although varied, aren’t chaotic like the engulfing sounds heard in the track. The laughter and mixture of languages in the stables versus the whispers outside of the stables is meaningful. The aggressive division of sounds in the different spaces illustrates the separation between cultures. Those watching the sport are completely unaware of a world beyond their own.

If not for understanding, not just listening, we overlook others and their cultures. We are surrounded by so many different beautiful cultures, especially in New Orleans, and yet, we still struggle to understand. The backside of the stable is completely disconnected from the world of the white middle to upper class that is right outside betting. If people would take the time to embed themselves and truly stop to look around and listen, as the trainers and riders, it’s possible there could be more tolerance and acceptance in the city.

When we meet, I do not ask

“Where are you from?”

When we meet, I do not notice

the color of your leathered hands,

When we meet, I do not think

of the woman who raised you,

the children who look up to you

the rhythmic clomping of hooves on your track,

the hot exhale of a horse’s breath

the laughter of the girl I once was,

the wonder of the soul I will always have

the hum of a system in motion

the warm underbelly carrying a world of luxury

So transfixing and delicious, I even forget

This piece is part of the on-going series, “Hear/Here,” which analyzes sounds in culturally and historically significant areas in New Orleans. It is part of the Alternative Journalism class at Tulane University that is taught by Kelley Crawford.