Shoot and share: It’s a bit of a basketball story for photographer Frank Relle

Frank Relle, a photographer and Louisiana native, attests to the multitude of “intoxicating experiences” New Orleans has to offer, be it an individual’s taste in music or taste in drinks. The city’s aura leaves little room for introspection and peace. However, Relle’s photography gallery located on Royal Street provides this much needed oasis.

Relle’s photographs eternalize the illusive and oftentimes forgotten crevices of the bayou with the click of his camera’s shutter button. These images reflect a stark contrast to the boisterous street life outside his gallery’s doors. Relle’s inviting yet contemplative nature strongly resembles the areas that he photographs. As a result, Relle has become one with his environment, enabling him to share the hidden gems of the Louisiana Bayou with a community unfamiliar with the mysterious nature of the swamp. 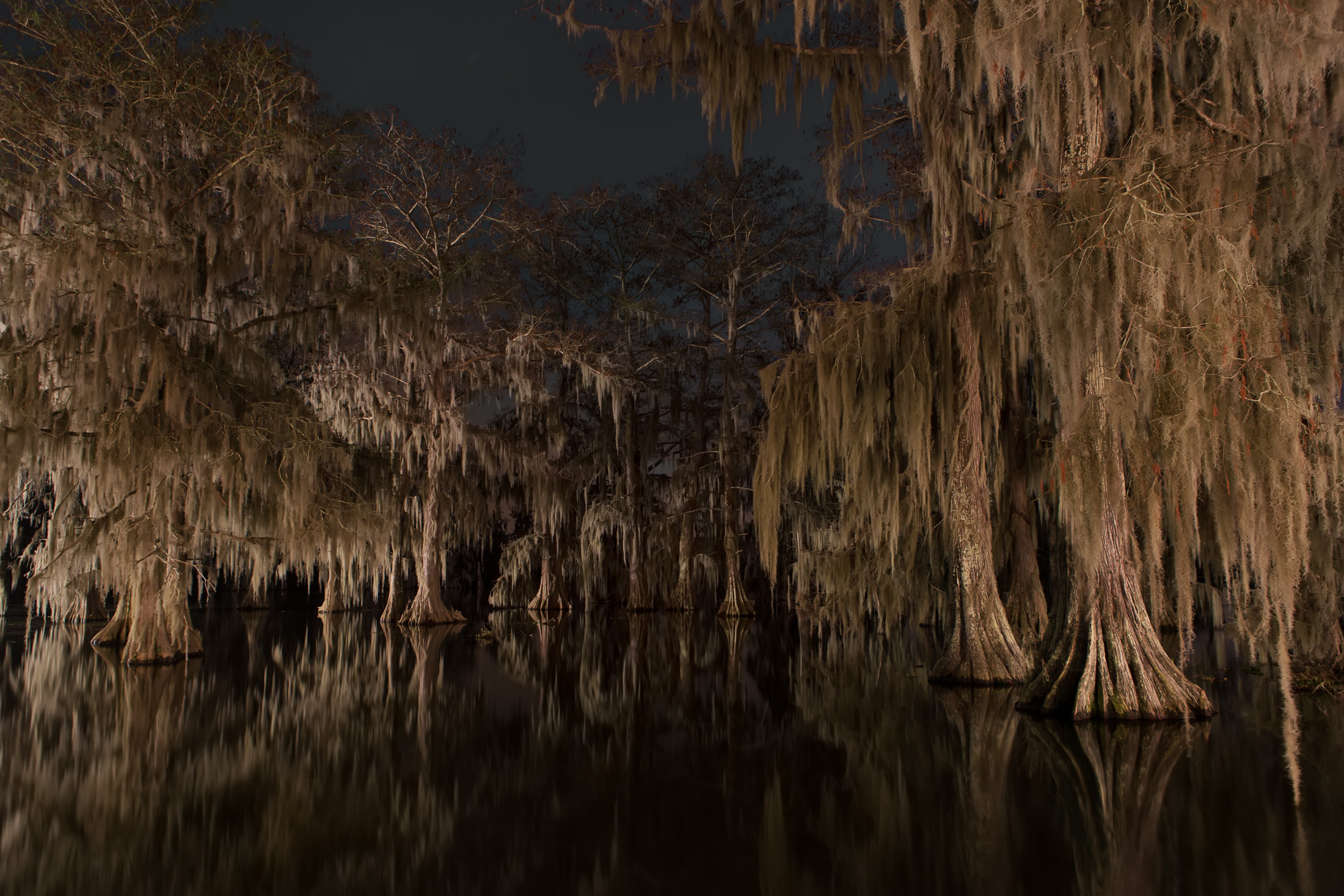 Photo “Oleus” in the series “Until The Water” (Photo by: Frank Relle)

The sound of metal echoes as Relle and his assistant load Relle’s photography gear onto the boat. *Clink* goes the tripod, *clank* goes his bulky photography lights, and finally *clunk* goes the generator as Relle bumps into it when hopping in the boat. Taking the reins, Relle’s boat glides smoothly atop the marshy waters of the bayou. The boat acts like a sharp spear effortlessly propelling through the water, heading for the innermost swampy areas. Driving further and further into the belly of Louisiana’s wetlands, the water gets darker, the air gets moister, and the vegetation begins to thicken. Neither the Louisiana heat, nor the passing hours discourage Relle from continuing his journey. Every so often, he stops to examine areas that pique his interest. Whether it be an abandoned hut or peculiar tree, Relle ultimately finds an eye catching subject and prepares to shoot.

Louisiana swamps at night appear intimidating to most, but they are quite inviting to Relle. The sky is a dark, black sheet; the only light produced shines through the worn-out holes in the sky. Oftentimes, wispy clouds cover the sky, adding an even eerier allure to Relle’s photographs.

Relle situates his photography lights to shine in the direction of the scene intended to be photographed. Next, Relle reaches for his tripod and lowers it into the void. It can “go in like thirty feet of water and act as stilts that I can use to stand on,” Relle attests. His body, supported by the water and stilts, allows Relle to settle into his photography process, and feel at ease. The water lapping against Relle’s body welcomes him to be a part of his art, opposed to simply being an observer. 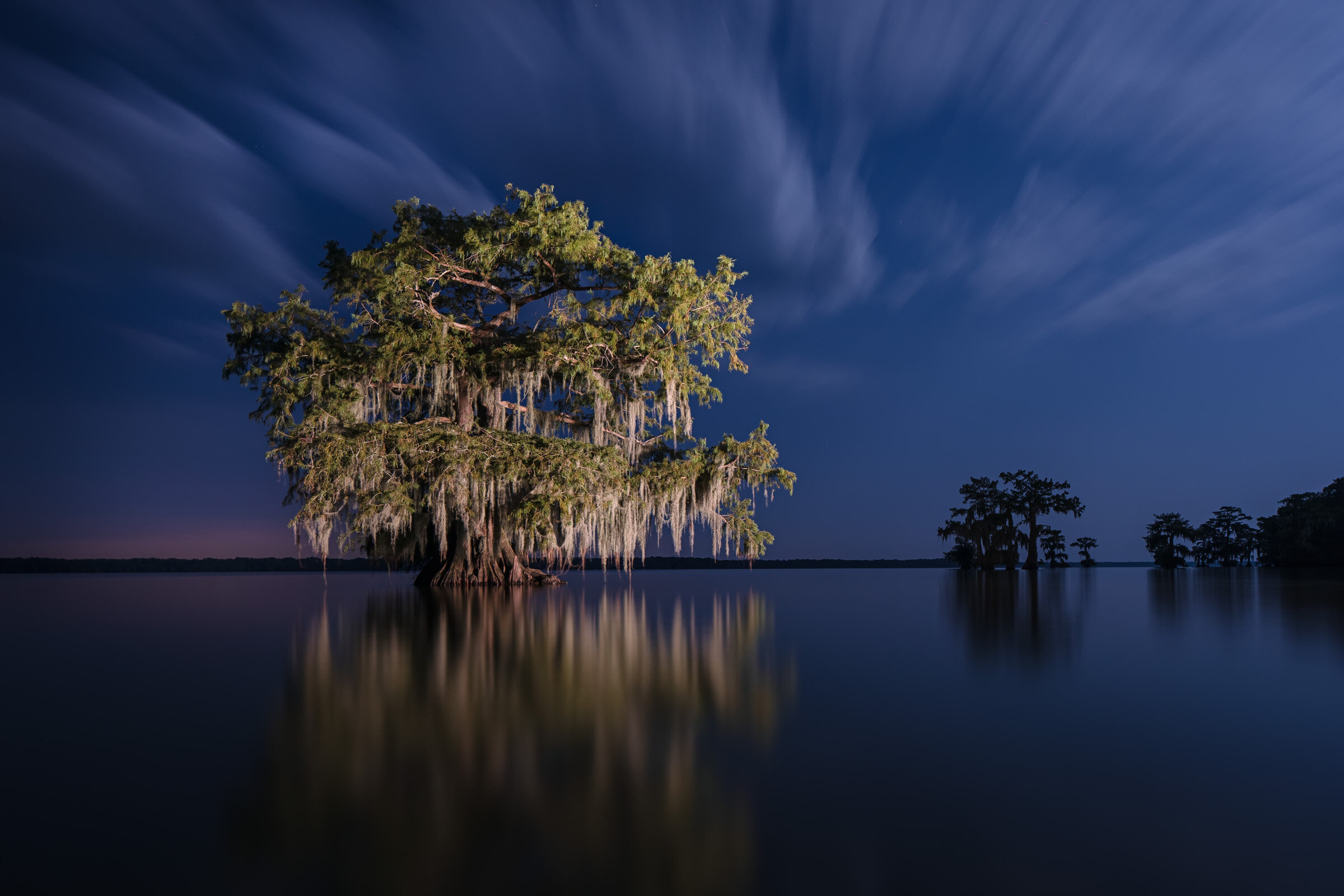 Photo “Fontelieu” in the series “Until The Water” (Photo by: Frank Relle)

This unwavering focus and calmness Relle exhibits amidst disturbing situations comes through in his final photographs. Relle photographed an enormous, lone, tree amid a large body of water. The tree’s blurred reflection in the water opposite the hazy, cloud filled sky, creates a surreal picture. Relle says his dreamlike photographs “connect with a lot of people relative to (their) memories.” Many times, viewers look at photographs with the objective of finding out the “story” behind the photograph, however, Relle encourages people to stay present and simply acknowledge what sensations or memories are brought forth.

“Create Share” is a mantra Relle came up with in regard to sharing his photography. He explains this practice in relation to the game of basketball (one of his favorite childhood activities). On Relle’s bundle of keys, he has a keychain of a basketball swishing into the net. To Relle, this illustrates a basketball player’s practice and ultimate success. The keychain “was to remind me that I needed to not just take pictures, but I actually had to finish the process. I had to print them. I had to show them to people,” Relle states. Shooting well is the key to both photography and basketball. However, both can only be fully enjoyed and appreciated when shared with and experienced by an audience.

Relle’s photography connects two worlds. The city of New Orleans depicts how we, as humans, often try to present ourselves to the outside world: fun-loving and carefree. Whereas the inner channels of the Louisiana Bayou capture our hidden, more personal qualities. When stepping into Relle’s gallery, his visitors may reflect on their lives without consciously realizing it. Relle’s dreamlike photographs offer those in New Orleans an opportunity to take a moment, set down their drink, and let their mind wander into the quiet elegance of the bayou.

Making something more than art: The passion-driven photography of Brandon Robert and Frank Relle
Artists

Pauly Lingerfelt and the art of change
Artists