From clips to clicks: Dog gets new legs

Editor’s Note: No, this isn’t The Onion, and yes, you are looking at a real news story. Students in Kelley Crawford’s Alternative Journalism class at Tulane University dove into the archives of the Times-Picayune to find some shinning star articles. Everything from people having snakes in their bellies to a man becoming a human torch will be covered in the series, “From Clips to Clicks.” We will display the original piece from the Times-Picayune (the “clips”), and then the written text will either be a modern adaptation or a commentary on the piece that’s published on ViaNolaVie (the “clicks”). 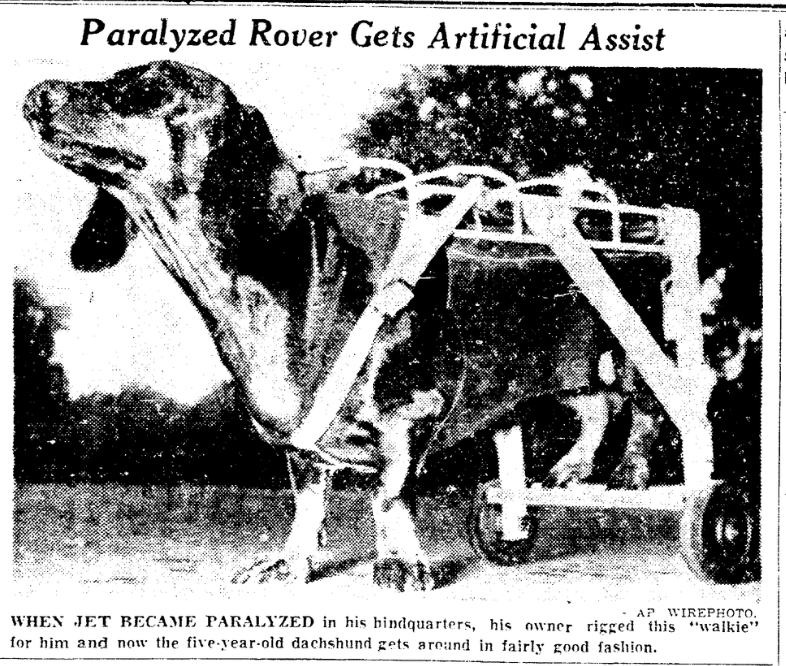 A dog getting artificial legs in the year 1853. (Photo courtesy of: Tulane Archives)

A dog without the ability to walk, run, and play. Can you imagine? An amazing, new, scientific innovation has been created by the Massachusetts Institute of Technology engineering graduate students. This product is designed to give back a dog their ability to walk again.

Buddy, our pup in question, lost his ability to walk when he was unfortunately injured in a car accident. Due to the impact of the car and positioning of his body, Buddy’s back legs became paralyzed. His absolutely heartbroken owners heard of the prosthetic dog legs that had been newly tested at MIT.

Buddy was soon one of the first dogs without the ability to use its hind legs to be admitted to this trial at the university. In the past, the solution to this type of paralysis in animals was unavailable. Many dogs simply lost their legs, while some were given an attached wheel contraption. While that may have been a good solution to giving back these animals the ability to walk at that time period, it was not suitable to animals because these contraptions with wheels attached, like a wagon, made it almost equally as hard to be mobile.

This incredible new development is giving so many dogs a second chance function normally. These prosthetics are able to be made in almost any size, are waterproof, and can be made to shape and fit into the body of, as trials are advancing, most domesticated pets. The prosthetic is shaped like the animal’s limbs, however has a wheel at the bottom of each leg, and is scientifically created to mimic prosthetics of humans and the limbs of the animal. Despite the wheel, the prosthetics were created in a way that prevents slippage. As more trials take place, the Massachusetts Institute of Technology plans to release their product to veterinary hospitals by the end of the year.

From clips to clicks: Eczema broke out on face and neck
Humor

West of Eden: Exposing a toxic society
Music
We use cookies to ensure that we give you the best experience on our website. If you continue to use this site we will assume that you are happy with it.Ok