During a time of panic, meme quality is at an all-time high

One feature on the iPhone’s settings menu is called “Screen Time.” This keeps track of how long you spend on your phone each day, even narrowing down how much time you spend on specific apps. During quarantine, amidst the COVID-19 crisis, all the rules about screen time have gone out the window.

My screen time has jumped from a modest 3 hours a day to an immense 8 hours. This time is, admittedly, spent looking at memes . Instagram and Reddit — my points of supply for memes — account for 4 hours of screen time on my phone daily. I thought to myself: Screen time shouldn’t be allowed to count during quarantine. Ironically, later that day I came across a meme echoing those sentiments. And, then, I hit the irony mother load.

All it took was one Google search to discover an entire collection of memes addressing everyone’s increased screen time. This is just one example of how we as a society are using memes as a healthy coping mechanism to make it through this trying time.

During this period of chaos, memes have undertaken an important function: promoting social responsibility through creative expression. During mass quarantine, memes have constructed an implicit obligation to comply with “socially responsible” practices, like social distancing or wearing masks in public. When the government issued a stay-at-home order in March, nearly everyone obeyed, despite no legal obligation to do so. People did it because it was the morally correct thing to do.

This gallery consists of memes that exaggerate the grim sentiments shared by the American public while they sit at home and comply with these orders — missing out on paychecks, and perhaps more crucially, social interaction. These memes make light of the situation, but they also never challenge the status quo implemented by the government insisting everyone remain isolated. In a sense, the call to social responsibility underlies the creative expression of these works. In an interview for CNET, 26-year-old Deellan Khanaka explains how memes have offered a source of diversion in a time of stress and uncertainty: “It’s nice to know you’re not alone in your experiences, even though you’re physically and socially isolated.”

The apparent sense of togetherness that Khanaka’s quote discusses points to how people are following recommended health and safety guidelines, primarily for the good and welfare of each other. This is similar to the discourse that mainstream media news outlets have been promoting, but it differs in one key way. The creatively expressive nature of memes allows the public to acknowledge the uniqueness and peculiarity of the current crisis in a way outlets like FOX news or CNN are not able to. Memes exist within a nuanced culture on the internet that is inherently satirical. When a viewer sees a meme addressing what is going on regarding COVID-19, the existence of the meme already suggests that the given topic will be dealt with in a sardonic way.

For any internet user, this nuanced “language” of memes is abundantly accessible to learn through participation on content-sharing platforms such as Instagram, Reddit, or Youtube.. The form of expression typically associated with memes is a light-hearted type of comedy. However, as this pandemic has taken a more severe turn, the memes regarding COVID-19 and mass quarantining are beginning to take a darker, more cynical form. Palmer Haasch, writer for Insider, chronicles this transformation throughout the timeline of the virus’s growth. As the situation begins to impact the public’s day-to-day lives more and more, the memes get gloomier, highlighting how strenuous social isolation can be. These memes treat following these guidelines as a necessity, once again reinforcing the importance of the social responsibility demanded from elected public officials.

Andrew Boyd, an American author, explains that a good meme can “spread a powerful social change message but also… serve as an organizing tool.” The aforementioned group of memes depicting what the public is going through while stuck at home implicitly acknowledges social distancing as a necessary and rational social action to take. The memes simultaneously work as the “organizing tool” Boyd mentions, evidenced by the shared struggle Khanaka claims are depicted. When analyzing the ideas Khanaka expressed in her interview, Abrar Al-Heeti labels memes a “reprieve” during a time of great uncertainty. Yes, this is true, but these “pieces of cultural DNA”, as Boyd calls them, also serve to remind the public they can enjoy the satire introduced by the creative expression of the meme, so long as they understand the cultural context of it. In turn, the cultural context of the meme can only be understood through participating in what has been deemed “socially responsible” action. Through this process, these memes are turning the “socially responsible” into the “socially acceptable”.

As we continue to work through a difficult time, I have included a collection of memes that I believe offer humorous insight to this unprecedented situation, while encouraging us to follow protocols such as social distancing and self-quarantine. 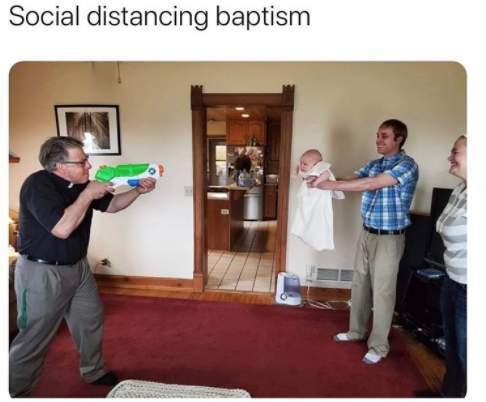 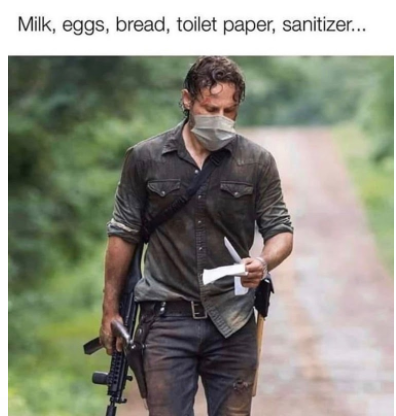 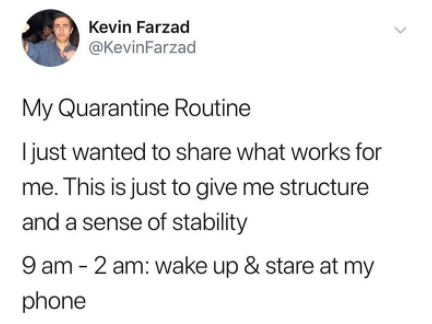