Controversial conversations with my dad about COVID-19

As America’s second, moving into third, month in quarantine rolls into our lives, people are more restless than ever before. With the ever-changing nature of COVID-19, nothing about our future can be certain. Nobody knows if we’ll be able to leave our homes in two weeks, two months, or two years. Rumors are constantly circulating regarding the summer and even more worrisome, the fall. But what people are starting to ask is why… Why is the entire world shut down for this new sickness that somebody deemed to be a pandemic? Is this necessary? These are just a few of the questions that people, like my father, are beginning to ask, as evident through recent protests.

The world is going into panic mode as the unknown is causing global distress. According to the CDC, the fear caused by COVID-19 is creating other issues, such as “worsening of chronic health problems,” and “worsening of mental health conditions.” Because of this, people like my father are asking: is this shutdown worth it?

One of his first doubts about the “pandemic” revolves around what differentiates COVID-19 from other viruses. He goes so far as to claim that the government’s response to the outbreak was “unnecessary,” and questions the legality of smoking cigarettes. If you didn’t understand this connection at first, we’re in the same boat. After outlining the similarities between the two, I began to understand. My immediate response to my father’s seemingly unreasonable claim was that people have the choice to smoke cigarettes, which is unfeasible with COVID-19. To this, he had two more claims. First, while there are about 480,000 tobacco-related deaths each year, about 41,000 result from second-hand smoke, rebutting that “decision” argument. He then asserts that the surgeon general should warn each age group of their risks and mortality rate, effectively equalizing the dangers of the virus with that of cigarette smoking. He questions why we are treating the two so drastically different. For one, we repackage a few boxes with some warnings, and for the other the world is subjected to isolation, job loss, and panic. So, why have we shut down the economy? 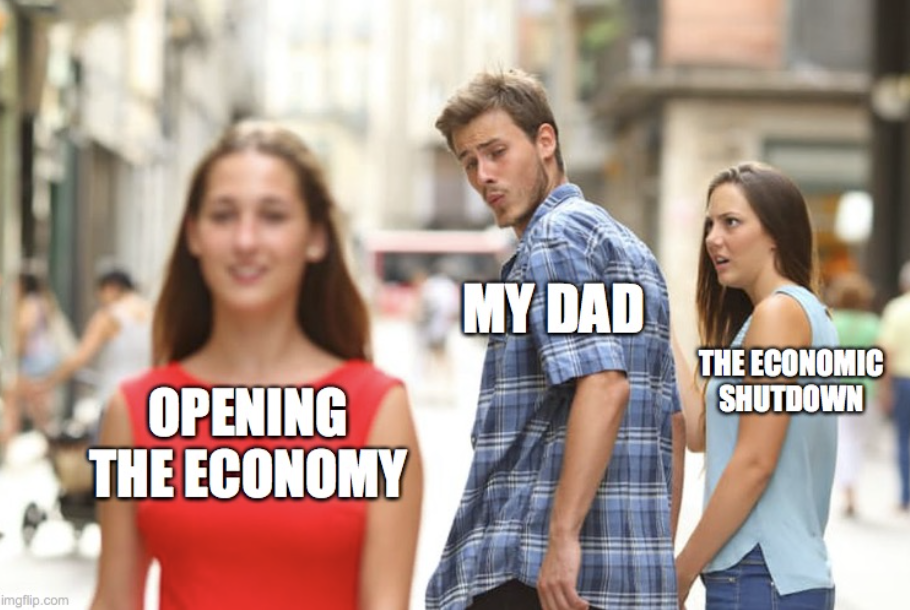 While my father is currently experiencing the economic shutdown, like everybody else, he is wishing the economy was open, thinking it should be.

My father then provided another one of his non-warranted ideas about how to save lives in a way that doesn’t involve going on lockdown. He asserts that lowering the speed limits to 30 miles per hour would save countless lives by reducing the number of car accidents. Does this indicate that having a higher speed limit, as we do, means that we don’t value human life? The answer to that is no. He points out that there is a risk and a reward for everything, so sometimes we must make decisions accordingly. What makes raising the speed limit more rewarding than saving the economy? Again, why have we shut down the economy?

Whenever I question my father’s non-traditional beliefs about COVID-19, he brings up that it’s not as contagious as people claim. Experts appear on television each day emphasizing the disease’s deadliness. Well, “experts,” is a fatality rate of about .5 percent in New York City, the major hotspot for the virus in America, worth shutting down the economy for? While this number is constantly changing, it takes into account the 21% of people in New York City found to have antibodies on April 23rd. Extrapolating these figures brings the mortality rate in America to about .07 percent. While this is still larger than the flu’s rate of about .02 percent, the number is still microscopic. Does this .07 percent warrant an economic shutdown, causing perhaps more damage than the virus itself? Why have we shut down the economy?

While COVID-19 has caused the economy to shut down, we must analyze how economics infiltrate other areas of our lives. Often, our relationships with people mirror the economy, serving as transactional. Like my relationship with my father, many parent-child relationships are transactional, as parents typically provide their children with resources to succeed. This dependency on parents often stems from a standpoint that children believe that their parents are unequivocally correct in all that they do and say. COVID-19 has shown me that just as the economy has shut down, these transactional relationships can shut down too. Prior to this pandemic, I was often hesitant to argue with my father or really engage in any controversial conversation with him. This was because, as I’m sure you can tell with just a glimpse into some of our conversations, it is very difficult to argue with him, especially since I was taught to believe that anything he said was the truth.

Now, rather than mindlessly accepting the information he has told me, I’ve realized my own capabilities of analyzing current events and forming my own opinions. Contributing to conversations with him with the understanding that like any human, he could be wrong, has bettered our relationship. While we’ve been arguing, these respectable conversations have brought us closer than ever before, partially because of our inability to leave each other’s sides throughout this quarantine. It is important to transcend the typical boundaries of transactional relationships and move towards transformational ones, improving the interactions in our lives. As the economy has shut down in the public sphere, we must shut down these transactional relationships in the private one as well. So, the real question should be: why shouldn’t we mirror the economy in our personal lives now, as we often do?

Laughing at the End of the World — is that okay?
Health