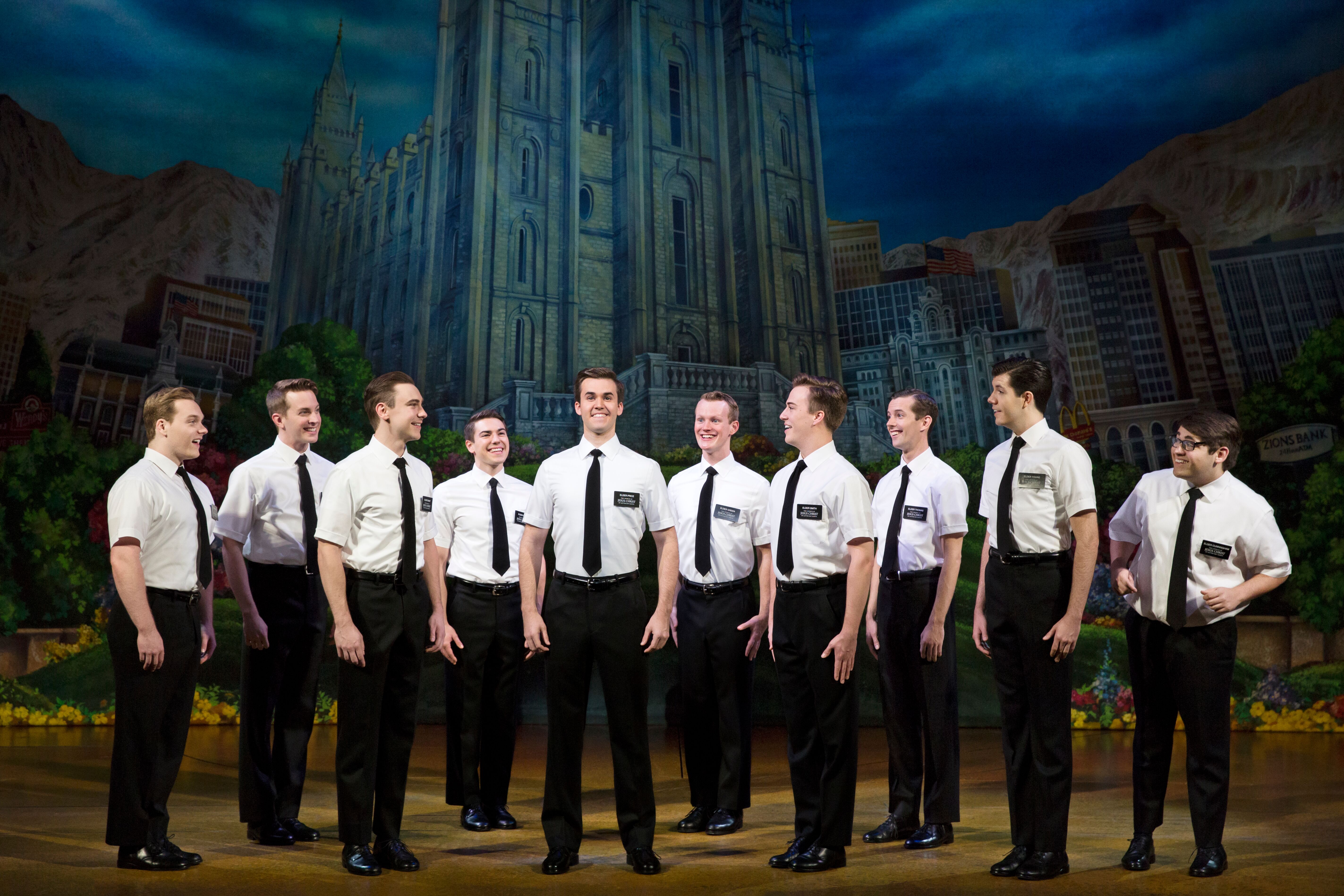 On Wednesday evenings, Victoria Shaw logs onto the weekly Zoom call to join the rest of her congregation. She is greeted by 50 smiling faces, all members of her French-speaking Kingdom Hall in Queens, New York. They read scripture, sing hymns, and discuss the current issues plaguing Jehovah’s Witnesses around the world. By 7:00 PM, the congregation is deep in prayer over the medical researchers’ development of a COVID-19 vaccine based on blood transfusions.

As the world grapples with the devastating effects of the novel coronavirus, scientists are racing to create a vaccine. A recent effort from the National COVID-19 Convalescent Plasma Project involves injecting the antibodies from recovered patients into another individual’s bloodstream. Although this sort of treatment is still in the early stages of research, the sheer notion of a blood-based vaccine is enough to terrify Jehovah’s Witnesses like Victoria.

Jehovah’s Witnesses, a millenarian denomination of Christrianity, follow strict guidelines regarding the use of blood in medical practices. Each member carries a “Health Care Proxy” card, declaring his or her desire not to receive a blood transfusion for any reason as stated by Acts 15:28, 29. Even in dire circumstances, Jehovah’s Witnesses would literally rather die than compromise their beliefs.

While most vaccines, such as that for the common flu, are manufactured, the proposed COVID-19 blood vaccine involves directly transferring plasma from one individual to another. According to a report by the Milwaukee Journal Sentinel, over 100 researchers and 40 hospitals have joined the NCCPP, while the FDA has already approved six of the organization’s clinical trials. Despite widespread excitement over a cure, Jehovah’s Witnesses contend that a plasma-based solution would be a gross violation of their beliefs.

During their Wednesday night meeting, Victoria’s congregation ruminates over medical researchers’ various efforts to fight COVID-19. An elder, one of the group’s leaders, anxiously shares an article about Harvard’s advancements in plasma testing through the development of an antibody-detection tool. Another member counters with reports of volunteers in Seattle receiving their second dosage of a non-blood vaccine, the most promising treatment thus far. Together, the congregation prays for a cure that aligns with their beliefs.

Their efforts, however, aren’t confined within virtual meeting spaces. Jehovah’s Witnesses use their official website to spread positive information on the benefits of avoiding the use of blood in all medical treatments. They feature video interviews with physicians who thank the JW community for pushing doctors to “consider the possibility and importance of reducing the use of blood.” Jehovah’s Witnesses Examiner, a Facebook page with more than 330,000 followers, allows Witnesses from across the world to share articles and messages about the power of prayer against the coronavirus. Surprisingly, no data has been made official on how many lives have been saved by the group’s thoughts and prayers.

These types of online interactions have become increasingly important for Jehovah’s Witnesses, who are now restricted from sharing their beliefs in person due to shelter-in-place policies. Before the novel coronavirus outbreak, Jehovah’s Witnesses spread their messages through “service,” or going door-to-door to engage with the larger community. There is a collective sigh of relief that Jehovah’s Witnesses have to adhere to stay-at-home orders as well, as it’s much more difficult for residents to pretend they’re too busy to learn about our Lord and Savior Jesus Christ while under quarantine.

“It’s been difficult to not go out on service because I think people would be especially receptive to our message right now,” said Victoria. “In all of the uncertainty, there’s a lot of comfort in religion.”

While many people may agree with Victoria’s sentiment, it might be difficult to convince people to join a religion where they would potentially have to refuse a life-saving coronavirus vaccine. Jehovah’s Witnesses already have one of the lowest retention rates for U.S. religions, and asking recent converts, who make up 65% of the current JW population, to practice social distancing for, well, forever, may cause some drops in the ranks. She additionally notes her frustration with the medical researchers who pursue a plasma-based vaccine over a non-blood treatment. 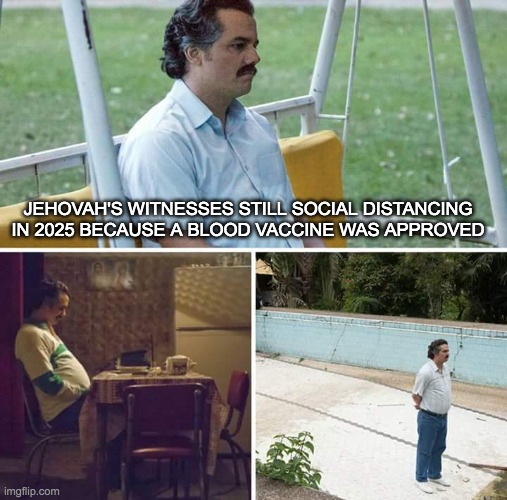 “I feel as though it’s very unfair,” she says. “There are other ways to treat coronavirus, so why would they focus their attention on a vaccine that not everyone can use?”

While it seems unlikely for the FDA to cater its research to the religious beliefs of 1.2 million individuals, Jehovah’s Witnesses may have hope. Currently, blood plasma containing the necessary antibody to fight COVID-19 is in short supply, allowing for limited research on its results. The explosion of easy-access antibody tests have proved problematic, curbing an expected increase in blood donors who were previously unaware they contracted the virus and developed antibodies.

Despite the scales tipping in their favor, Victoria says her congregation will continue to pray for a non-blood vaccine until one can be made public. In the meantime, the rest of the world can pray for a return to the days when Jehovah’s Witnesses freely knock on our doors and we can plausibly pretend that we’re not home.

There is just no where to even begin to explain how twisted this article is in every way.
Journalism at its worst.

Baffled at commentators who talk about apostates as equating to spreading false information & propaganda. Normally you hear the word used in the context of people who leave political parties but if a person chooses to leave a religion it is a personal choice and it certainly doesn’t equate to them as ‘spreading false information’ or ‘propaganda’. It sounds a bit Scientology – they talk about people who leave as ‘SPs’ or ‘Suppressive People’ and they are viewed/treated very badly by Scientologists. Just a little bit scary when you join a group (religious, political, etc) and can’t leave (without consequences/pressure/persecution etc).

As a researcher working in mental health we draw on a range of views when evaluating a service – people receiving, who have left the service, who are delivering it, who design and run it -etc etc. All have unique perspectives that build up a picture of the service and how the different stakeholders interact. Dismissing one stakeholders view as ‘false’ because they are from a particular stakeholder group (I suppose apostate could refer to people who leave a service and decide to never use it again?) would make for poor research.

As another commenter said, the website mentioned below is an apostate website meant to spread false information. You can always find complete and correct information regarding what jehovah’s witnesses believe on www.jw.org

For the last guy who commented, sir you’re spreading false information and promoting a false Jehovah’s Witness’s website – the correct one being JW.ORG – please stop spreading apostate propaganda. Jehovah’s Witness’s are smarter than you think and we would all appreciate it if you went to jw.org and read more about what we are all about. Jehovah loves and cares for everyone and by us abstaining from blood, were letting Jehovah protect us through His word.

I know this post is area specific, but I would like to remind everyone that not only 1.2 million witnesses exist in the whole world… There are over 8 million Jehovah’s Witnesses out there (and that’s all google cares to take note of, as I’m sure there are many more out there)

Blood-based vaccine? No thanks. I will definitely rather take my chances with covid.

As this pandemic keeps running along there doesn’t seem to be any end in sight! As for the ‘Vaccine’ its bringing back memories from the 70’s when there was the ‘Swine Flu’ Vaccine I like most people avoided that ‘Vaccine’ ! Saving myself from harm, well with this oncoming ‘Vaccine’ I will be cautious just like that 1970’s Vaccine, this new vaccine is coming on too fast! Act 15:29 admonishes it’s reader to abstain from ‘Blood’ ….Blood means life. I’ve read many accounts where organ recipients felt their lives were changed to the extent of they took on their Organ Donor ‘s mannerism, there’s a documented account where a young girl who was murdered and thru her Donated Organ it helped identify the murder. Respect Blood? yes, it means Life.

What is most interesting about these comments is that they demonstrate just how little the average Jehovah’s Witness knows about the blood policy the Watchtower leadership has created. The vaccination ban was dropped in 1952 by the organization. Some vaccines contain a tiny fraction of a blood component. This is permitted and has been used for almost 7 decades. Since 2000 the policy was adjusted to permit the use of 100% of blood in fractionated form. This includes the use of very large fractions like hemoglobin. With respect to treating Covid-19 it is hoped that the antibodies can be isolated and developed into a vaccine. If that happens Jehovah’s Witnesses can, and most will accept it. In the meantime, convalescent plasma has been FDA approved for treating Covid-19. While all of the fractions of plasma are acceptable for a JW – plasma is not. There is a workaround, however. Remove any fraction from plasma and its not plasma anymore. Such is the case with Cryo-poor plasma or Cryosupernatant. This blood product does not contain the clotting factors used to treat hemophilia. However, it does contain all or nearly all of the immunoglobulins. To learn more about Jehovah’s Witnesses and the Watchtower’s blood policy there is an excellent online source of information at: HTTP://www.ajwrb.org

Controversial conversations with my dad about COVID-19
Health

Coronavirus, my chronic illness, and the alternative
Health