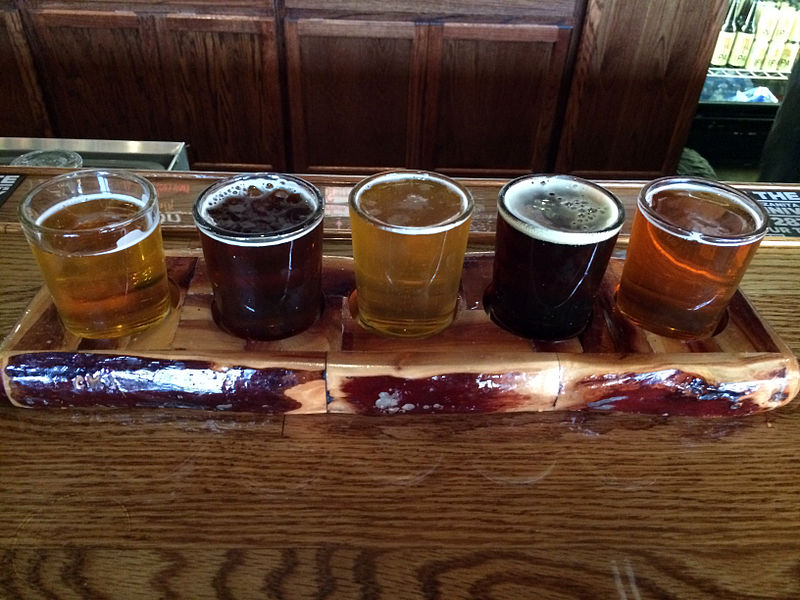 The new world of beer where you get to make choices rather than dealing with your options. (Photo: Wiki)

When bars and restaurants shuttered citywide, New Orleans breweries were among the innumerable businesses now facing significant declines in sales and new orders.

While these drops in beer sales continue, local and regional breweries have found ways to shake up their business models and keep their doors open–at least for curbside pickup–while also playing their part in local recovery efforts. For example, NOLA Brewing offers discounts for emergency and hospitality workers, including 25% off orders of a case or more.

But beyond product discounts and supportive marketing messages shared online, New Orleans breweries have made clear their commitment to serving the community during quarantine and long thereafter.

“We found that essentially we’re some of the only businesses that are allowed to stay open,” said Brieux Carre Brewing Co. owner Robert Bostick. “It’s important that we still reach out in any way we can. While we’re all struggling to make sure we can keep our employees, there’s still things we’re able to do.”

Several local area breweries have been able to directly contribute to alleviating the current stress on the healthcare system by pivoting some of their brewery operations to packaging and distributing bottles of hand sanitizer.

Not long after the quarantine took effect, the staff at NOLA Brewing quickly transitioned some of their usual tasks for beer to hand sanitizer. As a result, the brewery has been able to retain all of its employees as well as land contracts with major local healthcare networks, including Ocshner and East Jefferson General Hospital.

“It’s been able to do quite a bit for the company and the community itself, so it’s been a really, really cool process to see my team adapting, and just take this head on and really have pride in what we’re doing right now,” said Dylan Lintern, president and COO of NOLA Brewing.

Urban South Brewery too began transitioning to hand sanitizer packaging and distribution just a few weeks after the citywide quarantine went into effect. The brewery was able to utilize its existing bottling system for hand sanitizer while continuing to can beers sold to the public.

On a smaller scale, Brieux Carre has also begun its own hand sanitizer efforts, primarily to local nursing homes and other smaller institutions as well as customers coming in to pick up their orders from the taproom curbside.

With hand sanitizer shortages reported at grocery stores and other retailers citywide, these efforts to expand local distribution of hand sanitizer serve to support both individual citizens and local healthcare businesses. 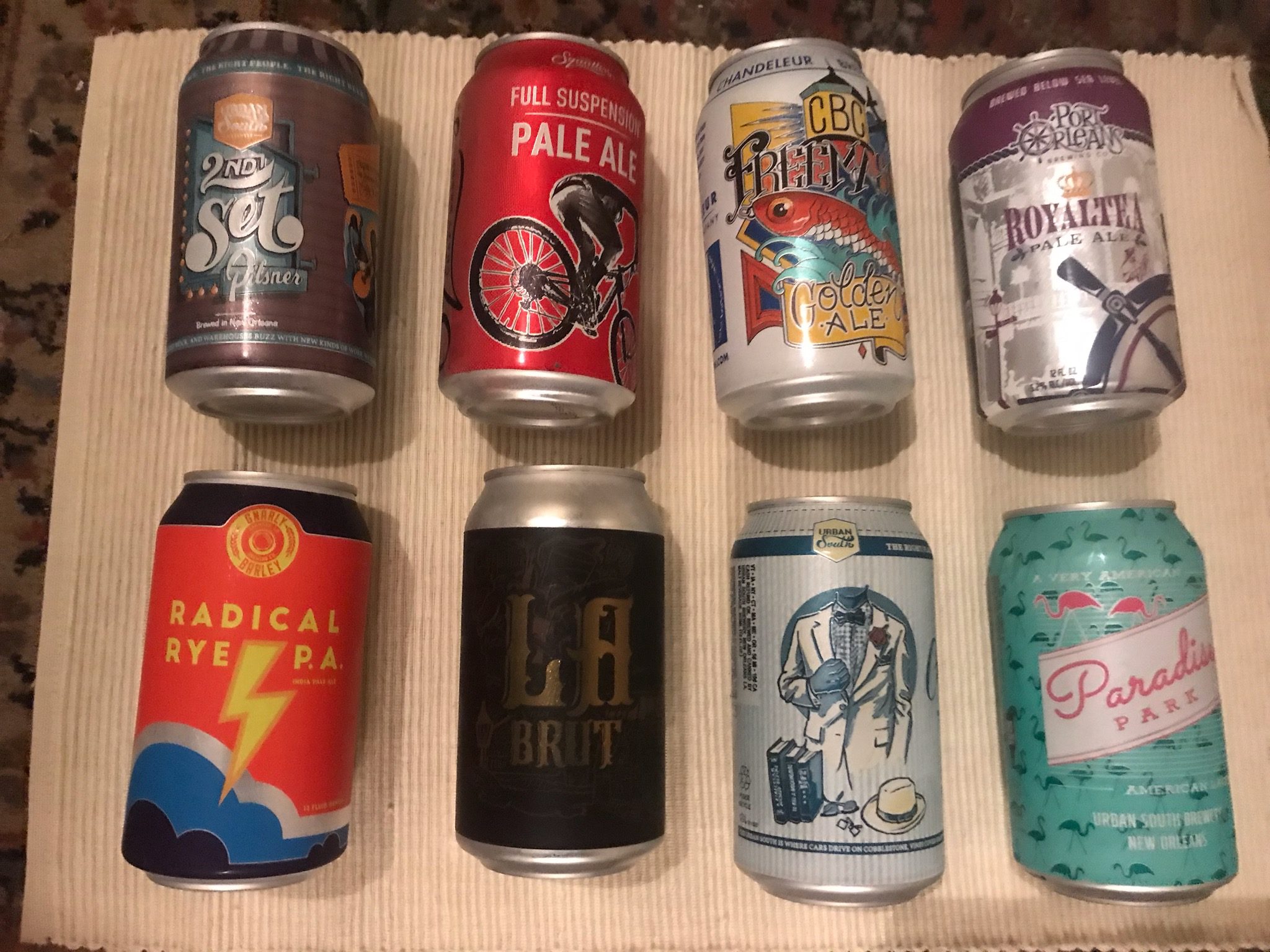 Look out six-pack; we’ve got an eight-pack for you. (Photo by: Kevin Horne)

NOLA Brewing has topped off its usual events series to accommodate customers quarantined at home. In addition to a virtual edition of its weekly Taproom Yoga classes with Elevate Yoga, the brewery now hosts Friday Night Flights, a virtual beer sampling session featuring a new flight of beers each week.

After purchasing and picking up curbside the flight of beer for the week, attendees can tune into the livestream on Friday from 6 p.m. to 7 p.m. The session features a discussion on the curated selection of brews, including general-level knowledge for, questions from and interactions with the consumer audience tapping into the livestream.

Urban South has also experimented with livestreamed events, particularly the free three-day concert series Porch Fest hosted in mid-April. The idea for the event came out of brainstorming potential beer names. They hoped this beer name would help lighten the mood around customers being stuck at home and unable to visit the brewery’s taproom or attend large-scale festivals and events this spring.

“Our marketing director had the idea to create our own Porch Fest,” said Amber Gunn, taproom operations manager at Urban South Brewery. “We had the idea first for the beer where you can just sit on your porch and listen to music and enjoy a beer. But we actually had a real life Porch Fest where these bands played at home and broadcast and enjoyed some Urban South beer, and encouraged others to be able to tune in, listen and drink their beers.”

In With the New

One aspect of quarantine that has been most daunting for New Orleanians across the board is finding something new and appealing that stands out from the humdrum of one stay-at-home day into the next.

To combat this stale malaise, Urban South began releasing new products in small batches each week. This has enabled the brewery to reach customers with beers they’ve been experimenting with as well as spotlight beers brewed for its four-year anniversary party, which would have been held April 4th.

These products also serve Urban South customers who were acclimated to regularly visiting the taproom for fresh keg pours and exclusive beers on tap.

“I would say it’s our loyal fan base that we’ve already established because we’ve had such a presence in New Orleans; we’ve grown exponentially over the last four years,” said Amber Gunn, taproom operations manager at Urban South Brewery. “Just in general, the amount of people that we have coming in, the amount of sales that we make outside of our taproom just from transitioning to to-go beer — people that would normally have been coming to our tap room to hang out on the weekends are now still coming and purchasing to go beer and just enjoying it at home.”

Brieux Carre too, upon switching its operations to 100% canned beer, has dabbled in swapping in-person interaction at the taproom with sending customers home with exciting new beers to try in the comfort of their home.

Some of these brews go one step further by benefiting a local cause or nonprofit organization, such as the All Together Worldwide collaboration, which the brewery released in April with proceeds benefiting the Greater New Orleans Foundation.

Collaborative beers benefiting local organizations have also come from multiple statewide and regional breweries. The Guavatational Pull IPA was this year’s Collaborative Brew from the local chapter of the Pink Boots Society. Partial proceeds from sales of the beer, which is available for order and curbside pickup from Gnarly Barley Brewing in Hammond, benefit the local Pink Boots chapter. This organization provides education and scholarship funds for women in the beer brewing industry.

“It’s for a good cause too — it’s not just another beer,” said Nikki Williams, Pink Boots member and manager at Gnarly Barley Brewing.

Along with the buzz from these new products, beer lovers can also enjoy the feel-good sensation of giving back to local businesses and nonprofit organizations supporting local hospitality workers.

Abita Brewing Co., a long-time flagship brewery of Louisiana, has seen numerous other hardships befall the state over time, and this pandemic has been on par with others that New Orleanians and Louisianians have overcome in the past. As such, Abita has found its own unique ways to support the community, its interests, and its artisans.

“Louisiana is a resilient state so whenever there is need, we tend to come together to help one another,” said Heidi Guerra, marketing manager at Abita Brewing Co. “We [at Abita] have partnered with numerous restaurants and organizations to donate beer and root beer for meals that are being provided for those who need it most right now.”

“We have been spotlighting local musicians, artists and businesses on our social and digital platforms,” Guerra continued. “And we have been sharing various recipes, drink mixes, beer crafts and even coloring sheets to help our fans unwind and try something different while they are home.”

From hurricanes to Hurricane hangovers, New Orleanians have been faced with a spectrum of challenges over the city’s long and culture-saturated history. This quarantine, like any other state of adversity, has inspired locals and local businesses to support and appreciate one another in ways many may have taken for granted before.

“Louisianians come together and take pride in our state, our culture and our products,” said Guerra. “We are all doing our part currently by staying home, shopping local restaurants for take-out, etc. When everything starts opening up, it may be slow at first, but people are going to support the local businesses–it just may be different than what we were once used to. Once we are all back open, we can all have a beer together!”

[…] they have elsewhere, breweries in New Orleans have pivoted to making hand sanitizer. But they’ve also started mini-releases of […]

Thank you for this most excellent report. Well done!