How a meme reveals the grim reality for small businesses 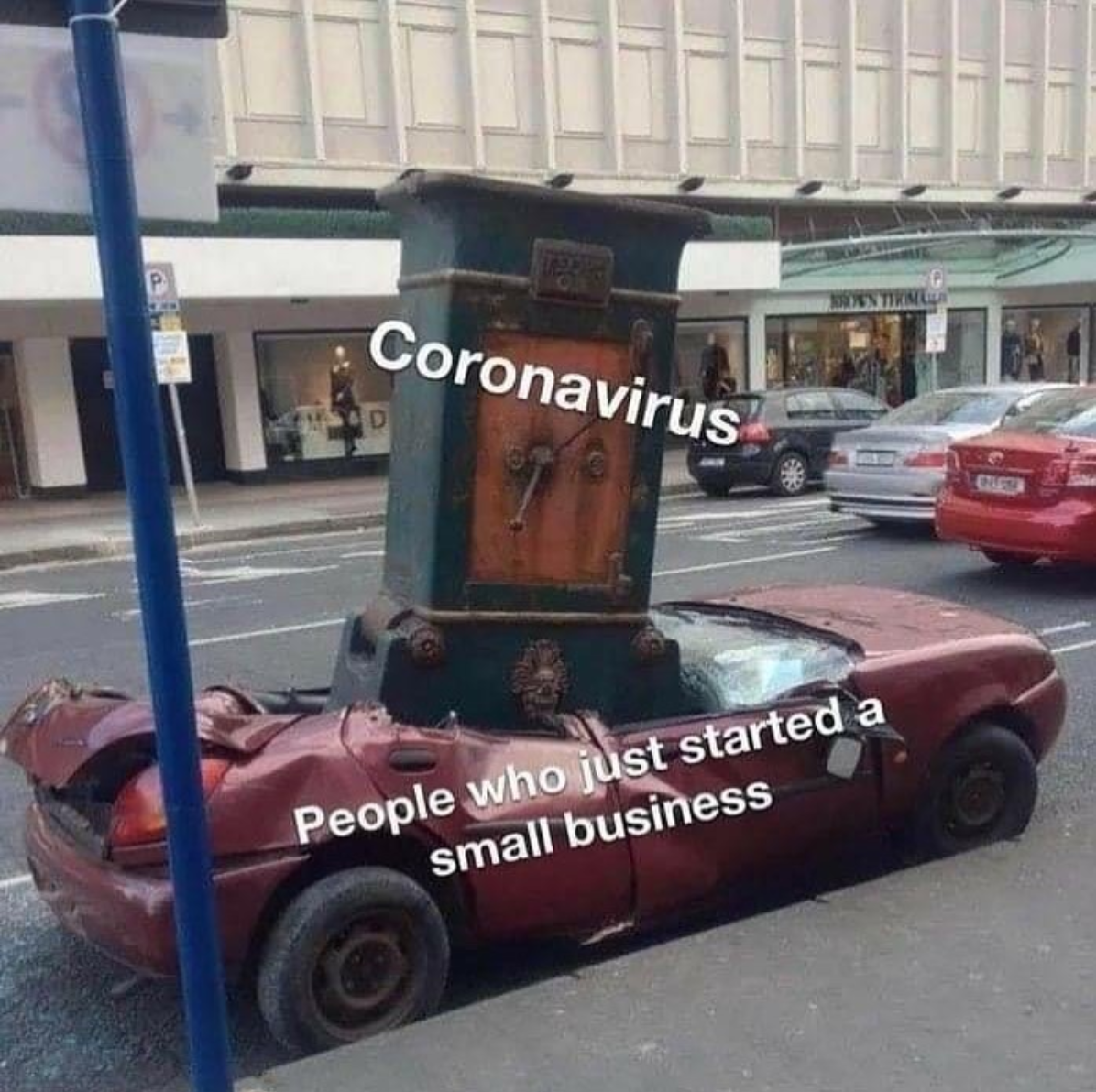 The Meme that hits a bit too close to home.

A meme was posted on Instagram. It depicts a large grandfather clock sitting atop a destroyed, crushed car. The clock is labeled “coronavirus” while the car is labeled “people who just started a small business.” This imagery, although meant as a joke, accurately depicts the feelings that small business owners, new and old alike, are currently experiencing: a sense of feeling trapped. My father, the owner of a small real estate business in New York, quarantined himself for 2 weeks out of fear he was showing symptoms of the COVID-19 virus. Despite health-related anxieties that carrying the virus would present, my 54-year old dad spent most of his time in quarantine figuring out how to run an effective office as well as adequately serve his customers while nobody can come into work.

When asked what concerned him the most about the nation’s impending time in quarantine, my dad explained he was worried about efficiency in business transactions: “Payments that are due to my business might not come in on time, and I will be late paying other people I owe money to for business.” Additionally, in regard to the everyday operations of his office, my dad noted: “Things that might ordinarily take 15 minutes to an hour, can take up to a day now or even days.” Aside from the mental effects we are all feeling due to social isolation, small business owners are left with extra work-related concerns to deal with. In my dad’s case, he is figuring out how to deal with tenants who are now home more than they would be otherwise: “There is an uptick in tenants reaching out to us… We would get complaints about one tenant smoking or making too much noise. Now those tenants are home a lot more, and the tenants who are being affected by this are also home a lot more.”

For my dad, he certainly seems to be filling the role of the trapped car in the aforementioned meme, caught in both the social and fiscal challenges the coronavirus presents. In addition to his own personal worries regarding his health and safety, he is dealing with both social isolation as well as the supplementary obligations being introduced from his work. This is not unique to small real estate businesses. Small restaurant owners, forced to temporarily change the way they operate, could also be stressed out about the future of their establishments. Small gyms and hair salons have also been thrown to the side, unable to generate any revenue for the time being while they are forced to shut down. And what happens when these business owners and their employees are unable to generate enough revenue to meet their rent? A cycle becomes apparent that fulfills the fears my father expressed in the paragraph above, bringing it all back to his own company.

When I initially scrolled past the meme on Instagram, I laughed, not thinking much about the realities of those small businesses actually being depicted in the role of the car. However, when I analyzed the situation by looking at the crushed car in the shoes of a small business owner who is very close to me personally, I realized how serious and intimidating this situation must actually be for anyone with economic uncertainty at this time. Also of note, my dad’s small business has been established for more than 20 years, so he at least has some economic stability to lean on. I then felt concerns for the new small businesses the meme initially refers to, who may not have years of income to fall back on during an economically challenging time like this.

I spoke to my dad again after our interview, and when I showed him the meme, he responded by laughing and admitting: “It’s funny because it’s true.” Despite the bleak situation being depicted by the meme, there is something cathartic about channeling these economic anxieties into satire to then be shared on the internet. Dustin Griffin, writer for the University of Kentucky Press, argued that satire is gratifying to many because “…we take pleasure in representation for its own sake, whether the object represented be beautiful or ugly… we are moved to pleasing laughter by ‘the representation of deformity.’” It is the seriously troubling reality for small business owners that gives this specific representation of deformity its humor.

Despite the uncertain economic road that lies ahead for my dad and others who own businesses like his, funneling fears and anxieties into a satirical outlet is not a bad idea in terms of trying to keep a positive mentality in these trying times. While social and emotional consequences of mass-quarantining are heavily focused on by the media, it is important to also recognize that for many, these feelings of confinement and restlessness are compounded with fiscal concerns too. While there are strategies being suggested for dealing with mental stress while in self-quarantine, there is little that can be done for small businesses to change the direction they are already heading in now. This refers to both the immediate lack of customers in some cases, as well as difficulties in functioning outside of the office. With this impending sense of an unpleasant fate looming amongst our economy, perhaps satirical memes are, ironically, a means by which we can find slight perverse amusement.

Hear/Here: The Psychological side of transactional eating
Restaurants

How will culture survive in the “new normal”?
Art and media

During a time of panic, meme quality is at an all-time high
Humor