Coping with corona: Do artists have to make work about the crisis?

The Arts in and of themselves are a vague and complicated group.  It has so many forms, some more accessible than others. Throughout most of human history, however, art has been defined by the era it exists in.  Historically, Art was used as a form of storytelling and propaganda. Leaders across the globe, both political and religious, have used art to cement themselves a little spot in time for all to see.  Think of the grand statues of pharaohs in Egypt, or ceiling of the Sistine Chapel in the Vatican. In 1833, as a response to the state of Art at the time, French poet Théophile Gautier wrote “l’art pour l’art” or “art for art’s sake.”  This was the first moment in a great shift for the arts. Now freed from the motivations of leaders and holy men, Art bloomed into many new and complex forms.  New subject matters rose and fell, controversy became a powerful tool, and over time Art continued to revolutionize itself.

Today, we are just as likely to find Art clinging to the underside of bridges and highways as we are to see it sitting quietly in a gallery somewhere.

Arts purpose and meaning is not as clear as it once was. All art however, no matter how conceptual or visual it may be, is created by an artist. Artists are problem solvers who live on the fringes of society. They translate what is “not yet imaginable, but sensed, into something at least imaginable represented in image, drama, literature, music, etc…”  It is all well and good to explore the realm of the unknown when the world is spinning as it normally does.  But what of times of crisis. When the world has been turned upside down, is it okay for artists to be off thinking about reality or questioning our understanding of connection and interaction.  What is the role of artists in a crisis? Do artists HAVE to make work about the crisis? 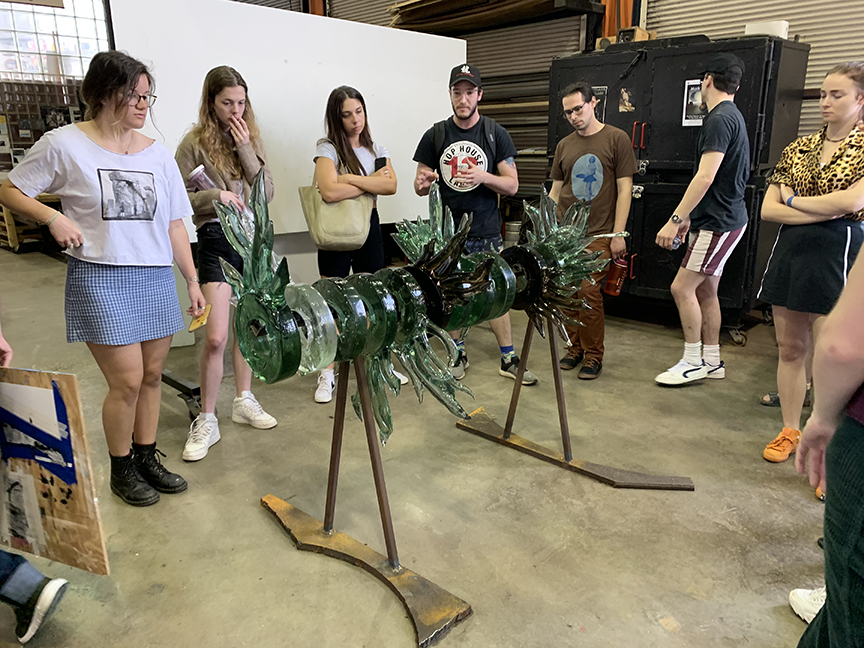 My own personal answer to this question would be no, artists do not have to make work about anything.  It is true that artists, especially visual artists tend to document through their work — their own responses to the world.  However, artists are not some group of enlightened beings that wield some kind of great power to enact social and political change. They can make powerful and timely work, but it is up to each individual artist; there should not be some kind of social duty they feel they must fulfill beyond that of every individual.

In my own practice, the power of an artwork comes from the process. Taking a problem, manipulating it into hundreds of smaller problems, and then slowly working through each one to find a clever and creative solution.  The resulting artwork then is not the objective, but the outcome of all those solutions. I don’t view my work as some magical artifact with the power to grant people epiphanies about their lives; I don’t view it as work that should be focused on during crisis times.

To get a broader perspective I wanted to ask other young artists their opinion. Emma Conroy is a graduating bachelor of fine arts at Tulane University. Someone just now entering the art world and a part of the next generation that will define what art is and should be.  In asking about her role in society during our current pandemic crisis, she said, “For those looking to me, or any other artist for an answer, we don’t have one.” She explained that she was just as lost, frustrated, and confused as everyone else, and that she had a right to be so as someone going through the same struggles.

An interesting point that Emma did bring up in our conversation was that she did believe that her skillset could help people. Taking her feelings of confusion, frustration, anger, worry, etc… and aestheticizing them, would perhaps make them more accessible to viewers, and in doing so, remind them that it was okay — that it was normal — to feel all of those things.  She also said that in the future, there was a possibility for art to document and critique the responses by larger governing bodies to our predicament.

Artists are not reporters; they are not bound by the here and the now and have no obligation to society to be even relevant. They can make extremely moving and powerful work that pushes the boundaries of collective consciousness, or they can make work that is moving and powerful to none but themselves.  Perhaps in the future I will make a piece about COVID-19, maybe the MoMa will have an exhibition entirely devoted to pandemic art in the coming months, but artists should not now, nor ever, feel some greater social obligation to make work about a topic that does not naturally result from their creative process.

Our future is our past: An artful look at pandemics
Art