My evening with Ellis Marsalis

Editor’s Note: We will miss you Ellis Marsalis. Hearts all over New Orleans are breaking for you, and in honor of your music, your joy, and your love that you brought to New Orleans, we are remembering nights we spent with you and your music. Here’s a story of when one listener fell in love with Ellis Marsalis. This piece was originally published on October 2, 2017.

“In other places culture comes down from on high. In New Orleans, it bubbles up from the streets.”-Ellis Marsalis 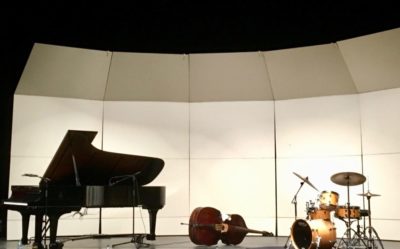 Getting ready for Ellis Marsalis (photos by: Lillian Alford Patterson)

I should begin by saying that I know nothing about jazz. Zip, zilch, nada. Not a single thing. So, this will not be a critique and if it were, there would be no criticisms to make.

The stage at Dixon Hall is framed by just enough golden gilding to resist gaudiness but promise something transcendental. Even the seats create a sea of bright red fabric, and I found my spot in row K, on the middle right hand side of the theater.

Like any good cultural student, I did a bit of research on Ellis Marsalis the evening prior, and from that research, I knew that I wanted to be able to see his hands move across the keys of the piano. I found what I believed to be the right angle—only after a few attempts, sitting, assessing, then moving again—and made myself comfortable.

The stage was simple. A freshly polished Steinway grand piano stage right, a double bass tilted on its side in the center, and a seven piece drum kit to stage left.

I watched as the auditorium began to swell with bodies, some older members of the New Orleans community–people I imagined were seasoned jazz enthusiasts–and those much younger college students. I was surprised by how many attended. I imagined it was a required part of their curriculum at Tulane, but I remembered what city I live in and thought that perhaps, these young students had come on their own accord.

Professor John Joyce, a jazz enthusiast and educator himself gave a brief introduction saying, “…as Ellis Marsalis said, jazz bubbles up from the streets and as I see it, he was produced from that.” As he left the stage the room hushed for a moment.

Walking slightly hunched over a cane, Ellis Marsalis shuffled from behind the curtain and took his seat in front of the piano. The room filled with enormous applause, but Ellis did not react. He simply put his fingers to the piano keys and waited for his fellow musicians to join him on stage.

On bass was Jason Steward, on drums, Joe Dyson. Both men, like Ellis, are New Orleans natives.

With that, there was no hesitation and no preamble. Ellis began to play and the other two followed, occasionally looking over to Ellis. Was it to keep time, to see his mood, to look for cues? I wasn’t certain, but what I could tell was that Ellis Marsalis was the heart of the operation.

The first song was lively and light. Ellis had no sheet music. None of them did, and they didn’t seem to need it either. I watched Ellis’s fingers gently glide over the keys. It was almost like he did not need to apply any pressure to them, but as though he could simply will them to produce the desired sound at the right time.

In the interlude between the first and second song, the saxophonist Derek Douget, joined the three musicians on stage. As he played, his fingers ran vigorously and freely, up and down the neck of his instrument.

It was the kind of music you would sway your hips to. I found that my feet were unconsciously tapping to the beat, my torso swaying slightly.

As the program progressed, I was completely taken by the drummer. How can one person create so many layers of complex sound as though there is not one of him, but ten of him? How can he move with such ease?

The bass player closed his eyes as he played, his mouth moving to mimic each note he plucked.

Ellis was not the loudest player on the stage, nor the most verbose, but all eyes were on him. Even with the plunking bass, the pulsing drum, and the bellowing saxophone, the piano rang through strong and true.

Occasionally Ellis looked up to give a quick smile, possibly to the audience or his fellow musicians, and sometimes it seemed as if he was smiling to the music itself.

Following the concert, the audience was permitted to ask a few questions of Ellis and the other musicians. The inquiries were wide ranging, but what I could see more than anything was how loved this man was in this city, his place of birth. One audience member asked him what it was about New Orleans that made him the musician he is today. Ellis paused, “If there is such a thing as a city having DNA, New Orleans has music in its DNA. New Orleans is fertile soil. Musicians can grow here if they tend to their practice.”

New Orleans nurtured Ellis Marsalis into the musician he is today—a gift to this city and patriarch to the first family of New Orleans jazz—and how lucky we are that he was born here and to have him still, creating something so indescribably and intangibly beautiful.

They played a seven-song program, but I wish the music could have continued for hours. I still don’t know anything about jazz, but I know that I have been converted.

The poetic city: “Where the Sidewalk Ends – Your Life” The following series "Car-free Commute" is a week-long series that looks at how being car-free in the Big Easy is hardly ever care-free. Amid time-shortages, potholes, frequent showers, and Louisiana heat, choosing the best form of car-less transit can be tricky, and here writer Folwell Dunbar takes on those sidewalks that are like no others.

A recipe for the ‘the jass’
Music
We use cookies to ensure that we give you the best experience on our website. If you continue to use this site we will assume that you are happy with it.Ok