School shootings and the perils of media contagion

Editor’s Note: We love media; we are media. As we stay glued to our televisions, our phones, and our social media for updates about COVID-19, we know the integral role it plays in our lives. Alexa Kravitz also looks into how the media can cause the spotlight to shine where maybe it doesn’t need to in this piece about a shooting that occurred at her school. 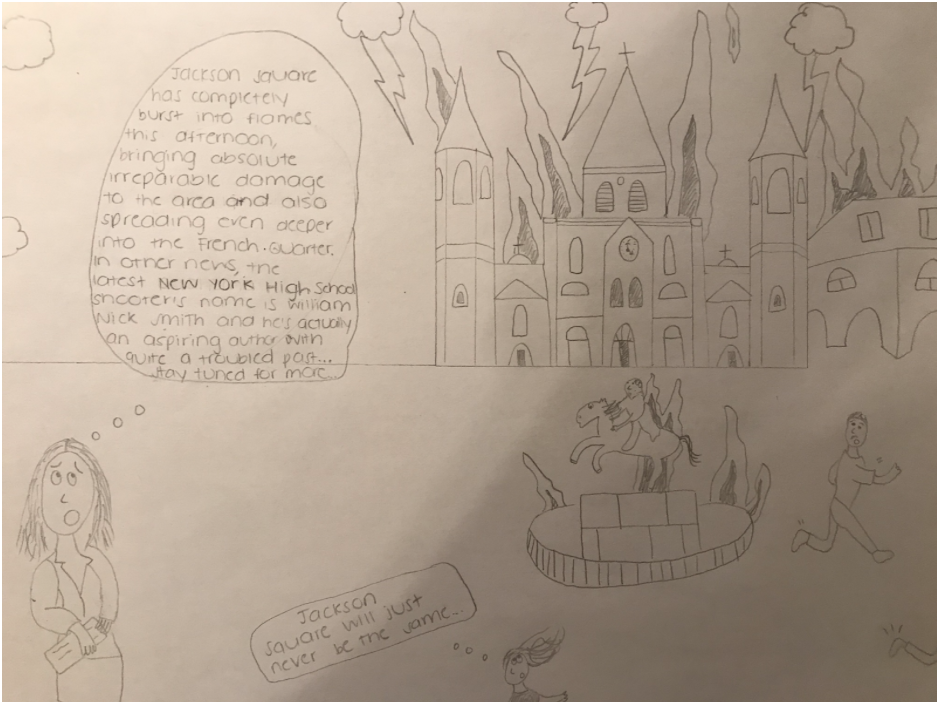 When a 19-year-old former student entered my high school on February 14th, 2018 and shot 34 of my former classmates, coaches and teachers at Marjory Stoneman Douglas High School, my high school was completely rebranded as the site of the deadliest high school shooting in United States history. I was forced to watch as my picturesque snow globe of a town was shaken up and broadcasted across every station on television. Students who were once strangers to Parkland, Florida suddenly knew every minute detail about students who had passed. Perhaps the factor most uncomfortable for me, however, was that the criminal who had single-handedly turned my hometown upside down by taking the lives of 17 people in 6 minutes and 20 seconds had been transformed into a celebrity overnight.

Just hours after the shooting — before the police had even announced the identities of the deceased — the news had thrust the shooter’s life into sharp focus. His face permeated the headlines of news networks such as CNN, NBC News and Fox News. This played into something of a bizarre variation of yellow journalism, as described with “We must recognize that in its [yellow journalism’s] sensational elements, though it does not appeal to what we are accustomed to call the better part of ourselves, appeals to something lying deep in us” (4). We feel a magnetic attraction to the flaws of others depicted so blatantly in news broadcasts that encourages us to inquire further about disturbing details of criminal acts. This is because we utilize flaws of others as a measuring tool to reaffirm normalcy and sanity in our own selves.

In the American Psychological Association’s article, “’Media Contagion is Factor in Mass Shootings,” Jennifer Johnston of Western New Mexico University stated, “The prevalence of these [mass shooting] crimes has risen in relation to the mass media coverage of them that glorify the shooters and downplay the victims,” and “A cross-cutting trait among mass shooters is desire for fame, which skyrocketed in correspondence to the emergence of widespread 24-hour news coverage” (10).

While the news undeniably has a duty to cover events truthfully, the value of human life must be prioritized over the content of coverage, especially when the presentation of news has the ability to help mass shooting perpetrators achieve the fame they desire. From February 15th to March 5th the Parkland shooter had $630 deposited into his prison commissary account sent in by “fans” (3). Teenagers, women and older men sent photos, cards, and letters to the Broward County Jail in the hopes that they would fall into his hands. Countless Facebook communities were even created to discuss ways in which the murderer could be helped, proving that this twisted route to fame actually “works.” There is also the problem of copy-cat events- inspiring others to copy these violent crimes with similar acts- an idea known as the media contagion effect (10). By focusing extensive media coverage on perpetrators of mass shooting events, the news media glorifies the shooter and creates incentive for such copy-cat crimes.

In a discussion of the potentially contagious nature of mass shooting violence in the United States, Jillian Peterson, a criminologist at Hamline University told NPR that, “There is this element of wanting notoriety in death that you don’t have in life. So when one happens and it makes headlines and the names and pictures are everywhere and the whole world is talking about it, that becomes something that other people see as a possibility for themselves” (2).

In fact, there’s clear evidence that past shooters acted out of inspiration from past tragedies. The shooter at Santa Fe High School in May of 2018 wore the same attire and brought the same weaponry used by the gunmen from 1999 Columbine shooting. The 2012 Sandy Hook Elementary School shooter had a spreadsheet of materials used by the Columbine attackers and kept a copy of the official Columbine investigation (6). The Virginia Tech student that killed 32 at the university in 2007 expressed a written desire to repeat the Columbine shooting. USA Today reported that there were 638 reported copycat school shooting threats nationwide in the 13 days after the Parkland shooting alone (8).

What’s interesting is that while the media has been hyper-focused on depicting elaborate analyses of the motivations of mass shooters, thousands of incidents of gun violence go without mention on a daily basis in the news. For example, New Orleans is one of the world’s most celebrated tourist destinations. People travel from all over to sink their teeth into a sugary beignet or to listen to the jazzy sounds of Frenchman Street. However, very rarely do visitors ever plan a trip to investigate the gun violence epidemic in the city- mostly because it isn’t something that’s openly discussed. In 2019, Everytown for Gun Safety reported that “New Orleans residents face a gun murder rate 11 times greater than other Americans” (7). In 2018, the city faced 145 homicides- the lowest total number since 1971. However, few of these shootings merited more than a 10pt font headline buried in the pages of a local newspaper.

Why then does the gun violence in a city that gets 18 million visitors per year rarely get a mention in nation-wide newscasts, while teenage shooters in small towns across the country gain instant-celebrity status after committing their crime? This tormically* demonstrates the media’s hand in shaping public perception of what is newsworthy. The media is granted the unique power to decide what constitutes an American tragedy, and whether a death in any area of the country is tragic enough to warrant extensive media coverage.

In fact, on the morning of the Parkland shooting, a 40-year-old man was shot and killed in broad daylight at the intersection of St. Andrew and Magnolia Street in New Orleans. The week of the shooting saw “21 people hit by gunshots… and nine people killed by gunfire throughout the New Orleans metropolitan area” (1). However, the faces of those nine victims were not publicized nearly as much as the Parkland shooter himself. While thousands across the country could probably describe the face of the Parkland shooter, very few would know the names of the nine victims from that very same day.

There is some opposition to the idea of covering tragedies without providing details of the shooters — arguing that motivations that bring about school shootings are based more on the individuals themselves. While leaving out names of school shooters from news reports will not rid the nation of mass shootings, there is no doubt that it will diminish the amount of copycat incidents. In fact, this method has already been proven effective in diminishing teen suicides.

According to the article, “Recommendations for Reporting on Suicide,” “more than 50 research studies worldwide have found that certain types of news coverage can increase the likelihood of suicide in vulnerable individuals” (11). When Robin Williams died by suicide in 2014, suicides using the same method increased by 32% in the months after his death. Shortly after the media published graphic details and photos of Kate Spade’s suicide, Anthony Bourdain committed suicide with the same method two days later (9). Conversely, there is also proof that media representation can also have a positive effect. After the addition of the Vienna subway system in 1978, it became increasingly common to commit suicide on the subway and suicide rates sharply increased. As a result, media outlets began leaving out details about Vienna subway suicides, and the number of subway suicides “dropped more than 80 percent from the first to the second half of 1987” (5). We can conclude then that altering media coverage of traumatic incidents can decrease the potential for similar copy-cat events.

School shootings are sensational by nature, and thus will inevitably generate public interest and attention when they occur. The media must attempt to balance the need to cover the news with what is in the best interest of the public. By reporting the news in a responsible manner, the media can undoubtedly play a crucial role in reducing the likelihood of mass shootings in the future.

*Tormically- a way that is heavy and strange to understand. Difficult to process, frustrating.

This piece was completed for the class Alternative Journalism, which is taught at Tulane University by Kelley Crawford.

Footprints: The Tree of Life, nature as an equalizer
Art
We use cookies to ensure that we give you the best experience on our website. If you continue to use this site we will assume that you are happy with it.Ok