Editor’s Note: Right now, there is a lot of looking forward into the unknown, and we at ViaNolaVie also want to offer you some views from the rear-view mirror that will make you smile. The following series “Who Dat? Saints and Sports in NOLA” is a week-long series curated by Emily O’Connell as a part of the Digital Research Internship Program in partnership with ViaNolaVie. The DRI Program is a Newcomb Insitute technology initiative for undergraduate students combining technology skillsets, feminist leadership, and the digital humanities.

From the dismal seasons of the New Orleans “‘Aints” to rallying a hurricane-stricken community to a 2009 Super Bowl, the Saints have inspired a shared passion amongst New Orleanians that is unique to the city. Now that we’re in the doldrums of the NFL offseason, let’s reflect on how the Saints have influenced New Orleans culture, and as NOLA’s enthusiasm for sports continues to grow, we can look forward to a new era as the Pelicans look to make their own unique mark on the city. No matter what team you cheer for, New Orleans’ unique engagement with sports perfectly captures the fun-loving passionate spirit of the Big Easy. The Pelicans have the perfect opportunity to capture the same hometown pride that makes the Saints such a fixture of New Orleans culture. Especially as the future looks bright for the Pelicans, their energy captures the perseverance, vibrance, and passion of the Big Easy.

This article was originally published on February 24, 2017. 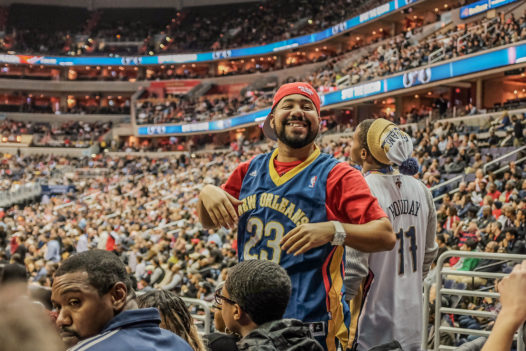 The motto for the New Orleans Pelicans in the 2016-17 season “It’s All About Representing NOLA.” To represent the Crescent City, you must first become a well-respected member of the community. The citizens of New Orleans put their time and money into supporting the Pelicans franchise, and all they expect in return is some form of entertainment to distract them from their everyday lives.

In today’s NBA, building a championship roster is all about collecting assets. The goal is to have a roster filled with young, talented players that compliment a couple of All-Stars. If you don’t have these components in place, then you’re in NBA purgatory as a team barely above the .500 mark with no chance of contending or securing a high lottery draft pick.

This is where the Pelicans currently reside, but they had their moments under the spotlight. The lack of winning hasn’t deterred the fans from attending games, as the Pelicans are still entertaining. The people of NOLA love their sports franchises, and take pride in rooting for “our team in our hometown.”

It’s All Business On The Basketball Court

The game of basketball frowns upon camaraderie among its players because moments under the basket can get a bit confrontational. The goal is to play hard, play fair and shake your opponent’s hand after the final buzzer.

The Pelicans have moved the needle forward by playing with a chip on their shoulder. Why? Well because Anthony Davis is the best player in the NBA under the age of 25 and receives little fanfare provided by the league. New Orleans is hosting the All-Star Game and Davis will represent the team and city as a Western Conference All-Star Starter. This has put the team in a foul mood, and the City of New Orleans loves how the Pelican players watch each other back on-and-off the court. It’s a mindset that best describes the spirit of the Crescent City to all.

Questions have emerged about how much of a priority are the Pelicans within the Benson Sports Empire. Team owner Tom Benson, who also owns the New Orleans Saints, has been criticized for paying more attention to the concerns of his NFL franchise, while completely ignoring the state of his basketball team.

The Deep South is where football reigns supreme, but the residents of New Orleans are very protective of allowing others define their rich sports history. Generating interest in a franchise is never an easy process. This challenge has gone smoothly in NOLA because traces of a basketball rebirth have been accomplished.

New Orleans is a Basketball Hotbed

Basketball fans in NOLA are very knowledgeable about the game, as it comes from their support of local college basketball programs. The transition to the pro game hasn’t changed the passion of the sport.

NOLA is a city that loves big stars, but more outwardly love is shown to their local sports stars. The amount of quality basketball players being produced locally is astounding, and it confirms a true passion for the sport. It’s not surprising since New Orleans vibrant culture continues to absorb new influences from other parts of the country.

Change the world this holiday season …
Reflections
We use cookies to ensure that we give you the best experience on our website. If you continue to use this site we will assume that you are happy with it.Ok