Measure for Measure and MeToo 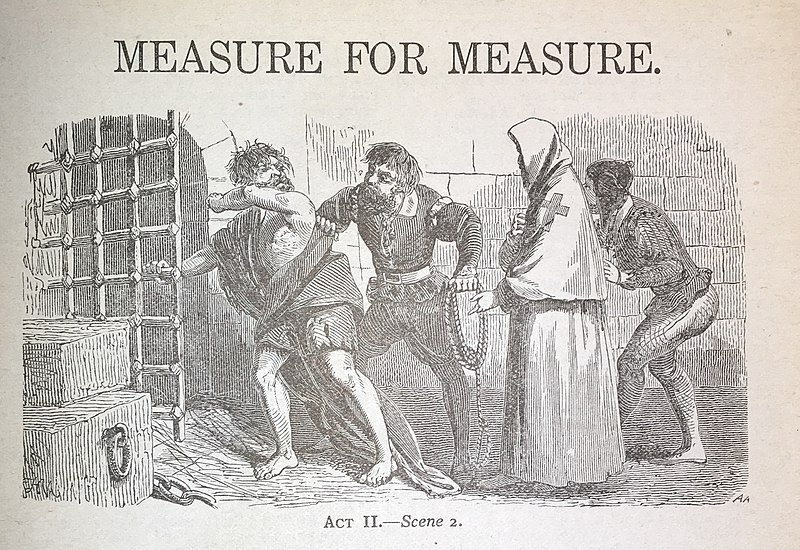 A lithograph image depicting a scene from Measure For Measure. (Photo: Wiki Commons)

In celebration of International Woman’s Day, this curation takes a moment to reflect on the powerful women and women-centered movements strengthening our New Orleans community. In this modern take on a classic Shakespearian work, Orissa Arend draws parallels between the MeToo movement to draw awareness to sexual assault against women in the workplace and the play Measure for Measure. This was originally published on September 20, 2019.

If Supreme Court Justice Bret Kavanaugh, the late billionaire sex offender Jeffrey Epstein, or the bully in the While House spoke in iambic pentameter, they would sound exactly like Lord Angelo in Shakespeare’s Measure for Measure. As Angelo tries to have his way with Isabella, I hear arrogant abuse of power and position, reckless indulgence of lust, high-handed hypocrisy, reliance on bribes and intimidation — familiar refrains in the MeToo discourse today.

In the play Angelo has been left in charge of Vienna by the Duke who hangs around disguised as a friar. He is trying to stamp out an epidemic of loose living, depravity, and debauchery plaguing the city. There are houses of prostitution and swaggering drunks everywhere you look. But who does Angelo decide to pick on? Poor Claudio who got his fiancé pregnant. The law, hardly ever enforced, was no sex before marriage. So to make an example that no one would miss, Angelo has Claudio arrested and plans to cut off his head.

Lucky for Claudio, he has this brilliant, principled sister, Isabella, who is a Catholic nun about to take her final vows. When she pleads with Angelo for Claudio’s life, it somehow turns Angelo on. He offers Claudio’s life in exchange for her virginity. Young Isabella is an equal to Angelo in debate, and she sticks to her guns, her virginity, that is. When she tells Claudio all this, he waffles, emotions all over the place, and finally decides, “Well maybe virginity isn’t really too much to give up so that I get to live” or words to that effect.

This infuriates Isabella who seems to be the only one in the story whose motives are pure. She is determined to expose Angelo, even if no one will believe her.

The Duke, watching all this from his disguise as a friar, then hatches an elaborate scheme designed to unmask everybody’s truth. When it works, he is hoping his savior status will win him Isabella as his bride. But she, the ultimate liberated woman. . . oops, never mind, go see the play.

The acting, with a diverse cast, is superb. Actors bring just the right balance of humor and gravity. Aditi Kapil, is a nationally produced female playwright of Bulgarian and Indian descent. She translated the play into a bit more contemporary English without changing the cadence (iambic pentameter), the dramatic pressure, or the rigor of language. This is part of a national movement, which began at the Oregon Shakespeare Festival. The Play on Shakespeare spun off from that with 36 playwrights, mostly women and mostly people of color, commissioned to create modern versions of the Bard’s plays.

You can see Measure for Measure, put on by the NOLA Project in the Great Hall of the New Orleans Museum of Art through September 29.

Shakespeare reminds us that the world has always been a place of corruption – often disguised as religious purity, hypocrisy and debauchery, and funny and serious. Here in New Orleans we have many creative ways of expressing and responding to debauchery. Especially of our street theater, Mardi Gras and Southern Decadence, I think Shakespeare would approve. But on the other issues, I’m not sure we have evolved. To hear our current MeToo dilemmas addressed so poetically and clearly by a liberated young woman in a story which has endured for 400 years, begs the question: What can we learn from Isabella about taking full charge of our own bodies, and having the courage to always tell the truth?

You’ve stolen my beat, Orissa! Love to see your byline in ViaNolaVie.