From clips to clicks: Boys and girls win skates in contest

Editor’s Note: No, this isn’t The Onion, and yes, you are looking at a real news story. Students in Kelley Crawford’s Alternative Journalism class at Tulane University dove into the archives of the Times-Picayune to find some shinning star articles. Everything from people having snakes in their bellies to a man becoming a human torch will be covered in the series, “From Clips to Clicks.” Each weekly post will display the original piece from the Times-Picayune (the “clips”), and then the written text will either be a modern adaptation or a commentary on the piece that’s published on ViaNolaVie (the “clicks”).

“Eleven Lads, Four Lassies Earn Prizes Given for Subscription.” No, we aren’t in Ireland; this is an article from the Times-Picayune in 1923, and boy is it a doozie (yes, I’ll be using dated language throughout this writing for fun and flare). But more than the language, let’s talk about the fact that kids entered a contest THROUGH THE NEWSPAPER. Can you imagine if we did this today? First off, anyone who would warrant the label “lad” or “lassie” wouldn’t be caught dead with a print publication in their hands, not when they have ipads, laptops, tablets, or phones to click, swipe, and be hypnotized by. And what would we give away now? Nothing as wholesome as a pair of skates (gee-wiz)! Oh, and, let’s throw in that the publication listed the NAMES and HOME ADDRESS of the children that won. Sure, they didn’t have to worry about cyber attacks in 1923, but what about legitimate attacks? Because, who knows what someone would do for a pair of skates in 1923. 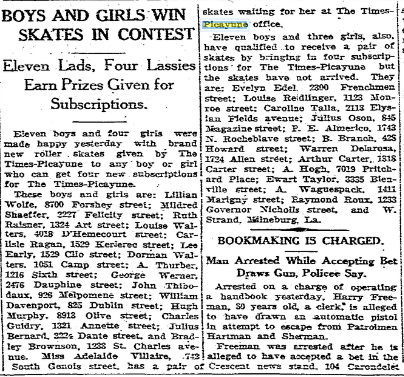 Mardi Gras: More than just beads and booze
Education
We use cookies to ensure that we give you the best experience on our website. If you continue to use this site we will assume that you are happy with it.Ok