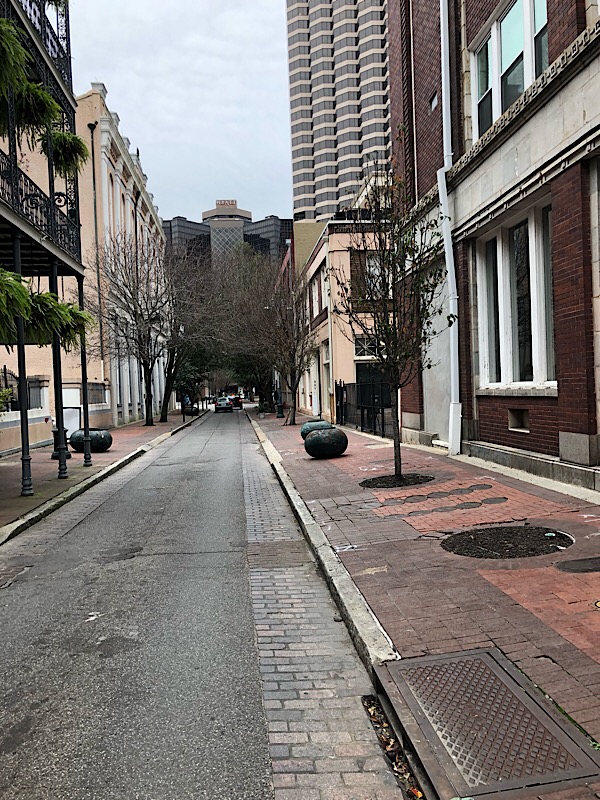 Paul Willis, Executive Director of the Tennessee Williams/New Orleans Literary Festival, is by far the most eclectic executive I have had the pleasure of meeting, but quite effective. He moves swiftly, barreling through the office with confidence, but with care. He is one of the team members of this particular organization, a tight knit group of people. He dresses in a mix of cargo shorts and a polo. This is his typical attire. He has no need of a suit. His work centers largely on keeping the lights on as well as networking, as needed.

Tracy, Managing Director, could not be more different.

If there is anything to note it is that they function as point and counterpoint; Tracy the fierce, doting mother; Paul the sharp, forceful, but fair father. They function as two support beams that hold up the entire organization. The two get along swimmingly though they could not be more different. This is a place for oddballs, and the result of their efforts is no different.

In  March of 2019 flocks of people  gathered all over New Orleans to celebrate the work of Tennessee Williams (and they’ll do it again in 2020), which is all well and good, but there remains another festival in town. Saints and Sinners is a festival that runs concurrently, which celebrates the LGBTQ literary community. The festival boasts speakers, such as Dorothy Allen, a finalist for the National Book Award, one of many talented individuals coming to New Orleans to celebrate LGBTQ works of art and culture.

“We started off with a weekend literary festival, and over 16 years it’s grown into a year-round community of shared ideals and encouragement,” said executive director Paul Willis. “As one of our longtime participants told me, ‘Saints and Sinners is a place where writers are reminded why we do what we do in the first place. It reminds us of why we write and why our voices matter in the world.’”

The festival runs four days and started as a cooperative with NO/AIDS Task Force in 2003. The festival offers readings such as “Sex and the Law: Hands Up and Off”; “Queer Literary Hook-Ups: Gauging the Impact” among a few others. The festival will center around the weekend closest to Williams’ Birthday, which is that of March 29-31. A weekend pass will cost $150 (in 2019) and includes the reception “Glitter with the Literati” on the 29th at the historic Beauregard-Keyes House & Gardens. The pass also includes the Tenth Annual SAS Short Fiction Contest Book Launch Party in the Hotel Monteleone’s Vieux Carre Room.

“Every year we have a diverse and talented group of LGBTQ authors arriving in New Orleans for the Festival. One of my goals is to make sure as many students as possible have the opportunity to read and learn from LGBTQ authors, to meet them in person, and to know there is a community of writers who have had experiences similar to theirs. We offer big discounts on student registration and also provide scholarship passes to students so more can experience Saints and Sinners,” Paul said. The festival is host to a broad spectrum of talent that celebrates LGBTQ identity. Authors of note coming this year are Tena Clark, and Bryan Washington as well as the aforementioned Dorothy Allen.

This is a festival for the odd, run by the eclectic. Paul spoke to the effect that it is difficult to keep a festival like this up and running specifically because, though they are a non-profit, it is not an easy sales pitch for an art festival. They do not provide something that is as concrete as other organizations, but they offer a safe place to celebrate artists and luminaries: the Williams’ of today. They provide culture and a safe place to talk and remember their work.

Krewe: Shellfish on the rocks, a look at oyster houses
Food