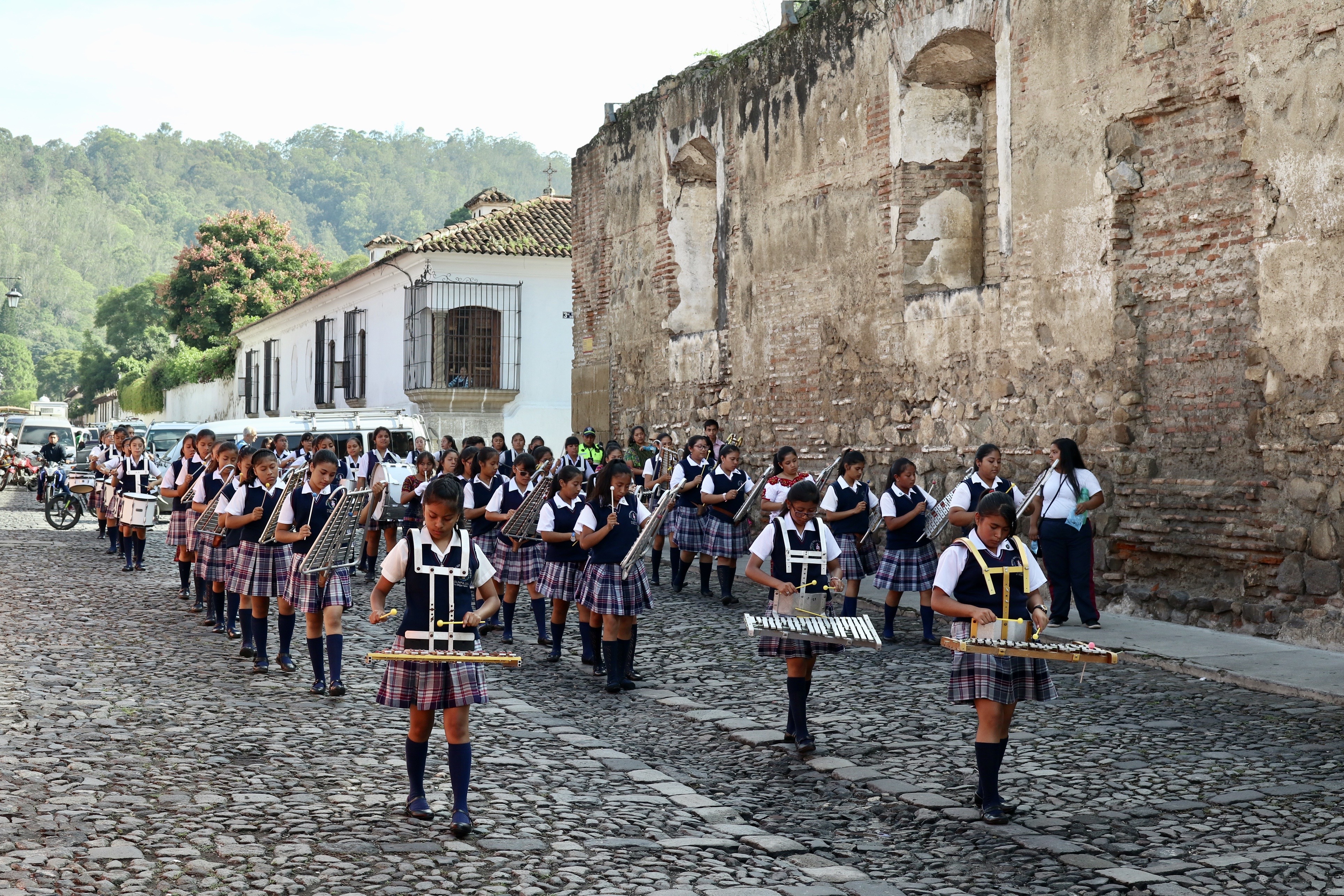 School children marching in the street. (Photo by: Folwell Dunbar)

Eddie and Wendell visited Antigua, Guatemala* in 1978. They liked it so much, they decided to come back the following year, study Spanish, and possibly even live there. “From the moment we got off the bus, we recognized it as a special place,” said Wendell. “Antigua has a feeling of quiet and subtle history, a sense of living in earlier times. Change and time move slowly here, at least that was the feeling in 79.”

“So what happened?” I asked.

“We ran out of money,” exclaimed Eddie, throwing up his hands.

“But, we did vow to retire there some day,” added Wendell with a smile.

Eddie and Wendell moved back to the states and ran an antique shop on Magazine Street in New Orleans. Thirty years later, they finally decided to retire. They liquidated the shop, and, true to their word, set off for Guatemala. They rented a place on the outskirts of Antigua. It has a lush New Orleans-like patio, several adopted cats, and a spectacular rooftop view of the volcanoes.

“If I could do it all over again,” said Eddie, “I wouldn’t change a thing.” 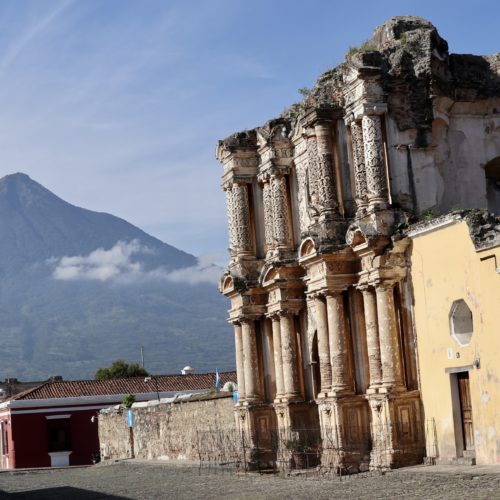 Agua from the hotel, El Convento. (Photo by: Folwell Dunbar) 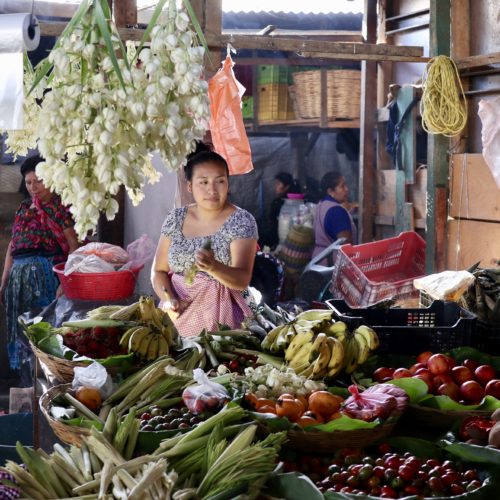 Shopping at the market in Antigua. (Photo by: Folwell Dunbar) 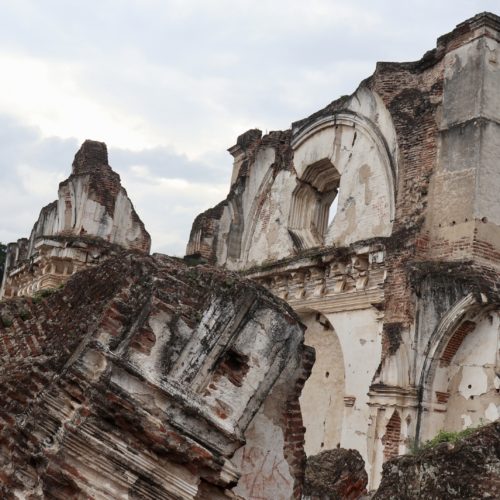 Ruins of La Recoleccion in Antigua. (Photo by: Folwell Dunbar)

Founded in 1543, Antigua was, for a time, the capital of Spanish Central America. For more than 200 years, the city thrived. Magnificent stone churches, government buildings, universities, mansions, monasteries and convents were erected. Santiago de los Caballeros, as it was known then, was considered one of the most beautiful cities in all of Latin America.

Then, in 1773, the city was leveled by a massive earthquake. Two years later, the Spanish government moved the capital to present day Guatemala City, and ordered its residents to abandon the Ciudad Antigua, or old city.

Like San Francisco in 1906 or New Orleans in 2005, diehard fans refused to leave. Instead, they simply lived among the ruins. Convents and monasteries were repurposed as stables, prisons, markets and factories, and mansions were carved up into smaller apartments. The city somehow retained a pulse, albeit faint.

Eddie and Wendell volunteer at Brillo de Sol, a school for children with special needs in the small town of San Gaspar Vivar. There, we met Anna Maria. Anna runs a small NGO called Uno Más. She recruits sponsors in Guatemala and overseas to pay for the children’s tuition. 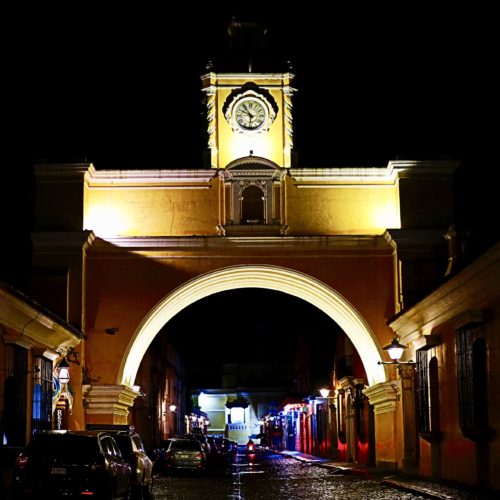 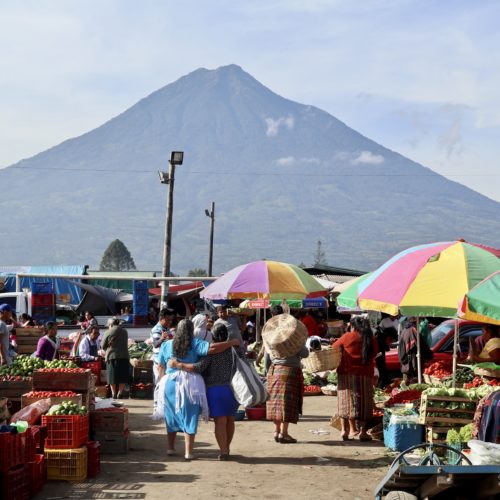 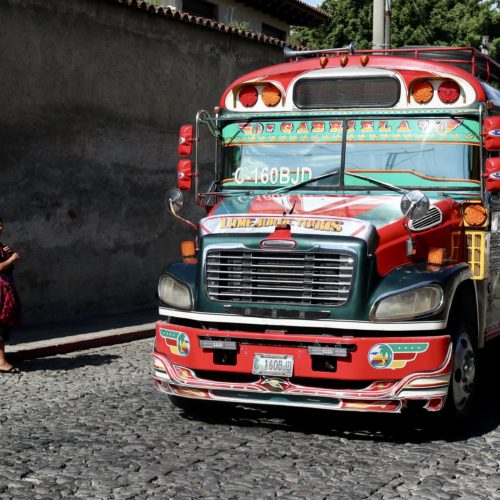 A woman waiting for the bus in Antigua. (Photo by: Folwell Dunbar)

Anna is originally from the Netherlands. When I asked her why she had left, she said, “I got tired of hearing the clippety-clop of tiny luggage tires on the cobblestone streets of Amsterdam. It’s overrun with tourists. Locals like me can’t afford to live there anymore. And, the climate is awful. Here, I bought my house with cash, and I eat outside almost every night. I have an affordable room with an incredible view.”

That view includes three volcanoes. Fuego or Fire, true to its name, coughs up lava and smoke whenever it gets angry. Acatenango sits quietly next-door. It hasn’t lost its temper since the 1970’s. Agua or Water is the closest to town. It looks like it was put there by La Oficina de Turismo to sell postcards. Many believe that they were actually the inspiration for Asteroid B-612, the home of The Little Prince. Antoine de Saint-Exupéry crashed a plane in Guatemala in 1938 and convalesced in the picturesque colonial city.

Speaking of classic books and geography, Under the Volcano by Malcolm Lowry was set in Quauhnahuac, Mexico, better known as Cuernavaca. Because of its perfect climate, it is often referred to as “The City of Eternal Spring.” Antigua, with its warm days and cool nights, shares that same moniker. 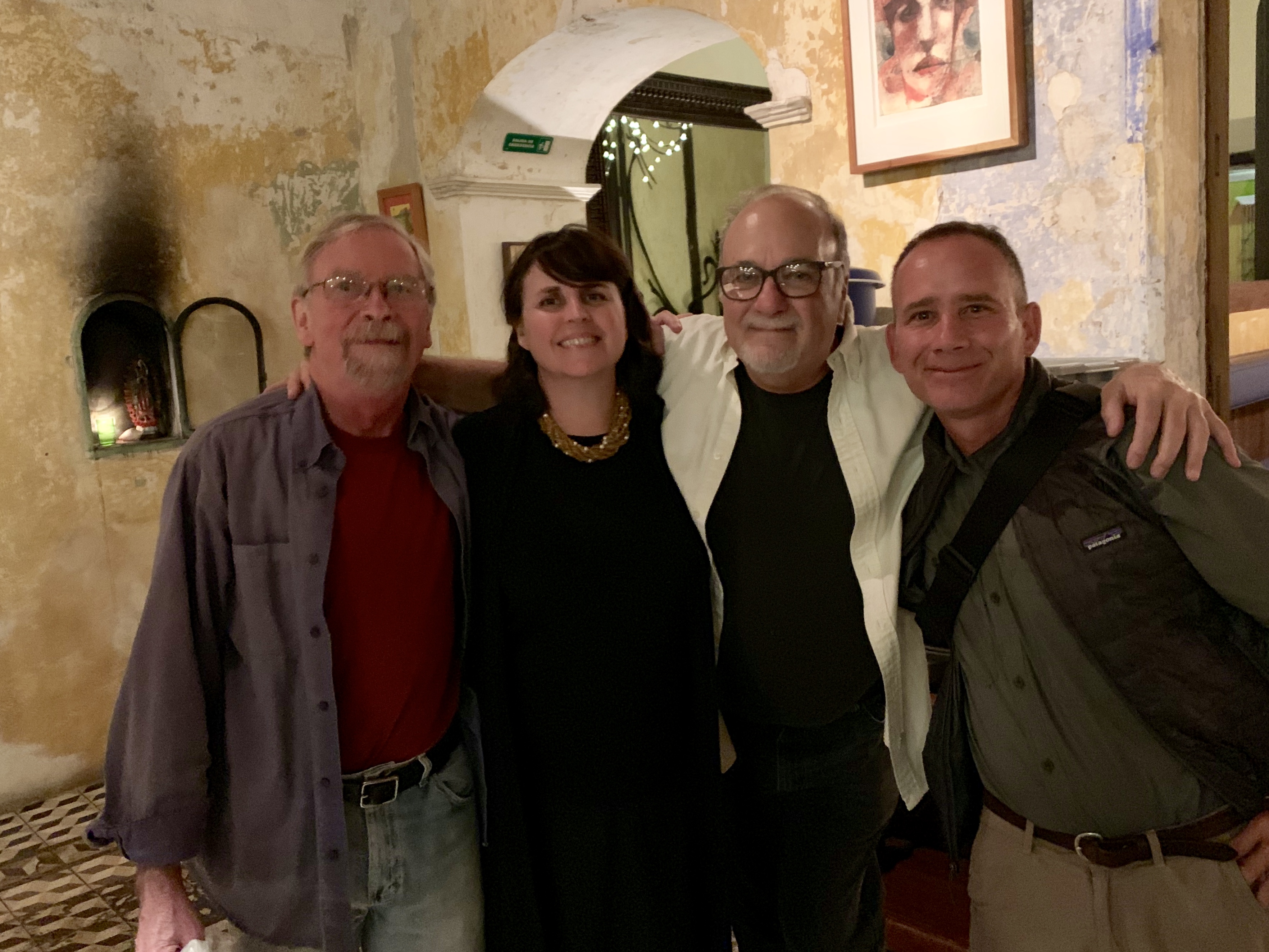 The author and his wife with Eddie and Wendell at Fermento. (Photo by: Folwell Dunbar)

I passed through Antigua for the first time in 1992. It was during the country’s brutal 10-year civil war. Needless to say, it wasn’t exactly a tourist Mecca. “It’s like a colonial version of Tikal,” I told my travel companion, Zack Lemann. “It’s like a less “gringofied” version of San Miguel de Allende in Mexico. It’s a %$#@ time capsule! I guarantee ya it’s gonna take off some day.” 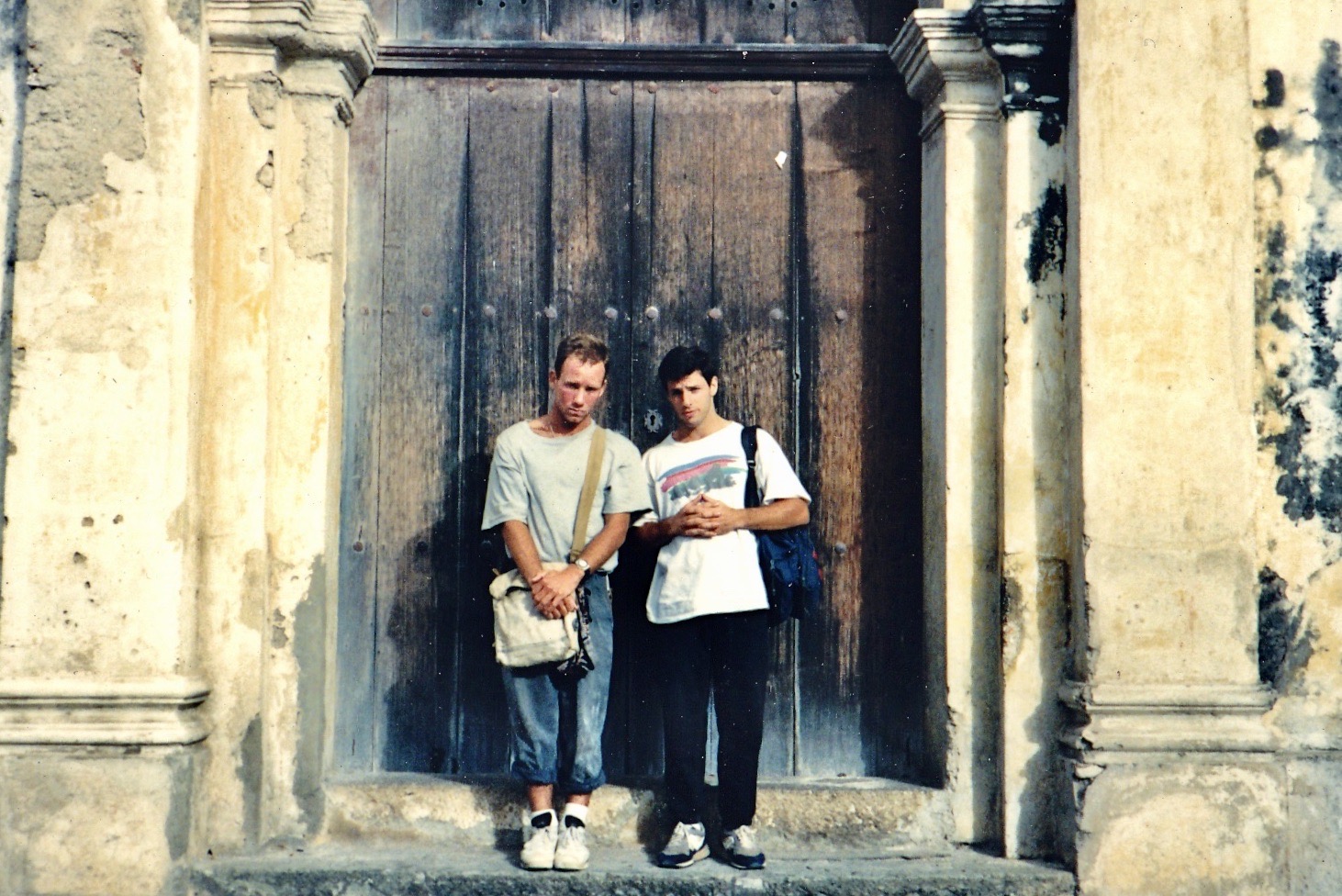 The author with his friend Zack in Antigua in 1992. (Photo by: Folwell Dunbar)

In 2011, my wife and I went down to visit Eddie and Wendell for the first time. You could tell the town was on the cusp of being discovered. Old dilapidated buildings were being fixed up. Convents and monasteries were now boutique hotels and beautiful museums. A French expat had a store that sold gourmet goods from Paris, Lyon and Marseille; former president Clinton had recently come to town for a summit; and there were several language and cooking schools. We visited Santo Domingo del Cerro Cultural Park, a free museum celebrating the work of Efraín Recinos, better known as the Guatemalan Picasso; and we had a hamburguesa at a McDonald’s that could have easily been on a historic home tour. 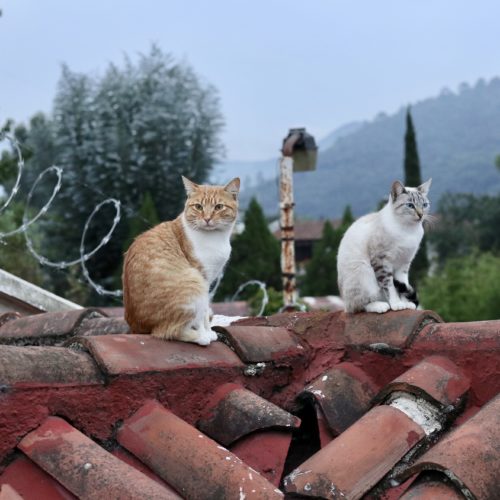 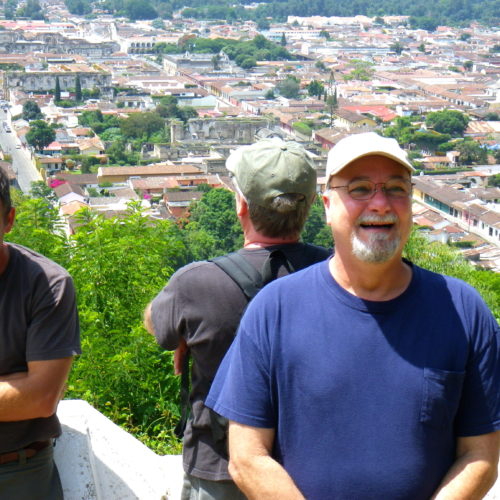 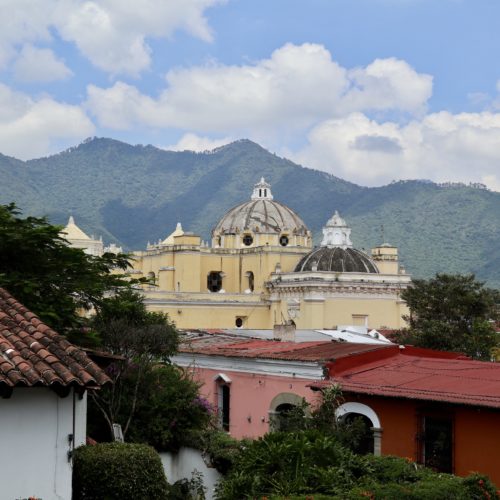 This year’s trip confirmed my 1992 prediction. The town was humming with activity. There were trendy, farm-to-table restaurants, yoga studios, and microbreweries, a Montessori school for earthy expats and a socially conscientious hotel. Francis Ford Coppola was fixing up a property, cafés and shops were selling fair-trade coffee and chocolate, and guides were promoting Costa Rica-like eco excursions. (Ziplining off the volcanoes is increasingly popular.) It even has a burgeoning dental tourism industry. (My wife and I got cleanings from a US-trained doctor for less than $20.) It’s not surprising that Travel & Leisure recently named it the “2nd best city in all of South and Central America.”

“It reminds me of post-Katrina New Orleans today,” I told my wife.

“It just took them a few hundred years longer to recover,” she said.

“I hope it doesn’t become a victim of its own success,” I told Eddie and Wendell.

“Nosotros tampoco,” said Eddie, “Us either.”

* Whenever I tell people that Antigua is one of my favorite cities, they always respond, “You mean island.” With its growing popularity, that may change...

Folwell Dunbar is an educator and writer from New Orleans, a city a lot like Antigua: old but new. He can be reached at fldunbar@icloud.com

Navigating the big muddy at the end of the world
Environment

How about creating schools with more purpose than test scores and letter grades?
Education
We use cookies to ensure that we give you the best experience on our website. If you continue to use this site we will assume that you are happy with it.Ok