Editor’s Note: To get you in the holiday spirit, we will be running holiday articles up until the big days! There’s a lot of lead-up to the big day of Christmas, and it often leaves people exhausted. Bettye Anding digs into these holiday traditions that make us more exhausted than enchanted. This piece was originally published on NolaVie on December 21, 2011. 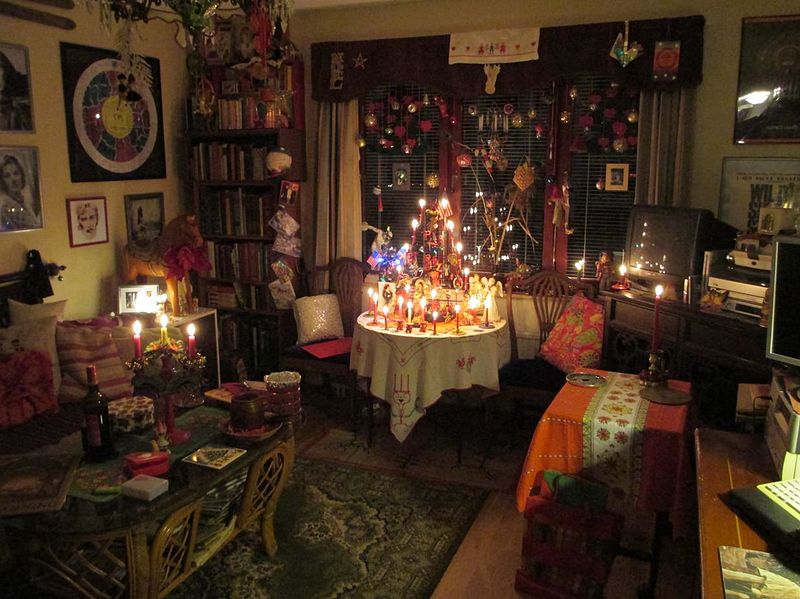 Keeping up with Christmas can be a full-time job. (Photo: Wiki Commons)

I read in one of the advice columns in today’s T-P that this 27-year-old whippersnapper who has lived with her fella for only about eight months has turned his mama’s Christmas Day tradition upside down by inviting 10 members of his family and 10 of hers to a holiday feast at “their” house.

The letter to the columnist was from the would-be hostess; no word from Mama, who wasn’t consulted and reportedly is unhappy with the proposed arrangement. Personally, I think it’s way too early for this little girl to be trying to reorganize Christmas for either family.

The whole situation got me to thinking about the years that my husband and I and our two children spent Christmas Eve at his daddy’s house in the Quarter and then got up early the next day and drove two hours to continue celebrating with my grandmother, parents, siblings and their infants and toddlers.

Family situations can be minefields in some homes, if you let them. Back in the day they weren’t, because nobody but Hollywood folks ever got divorced. Are you old enough to remember that?

Among those at my paternal grandmother’s big Christmas gatherings (she had nine children; I had 16 or so first cousins) on her farm back in the ‘40s, nobody had an ex-wife or ex-husband, so there were no “blended” sub-family groups and it was easier to figure out who was who than it is today.

There was my grandmother (my grandfather died before I was born), my three aunts and five uncles and their husbands and wives; and the cousins, some of whom were 10 or 12 years older than I and whom I admired greatly.

Only three of us Tucker sub-families lived in the same tiny town, so it was a treat to see the ones from as far away as, say, Dallas. Those young enough for me to play with were Joe Bob, his twin sisters June and Ann, and Mary and Billy, who were just younger than I. The year that Joe Bob fell into the pigs’ trough was a BIG one, but we mostly hung out in the large barn where there was always a parked wagon providing a step-up to the enticing opening to the hayloft.

We arrived about 10 o’clock, had the turkey and fixings about one — I had to sit at the children’s table! — and then the grownups went to the living room to sit around the fireplace and mostly talk politics. About 5 or 6 o’clock on Christmas afternoon the kerosene lamps were lit and we all gathered around the dining room table to watch the eggnog being made of cream and eggs and sugar and whiskey in a big dishpan. It was pale brown and thick as frozen yoghurt and we kids got our share — about three heaping tablespoons in cups.

Today, gumbo is the traditional fare at our Christmas Eve supper for about 18 to 20 family members, and you’ll need a chart to navigate the group, which has been a blend from way back.

Are you following me? Now, everyone in the second and third generation has half brothers and one half sister and half cousins. And my stepdaughter-in-in-law has two stepsons and a step grand daughter, who is my step great-grand daughter.

I’m not going to put you through much more of this, except to say that our daughter has remarried and now has a stepson and a stepdaughter. All of these folks, in addition to our new son-in-law’s mother and father, will be at our house on Christmas Eve and now do you see why you need a map? Also present will be our ex-son-in-law, who is welcome to bring his small son and daughter, who are half brother and sister to our two mutual grandsons.

I need to tell you, too, that when we’re together we don’t regard one another as “halfs” and “steps” at all; my husband is Grandpa and I’m Grandma Bettye, just titular heads of a big family that was put together in a way that’s still strange to some, but in these days not at all unusual to most people.

On Christmas Day, our folks will dine with in-laws and the other sides of their families, just as we did; my husband and I will continue the celebration with our daughter and her immediate family. It’s a good arrangement. If a questionably prospective in-law wants to mess with it down the road — why, we’ll have to talk. The time is coming, though, when the cooking and cleaning may have to pass into younger hands; but not this week.

Bettye Anding is a former editor of The Times Picayune Living section, for which she wrote Silver Threads until her retirement. Email her at btanding@cox.net.