Editor’s Note: For our “Perspectives” series, which talks with New Orleans-based journalists, pod-casters, documentarians, and photojournalists about their place and role in the journalistic world, Kelley Crawford was interviewed by Chloe Shuster. Chloe and Crawford discussed Crawford’s work as a journalist and how life adventures are  at the Times-Picayune and how that led her to co-creating the arts and culture publication, NolaVie. 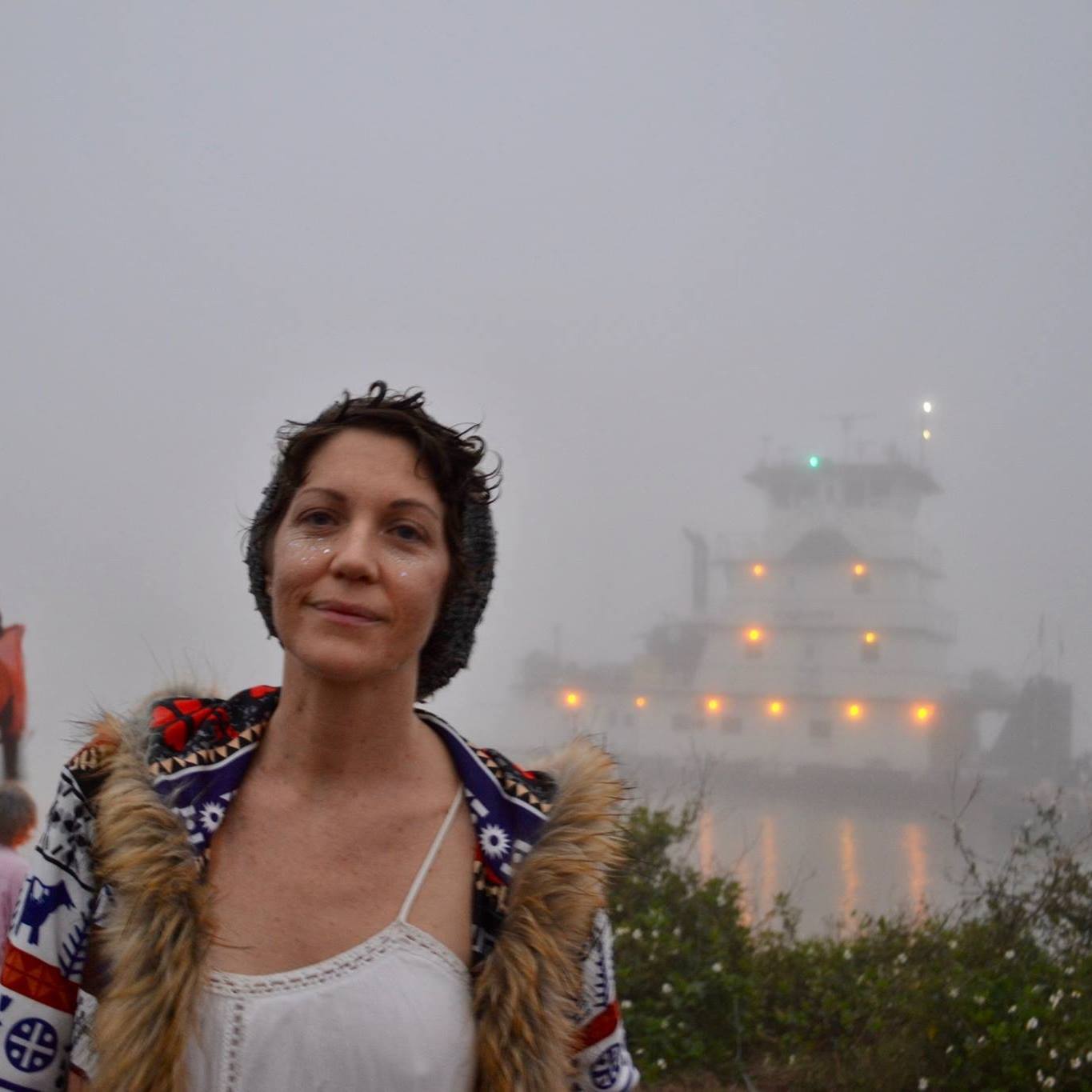 What: Writer and one of the founders of ViaNolaVie, where she is the managing editor

A Quotable Quote: “I’m interested in entities that have not been named yet; if we don’t have language to describe something, then it’s a true schism from what we understand and know.”

Q: What first sparked your interest in journalism?

KC: I never pursued or tried to get into journalism. I’ve always been a writer, but in regard to professions, I was an English teacher in Chicago. Then I turned vagabond for quite a few years, and when I moved to New Orleans in 2011 I was tutoring and mentoring students. Wow, this is so weird to say, but I got into journalism after a break up. The relationship required a lot of my time and attention, so when that ended, I took that opportunity to sift through and elevate certain priorities in my life. Art, education, conversation, socialization, and true connection had always been values in my life, so I wanted those to align with my everyday work.

I had heard about Nola Vie, so I thought up an idea for a column that would incorporate all of those values I wanted to nurture in life. I went to a meeting, I pitched the column, they accepted, and I started talking with artists. Six months later they put me on staff and then after a year they asked if I wanted to be the managing editor.

I like to do a lot of different things, and journalism is a profession where you can tap into all your different passions. You get to research, use your intellect and knowledge, and apply them to new situations. It’s wonderful to put new lenses on how you analyze a situation or how you report on it. It never gets boring…well, if you’re writing for the right organization.

Q: Do you have a favorite piece of your own? If so, why?

KC: All of the artists’ interviews I’ve done are really really special in different ways because you end up connecting with the artist in a way you’d never imagine. There was one — a mother/son interview I did around Mother’s Day a few years ago. Both of these people were so incredibly beautiful, and we hung out at a bar with the mom, the son, and the whole family that night, and then the mom and I became friends.

She passed away not long after, and I feel so lucky to have gotten to know her and be part of her life while she was alive. I’m not sure how I would have met her if I didn’t do this job, and that’s why with every interview I do and every time a person shares their ideas, passions, and dreams with me, I carry it around with me in life. I don’t know if the people I interview realize, or maybe they do, the impact they have on me, but for a soft heart like mine, it gets imprinted on regularly, and I love it.

Q: What quality or characteristic is most important in determining who is a good journalist? Is it good writing skills, passion about a specific subject, being perceptive, etc?

KC: One of my main missions within journalism is to break down this hierarchy of what makes something ‘good.’ Journalism has a lot of traditional standards that ostracize and marginalize a lot of people, and those standards block people from being part of the profession.

When I got involved with journalism, especially the editing aspect, I thought about this idea of how do we ‘allow’ people to express their voices or their ideas. What gets published? What doesn’t get published?  I am a very strong believer in first-person experience because that cuts down, hopefully, on appropriating experiences, perspectives, and narratives.

This element of ‘authenticity’ often arises when discussing whether a piece is ‘good’ or not, and I find that ‘authenticity’ is often defined by answering one question: Who is in control of the narrative? When a journalist writes a piece where is their voice? Are they speaking for someone else, and if they are, what are the implications of that?  Or, are they helping build — not give or manage — a platform for people to speak for themselves? I lean toward wanting to have all the voices authentically stated and embraced, and even though that’s a difficult endeavor…well, let’s just say I like a challenge.

Q: Do you strive to have an impact on society through your writing?

KC: Yes. I absolutely do. I don’t go into interviews or stories with agendas, but I definitely have a mission. I want to push back against anything that marginalizes people — anything that tries to negatively put people on the outskirts or tells people that they aren’t smart or they don’t know what they’re doing, etc. I’m big into radical acceptance.

I’d love to see us change our perspective on how we listen rather than trying to change the way someone speaks.

I also feel like education has a giant impact on life, so the educational outreach we made through transitioning NolaVie to ViaNolaVie — where we merged NolaVie and Tulane together — was incredibly important to me. I constantly see students doing amazing work that is on par, if not better, than what is being presented in mainstream media.

But students are often overlooked because, well, they’re students. So, of course,  I wanted to push back against that idea. Students do so much research — sometimes way more than a professional journalist — and so many students have these objectively cutting angles on what is happening and why. There’s a rebellious spirit in students that I love to see cultivated. By allowing that teenage spirit to live and move throughout the world, people can see that there’s an alternative to what society says you have to do or be.

So yes, that was a long answer to say that I want my work to have an impact.

Q: What are the themes that tend to draw you into a story? What do you make of these topics’ relations to your own experiences?

KC: I’m definitely a sucker for the alternative, in case you haven’t noticed. I want to investigate what others take no interest in because I feel like I can find beauty in almost everything, especially the act of being human. With that, I’m often drawn to the everyday that people often either overlook or don’t hold in high esteem.

There was this short documentary a friend of mine made — I was in high school at the time, and he was in college. It was called Scars, and he went around asking people to show him their scars, and he was filming the interactions. Every time a person showed a scar, they told a story — either with their words or with their non-verbals. I was really impacted by that. I loved this concept of asking about something that society takes no interest in and how that can open up a story and a shared moment with a complete stranger. I think I’ve always carried that around in my back pocket, metaphorically speaking.

Q: When following your subjects, how do you take notes? Are there ways journalists can be too invasive when gathering information?

KC: With my ‘Artists In Their Own Words’ column, I decided that I wanted minimal editing, so I record all of the interviews.

At first I was recording on a microcassette, which I loved. The problem became that some of these interviews were lasting for hours. One artist’s house I went to we ended up talking for over two and a half hours. By the end of it, he was completely drunk, and I was completely out of tape. Well, obviously I can’t transcribe and print a two and a half conversation, so I had to readjust my equipment and tactics.

There are times that I have to cut out questions or chunks of  responses. I always send the interview to the artist before they are printed, which many traditional journalists have a problem with, but I’m sure you can guess how I feel about that. I have no problem with transparency. And if the artist doesn’t want to unveil a part of their soul to the larger public, I respect that. Someone said to me once, ‘Well, what if that ruins your story?’ I figure, if it ruins my story than I’m not a very good journalist or writer.

Q: How do you define “alternative,” and how do you see your work fitting (or not fitting) your definition?

There are these feelings we get that are indescribable, but they feel just as real as emotions that we name on a daily basis. I think those are the alternative. We live them before we understand them.

In regard to how my work fits into the alternative; well, I’d say that all the work I haven’t done yet — but I can feel living inside of me — is the alternative. It’s ideas and stories and writings that I don’t yet know how to articulate. I have no way to write what I feel when I wake up in the morning next to someone I love  or when I find myself standing in front of nature that defies my understanding of colors and shapes. I have no language for those experiences.

It’s the most intoxicating state of Eros to be in, so, in some ways — and as odd as this is for a writer to say — I hope I can always remain wordless in life.

This interview was completed for the class Alternative Journalism. The interview has been edited and configured for publication.

[…] easily, and when loss happens, it cuts deep. This piece was written under the guidance of Professor Kelley Crawford at Tulane University for her Alternative Journalism […]

Back to school stress busters: Meditation as a lifesaver – Via Nola Vie
11:04

Looking great work dear, I really appreciated to you on this quality work. Nice post!! these tips may help me for future.Agt The Champions

Ethan Wilson
Recent Posts on ViaNolaVie
Donate to ViaNolaVie!     GIVE BACK TO THE NEW ORLEANS PUBLICATION THAT’S ALWAYS GIVING!  ViaNolaVie,...