Editor’s Note: For our “Perspectives” series, which talks with New Orleans-based journalists, pod-casters, documentarians, and photojournalists about their place and role in the journalistic world, Laine Kaplan-Levenson was interviewed by Zachary Goldstein. Laine Kaplan-Levenson is a well-known voice in the city of New Orleans. From creating TriPod and Sticky Wicket to hosting Bring Your Own and reporting for WWNO, LKL researches the past to investigate our present and future. In this interview, Goldstein and LKL talk about how they created their reporting style and where they think journalism is headed. 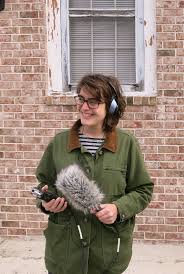 What – Producer for NPR’s Throughline, former reporter for WWNO, and creator of Tripod and Sticky Wicket

Let’s just jump right in. What are the themes that tend to draw you into a story? What do you make of these topics’ relations to your own experiences?

Most of the work that I do is history, and I love to find moments in the past that you can relate to what’s happening present day. So really connecting the past and the present to be able to say, ‘Hey, you know, what’s happening is unprecedented, right?’ we are hearing people say that all the time with politics and with Donald Trump. You know, it’s unprecedented. That really sparks, for me, a question, which I think is common for journalists: We’re always asking questions instead of you know, knowing things, or pretending to know things, and so my question was, ‘is it?’ is it actually unprecedented? Then I go back and find moments in history that draw parallels and say ‘Hey, some of this stuff it’s definitely crazy, but does that mean its never happened before? Probably not.’ And so I like to go back and find historical stories that help explain what’s going on in our present-day lives.

When following your subjects, how do you take notes? Are there ways journalists can be too invasive when gathering information?

Because I’m a radio producer, I can’t do interviews on the iPhone the way that we are, right? I have a recorder and headphones. I have a microphone that I hold in this grip and it’s sticking out. And so what I’ll do is, before I go and interview somebody, I’ll call them on the phone,  have a little conversation in advance, and I let them know that when I see them, I’m already gonna be recording. That way, you’re recording everything and so you get some of the nice moments of closing your car door or opening up the office or hearing the phone ring. You get that sound, which I will often use in my stories, to make the scene more alive. And also, there is no awkward moment of being like, ‘Hey, I’m just a normal person, and now I’m a radio producer.’ It’s just more seamless. This way I’m coming in and its going to get that person more accustom to the fact that there is a microphone there, and the sooner they see it, the sooner they forget it, and by the time you sit down for the interview, they’ve already forgotten that there’s this thing recording everything they’re saying.

Do you think that it can ever get too intrusive and if it does, how do you work around that?

I think being as upfront as possible [is a good approach]. The thing that I’ve learned is that you don’t want to surprise anyone. You don’t want to say, ‘Hey we’re just gonna talk,’ and then show up with a recorder. I’ve definitely become way more straight-forward, and I don’t assume that because someone knows I’m a radio producer, they know I’m going to be recording them.

I used to think, ‘Obviously they know that,’ and then there were a couple of times where I would pull out my gear before I started walking into the situation already recording and people would be like, ‘whoa whoa whoa.’ Well how’d you think this was gonna go? Again, it’s that classic rule of, don’t assume. I tell everyone because this is radio, I’m gonna have this microphone, it’s gonna be on by the time I ring your doorbell. That way you’re giving someone the opportunity to say no before they feel intruded upon.

How do you define “alternative,” and how do you see your work kinda fitting or not fitting your definition?

Alternative is a broad word. I think in a very basic definition, something that is alternative strays from mainstream norms. It’s kinda like the B-side, right? And I can relate to that word when it comes to for instance, to TriPod, which is the most recent project I’ve done here. TriPod broke away from traditional news reporting and the whole goal of TriPod was to look at the stories that were already being told about New Orleans, the mainstream catalog of New Orleans narratives that gets passed down through the tourism industry, city hall, entertainment. All those are already being done, so I don’t need to do those stories. I want to tell the ‘lesser known’ alternative stories. So I didn’t use that word because it was more about uncovering the unknown hidden stories as opposed to the alternative that sometimes can take on the quirky side. But I look at it as sidestepping mainstream narratives, and that was the main motivation for TriPod as a series.

Is that something you strive for in all of your work or is that particular to just TriPod?

I would say that that feels important to me, and I think one thing that helped me was that I did not take journalism classes in college. I didn’t study it, and in some ways, it ended up being a blessing. I mean it’s similar to what you’re doing. You’re studying political science, but you’re taking this Alternative Journalism course. There’s two sides to everything, but I have been grateful that I didn’t learn conventional journalism because that means I don’t have to unlearn conventional journalism.

What is unique about being a journalist in New Orleans, specifically?

It’s a small city, so people recognize your voice. If you’re on the radio, people recognize your voice when you’re out in public at the grocery store, for instance. So something that I love about working in a place like New Orleans is that the accountability to your audience is unavoidable because they’re gonna tell you what they thought of the last thing you did, while you’re like buying eggs, and that’s obviously something that would never happen in a city like New York, right? Accountability is everywhere, but here, it’s just so much more. You’re so apart of a small engaged community. You’re gonna engage with your listeners more directly than in a larger market.

What is the biggest challenge of being, primarily, an audio journalist?

Well, one thing I’ll say is it’s all about time. Podcasting is a little different, but for broadcasting, things fit into very specific clocks. You don’t have the Internet with an unlimited word count where if I wanted to write this thing, [makes typing motion] I could finish and post. The editing is so intense and crucial because your page count is actually minutes. I know a page of my script is roughly two minutes long, and if I need to do something that’s, you know, four and a half minutes, I know it can only be a little over two pages. So tightness of the editing for the broadcast segments that we have is not a flexible thing. That is something that makes you a really good writer because you have to shorten your words and make things super basic and understandable. You have to get the point across, and you can’t waste any time.

A very relevant question to Sticky Wicket. I think both. I don’t think it’s one or the other. They both heavily influence each other. Politics shapes journalism in that politics is unavoidable. You can’t not cover it. For instance, with Donald Trump as we’re seeing, and with this episode that I did on Huey Long, a former Louisiana governor, there are a lot of similarities to the current president in terms of style. Trump does all these wild things to get the media’s attention, and the media can’t not cover it, even though that might be problematic.

There’s actual problems going on or things that [Trump] might not want people to pay attention to, and so he does a song and dance about the border, and we’re talking about it because he’s talking about it. So politics is guiding journalism in that way. Where if the president says it, ‘You gotta cover X topic, even though there are so many more important things to cover,’ that’s a problem.

At the same time, politicians know that journalists are there to monitor what’s going on and almost act as this fourth invisible branch. That’s why they clash all the time. Politicians are intimidated by the media because it’s making sure they’re not corrupt. Journalism is forcing politicians to be held accountable, and so we would hope that a free press in a democracy is impacting politics in keeping the people serving and doing their job. So I think it goes both ways. You see both of those things happening in full force today. That’s why Trump is talking about the media as the enemy of the people, because he knows that having The New York Times follow him around is a threat to him. Then at the same time, all the crazy shit he does is covered by The New York Times, and that takes away time and energy about talking about more important things.

I don’t think we’re witnessing the end of traditional journalism right now. Some of those traditional institutions are being more energetically supported than they were pre-2016. For instance, The Washington Post, and The New York Times, and NPR are all getting tons of support from the population, their readers, and their listeners. So right now, I don’t see those things crumbling because of a lack of interest on behalf of the American people.

I do see a growing distrust in that [kind of media]. Things like social media and alternative platforms like Medium, where there’s more of this citizen journalism going on, are becoming an extremely powerful force. But, it hasn’t, I don’t think, wiped out the traditional stuff. I mean even Fox News, I don’t believe is an unbiased thing. But Fox News viewers don’t think that NPR is an unbiased thing. That goes both ways, and it’s not the same thing, but, that’s still in some ways a traditional news platform, and they’re doing just fine right now. I don’t see those things crumbling.

But I do see the free press in a state of vulnerability that it wasn’t a few years ago because the president of the United States is attacking it directly. And I don’t think that’s a good thing.

This interview was completed for the class Alternative Journalism, a class at Tulane University taught by Kelley Crawford. The interview has been edited and configured for publication.

Perspectives: Writer and immersive journalist Lacar Musgrove
Extra/ordinary
We use cookies to ensure that we give you the best experience on our website. If you continue to use this site we will assume that you are happy with it.Ok