All Relations Brewery brings a new brew back to New Orleans 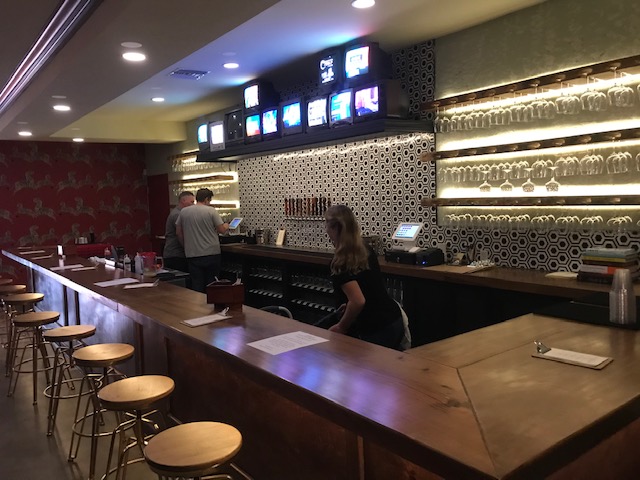 The bar at All Relation Brewing. (Photo by: Kevin Horne)

When the temperature drops and the holidays roll in, it’s hard not to get stoked about beer, well maybe a little more stoked than usual, anyway.  The newest cause for celebration is All Relation Brewing, which opened on November 23 at 1401 Baronne Street, across the street from the old Brown’s Dairy facility.  I first heard about All Relation from a couple of Courtyard Brewery’s guys when I was checking in there (and lucky enough to get a couple of pints of their English mild ale — a rare treat in these days of haze, hops, and sours).

The first time I went, I got there before the 3:00 PM opening time, but the giant garage door on the side was open, so I stuck my head in.  A young guy, looking very much the part of a 21st Century craft brewer, was doing something up on a platform, but he came down to see me, or maybe to throw me out.  Turns out that guy was Bobby Bendily, owner and head brewer of All Relation.

I told him I was a world famous beer journalist.

He didn’t buy it, but he asked me if I wanted a beer anyway.

I opted for a can of Mexican lager. As we chatted outside on a perfect fall day, a young lady drove up and asked if the place was open. When Bobby said, “not till three,” she said something that rhymes with “knit.”  But she cheered up when Bobby said she could buy something to carry away. She introduced herself as Emily and said she tends the taps at Parleaux Beer Lab.

Bobby took his two unexpected visitors into the tap room and offered us a sample of the pina colada Berlinerweiss.  (Not too sweet or too sour, with a nice pineapple note.) The All Relation tap room looks like a fancy cocktail lounge.  It’s big but still feels cozy, with lots of wood, and even booths. Out back, there’s a huge gravelly yard with picnic tables.  The bar boasts a dozen taps, but only eight were in service because Bobby and his business partner, Quinby Chunn, owner of Southern Prohibition Brewing, opened All Relation a little bit ahead of schedule.  In fact, one reason that their grand opening flew under many radars is that they didn’t want to be touting it before successfully dealing with the brewery bureaucracy, known for its ability to slow down the Earth’s rotation if not handled with due care.

There’s no kitchen, but they plan to build one after the first of the year.  In the meantime, they will feature pop-ups, now a standard feature in local breweries. 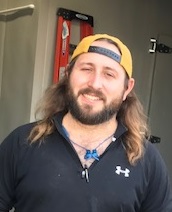 Bobby chose the name “All Relation” to acknowledge the “relatedness” of all things.  It was his way of saying that the brewery is not an insular endeavor, but a way of connecting to, well, everything.  Indeed, Bobby’s road to All Relation was a series of fortuitous connections.

He was born in Belle Chasse and lived in Plaquemines Parish until he went to Brother Martin High School in New Orleans for the 8th grade.  After school, he cooked and managed restaurants in New Orleans, including some time at Café Degas, where he met is future wife, Anna.

Before he ever brewed a drop of beer, Bobby read a ton about brewing.  At one point his roommate had heard enough of his beer talk, so the roomie gave Bobby a beer kit and told him to shut up and make some beer.  Home brewing became a hobby, but Bobby always figured his career would be in the culinary world.

When Anna got a teaching job in Brooklyn while finishing up her second master’s degree, Bobby went along.  He hooked up with a home brew shop, Bitter & Esters, where he figured he’d work until the right kitchen gig showed up.  Through the brew shop he made a lot of connections with the New York City beer world. The couple expected to move back south where Bobby would open a little restaurant in a historic building in Gulfport, Mississippi.  Bobby came down to set things up. 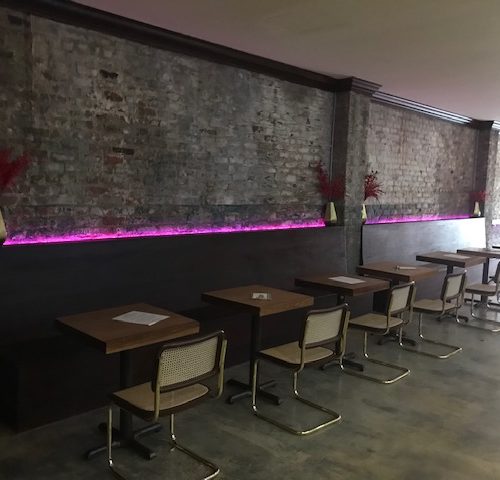 Wall tables at All Relation Brewing. (Photo by: Kevin Horne) 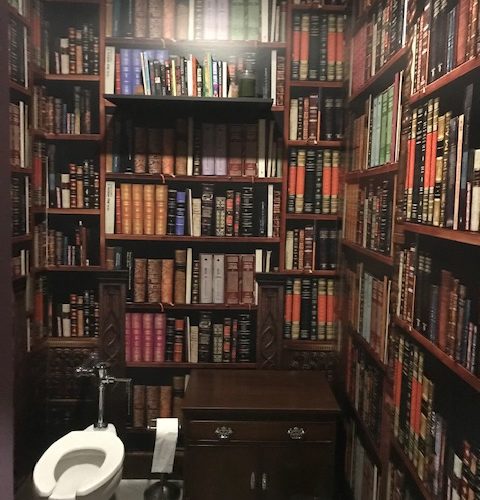 The very clever commode at All Relation. (Photo: Kevin Horne) 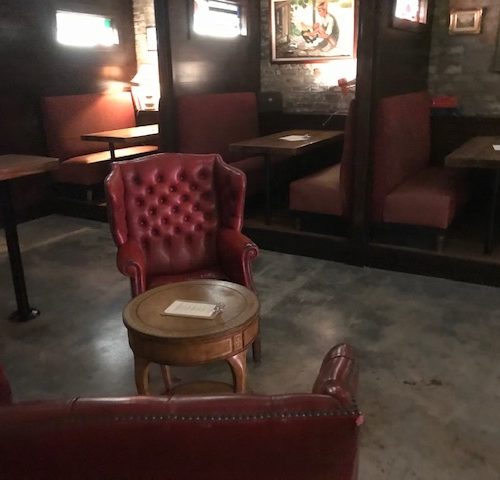 Places to curl up, drink some beer, and have a conversation. (Photo by: Kevin Horne)

Back in New York, Anna was finishing up her second master’s degree and expecting to head back down south, when she won the prestigious Truman Capote fellowship, which meant she’d be staying in New York a bit longer.  Cue the next connection – a lifeline from a friend Bobby had made via the homebrew shop. The friend knew about the couple’s situation and took Bobby on as a brewer at Other Half Brewing Company in Brooklyn.  Bobby moved up to become head brewer at Other Half, which is arguably New York City’s hottest, coolest brewery.

Bobby described being at Other Half as his “dream job.”  So why did he leave it to start on the ground floor with a new endeavor back in New Orleans?  The short story is that Quinby Chunn talked him into it. Bobby and Anna came back to New Orleans and got married at Paradigm Gardens, just blocks from the current brewery.

Brewing has risks of course, but as Bobby says, “This is not the first rodeo for any of us.”  The All Relation crew’s professional experience and competence are readily apparent from the posh, well-run tap-room, to the state-of-the art brewing gear, to the way they handled their opening.  They brew in a 10-barrel system, which to a person who can barely conceive of anything larger than one pint at a time, means only that it’s not big. All Relation could produce as much as 5,000 barrels a year, Bobby said, but they have no plans to go big.  Their capacity, he said, is just big enough to let them “get weird.” 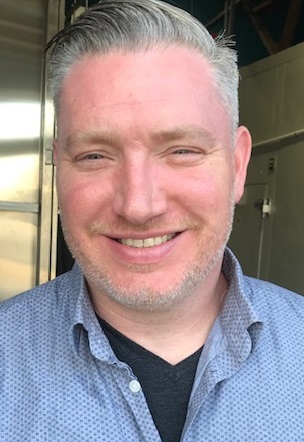 Shane Glackin of All Relation Brewing. (Photo by: Kevin Horne) 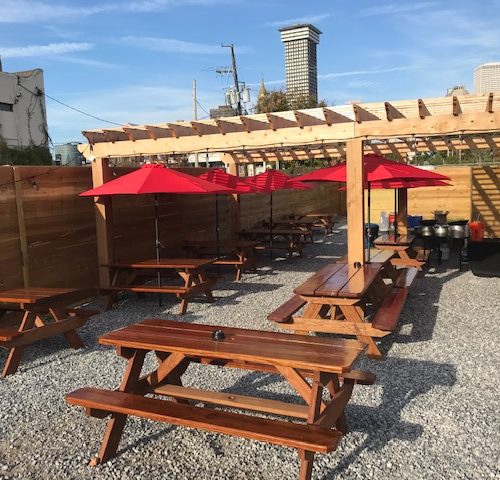 Patio of All Relation Brewing. (Photo by: Kevin Horne) 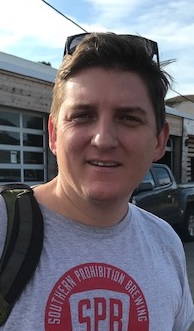 Quinby Chunn of All Relation Brewing. (Photo by: Kevin Horne)

Eventually, All Relation expects to have a dozen beers available all the time, with a turnover of three or four taps in a given week.  Expect many collaborations with other breweries. A week or so ago, the menu was predictably heavy on haze, with oats and lactose predominant ingredients.  There was also a sour IPA, a bossy 12% double dry hopped hazy IPA, and a sweet “Vending Machine Stout.” Anyone who has ever endured my beer rants knows that hazies and sours are not my thing and that every beer I love seems to go rapidly out of production, despite my best efforts to keep them alive with excessive and irresponsible consumption.

But Bobby offered me a glimmer of hope.

He said that the new tap room manager, Shane Glackin, a popular Irishman known to just about every local brewer, might persuade them to do an English ale… some day.  (Two words for Shane: “Tawny Twit.”) Meanwhile, the big happy crowds at the bar and on the patio testify that All Relation nails their styles, in an immensely popular way.

In case you missed it, the Gem Theatre,  former nest of Wayward Owl, is now home to the Zony Mash Beer Project.  Zony Mash is headed by Mitch Grittman, who won many prizes as a renowned home brewer before hitting the big time.  Nora McGunnigle writes wonderfully about Zony Mash right here.

Also, Cajun Fire Brewing has come to life, or maybe back to life.  The Cajun Fire story is about more than good beer.  Check out Black Table, Black Tent: Creating Equity in the Craft Beer Industry.

Winterfest, the big annual production of the Crescent City Homebrewers, is set for Saturday, December 7 at Deutsches Haus.  That’s pretty soon, so get a move on. Ticket information is here.  The local home brewers bring out their best stuff, and last year’s Winterfest showcased a wide array of styles.

The best way to keep up with the fluid New Orleans beer scene (pun regrettable but necessary) is to follow the beer on the WWW.  Here’s a list of New Orleans brewers, with links. Be sure to follow them on Facebook and Instagram, too. All Relation; Brieux Carré; Cajun Fire; Courtyard; Crescent City Brewhouse; Gordon Biersch; Miel; NOLA; Parleaux; Pidgin Town; Port Orleans; Royal; Second Line; and Urban South.  Oh yeah, Dixie’s back.  Tell me who I forgot.  Which one is my favorite?  That’s easy: It’s the one I’m at.