Artists in their own words: Thomas Cole

What: Author and photographer

What to know: He’ll be presenting on his book, Standing in the Shadows: New Orleans in Focus, at the Louisiana State Book Festival, which is Saturday, November 2 at 01 N 4th Street in Baton Rouge, LA.

KC: In your book, Standing in the Shadows: New Orleans in Focus, Andrew Hale comments on how you’re a flaneur, a wanderer of the city, which is interesting because you wander the city in order to capture and create still images.There’s a paradox that exists  there. How do you see the paradox of movement and stillness playing out in your photography?

TC: In order to see a city, I always wander. I feel it’s important to keep moving rather than wait for something to come my way. I’m an impatient sort, and I’m always wanting to seek, rather than to  hope that something comes and absorbs me. And that’s for every part of life; I’ve always wanted to be proactively seeking. I keep moving my feet and keeping my eyes and ears open as I go.

With my photography, I witness the movement that occurs before and after the photograph has been taken. I’m aware of what was going on, so, yes, absolutely I see stillness and movement, and I’ll sometimes relive those moments. Out of the photographs that are in the book, there are probably not more than 35 photos that have any people in them.

KC: What’s the most common text message that you send?

TC: You know, I have a simple flip phone. I don’t have a smartphone, so texting is not my style. I’m a product of the 20th century.

Mind you, I’ve built websites; I own an iPad, which when I’ve got a WiFi connection inside of a building somewhere I will check my email and send messages. But when I’m wandering out and about, I’m not accessible. I often don’t even tell people what my cell phone number is [laughing]; I don’t want incoming calls.

The cell phone is not an essential part of my life. And actually I love it.

TC: Well, the title of an ‘ideal image’ comes from a book that was put out, I believe it was in the 80s, as part of a collection of the LA County Museum of Asian art, and since my earliest appreciation of art in general was classical Asian art, which provoked me to travel to Asia for the first time, that’s where that phrase comes from.

In terms of the ‘ideal image’ and what I’m doing, God knows how many shots I’ve actually taken.

The number of shots that were taken in order to create this book was enormous. Yet, there’s some images that truly stand out from others.

An ‘ideal image,’ as opposed to just something that was a snapshot, has forethought.

KC: What street name in New Orleans do you love to pronounce?

TC: It’s a more common one, but I love to say ‘Esplanade.’ Although, there are so many great streets in New Orleans. There’s Mystery Street and Harmony Street. There are all these wild street names. And there are some I still don’t pronounce correctly. I’ve known people who’ve lived in the city for up to 20 years, and they still don’t have a handle on how to pronounce some of these names. 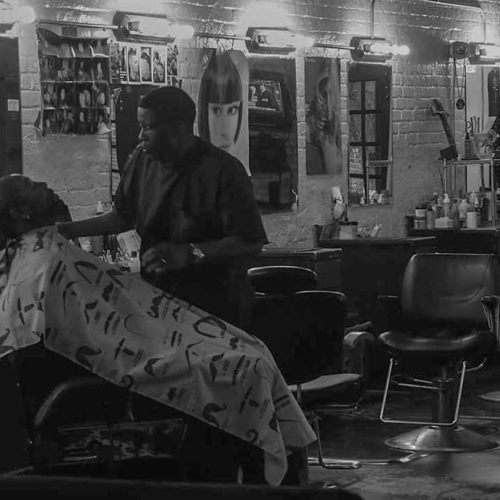 Finishing Touch, 7th Ward, 2015 Old school barbershops are plentiful in New Orleans. As in the past, they are often viewed as social centers with more people hanging around for conversation with their neighbors rather than waiting for a shave or hair cut. Taken at night, the busiest time is any Saturday morning. (Photo by: Thomas Cole) 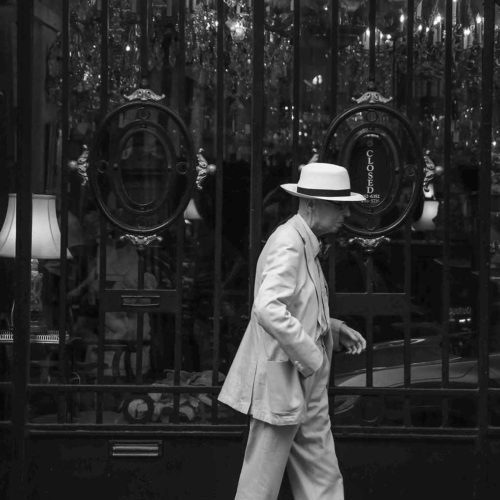 Closing Time, French Quarter, 2017 Upon locking the doors of a prestigious Royal St. antique store, the owner himself is not unlike a walking antique, attired in a traditional summer suit of white linen. (Photo by: Thomas Cole) 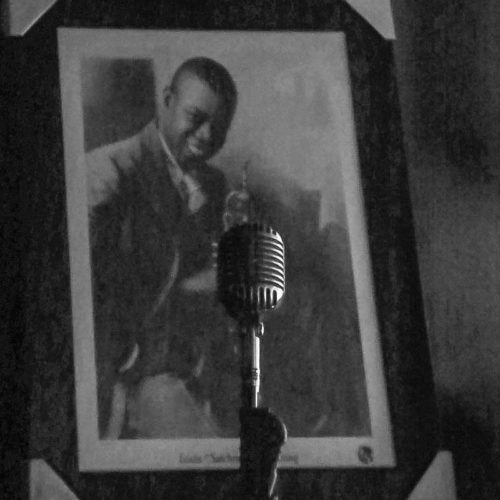 Louis Lives On, 7th Ward, 2018 Located in Kermit Ruffins’ bar, the Mother-In-Law Lounge in the 7th Ward. Ruffins himself is one of the more renowned trumpet players in the city, recording for the home grown Basin St. Records Company. Kermit has been known to devote time to a reprise of the great Louis Armstrong classics. (Photo by: Thomas Cole)

KC: If someone wanted to turn one of the images from Standing in the Shadows: New Orleans in Focus into either a film topic or a narrative, what image would you choose?

TC: The cover image is very fascinating to me, and that wasn’t a photograph that I lingered over. Sometimes when I see something I’ll linger over it, and I realize I’m witness to something absolutely extraordinary. For that image that’s on the cover,  I was walking down the street from my daughter’s place. I saw the image, took one shot, walked on, and never thought about it again. And it was only after I started to review the images that I realized that the photo captured something — there’s absolutely no people in that shot. The odd fact is that the shot was taken around 5:30 PM. The street should have been busy with rush-hour traffic of people driving, walking, or leaving work. But there’s nothing.

It’s almost a dystopian futuristic image in that there’s absolutely no people. It looks like the aftermath of some sort of chemical warfare there’s just stillness where these mannequins are standing.

So maybe that image could be the subject for some science fiction movie.

KC: What do you think the world would be like if there was no concept of ‘better.’ As in, what would the world be like if we didn’t have the comparative or superlative labels.

TC: It seems that a sense of differences, not through racism or stereotyping, between people is a natural concept. Without a concept of ‘better,’ though, our species might be able to cooperate with one another in a more congenial fashion.

When it comes to my own work and the concept of ‘better,’ I am my own harshest critic. It doesn’t matter if I’m looking at an image or at something I’ve written, I judge it seriously. Sometimes I’ll write something and think it’s brilliant, and the next day I’ll return to it and think it’s garbage.

I think we’re naturally inclined to to judge, but we should be more forgiving of ourselves. And of one another as well.

Thomas Cole will be at the Louisiana State Book Festival, which is Saturday, November 2 at 01 N 4th Street in Baton Rouge, LA. He will be presenting on his photographs and his experiences photographing for his book Standing in the Shadows: New Orleans in Focus. Cole’s photography will also be exhibited for PhotoNOLA 2019 citywide celebration of New Orleans photography from December 11-14 at the Jazz & Heritage Center (1205 N. Rampart) and the Children’s Library/Research Center (913 Napoleon Avenue).

Artist in their own words: Jared David Michael Grant
Artists