Footprints: The dangers of toxic masculinity for men, an analysis of “Heroic Man” by Gaston Lachaise

Heroism is a tale as old as the written word, according to Franco et al article Heroism Research: A Review of Theories, Methods, Challenges, and Trends. Ritchie Gibson of The Daily Telegraph explains that heroes are ordinary people with extraordinary actions. Gibson refers to his fellow soldiers from his days in the military, but also his friends and family who have selflessly supported him as examples of heroes. The people that Gibson choose as his hero can arguably be the type of person that most Americans choose to encapsulate heroism. A commonality between all examples of a hero is the tendency to define hero with actions, though Franco et al recognize that a consistent definition of hero is near impossible. In most contexts, someone must do something to be heroic, selfless, and world-changing. But what must they do?

The “Hero” in the New Orleans Museum of Art’s public sculpture garden stands. Reaching over eight feet tall and facing gallantly south, looking over the pond that winds through City Park in New Orleans, Louisiana,  The Heroic Man can be described as unmoving and powerful. His power stems from his size and his confident stance. The Heroic Man towers over everything around him with his back straight, chest out, and chin up; a position which some research suggests increases testosterone and other “risk-taking” hormones.  Waymarking.com calls the sculpture by Gaston Lachaise, “proud and triumphant, like a winning athlete or warrior.”

His hands are as big as his head, which is the size of a watermelon. The forearms seem to be made of two long, over-inflated balloons. He is nude. His muscles are cut, abdominals prominent. His legs are almost one and a half times the length of the rest of his body. The statue’s exaggerated limbs are reminiscent of are that uses mannerism to exaggerate limbs and proportions to suggest movement and heightened drama. Proportion is also important because we use ourselves as a reference point, and we tend to marvel at things that are significantly smaller or larger than ourselves. Spectators are expected to be in awe of The Heroic Man. We are to look at his strange proportions and sense the movement, be intimidated by his size.

According to Franco et al, this reverence is what, through history, has made a figure a hero.

Problematically, boys and men feel as though they need to be noticed and heroic based on defined gender roles. If a man is not awed at, if he is not seen, he cannot be the hero that he is expected to be. These expectations are noticed in Boys’ Perceptions of the Male Role: Understanding Gender Role Conflict in Adolescent Males, when boys reported that they felt “societal pressure to avoid emotional expression as well as the expression of affection to other men … [and] a need to succeed and show dominance in class, in groups, and in athletics” (2).

Throughout history, gender roles have affected how the population act. It varies from culture to culture but, overall, women’s roles based on their gender have changed substantially. Dating back to the Viking Age, it is believed that women in the Viking Age were seen as homemakers. In Viking Age burials, men were buried with swords and weapons; women were buried with household items, needlework and jewelry. Today though, women are beginning to see changes in their roles. In 2018, women represented 46.9% of the labor force.

The artist, Lachaise, spent the majority of his career creating art that depicted women; yet, he now has this sculpture of a man. Lachaise, then, is forming his idea of what makes a man with his statues that outline what makes a woman and his ideas of the genders align with classic gender identity roles. With the many figures of femininity that Lachaise has made such as Sitting Woman, Standing Woman, or Elevation (Standing Woman), female figures that have been named after what they were doing in that form. We know that Lachaise’s women are women because the title says so. We know that Lachaise’s Heroic Man is a man not only because of the title, but because of the physical aspects attributed to him. Obviously, Heroic Man’s penis is visible, the first indicator of his sex, and we can address the secondary sexual characteristics of the statue such as a lack of breasts. Spectator’s can also feel the masculinity of Heroic Man through his physical attributes.

Gender roles have been expressed through art since the beginning of art itself. Male gender representations are often seen by “notions of power and weakness, superiority and inferiority, benevolence and malevolence.” The use of The Heroic Man’s size, muscles, and stature together paint the gender roles that are placed upon men in today’s society because those exact characteristics are used to define the power and superiority of Heroic Man. 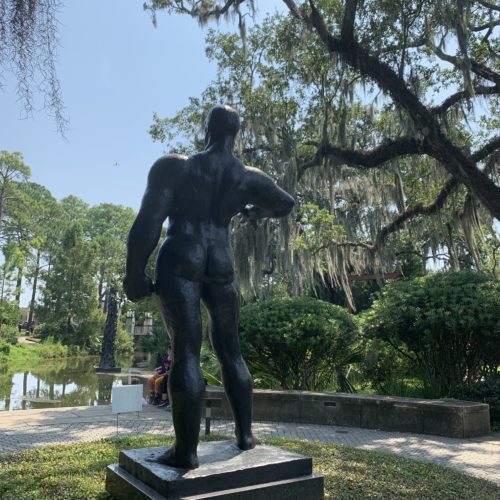 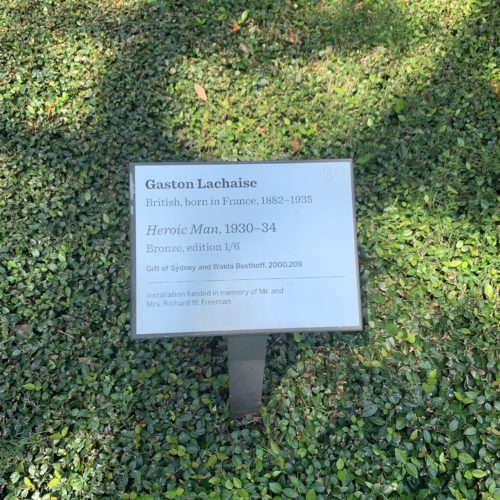 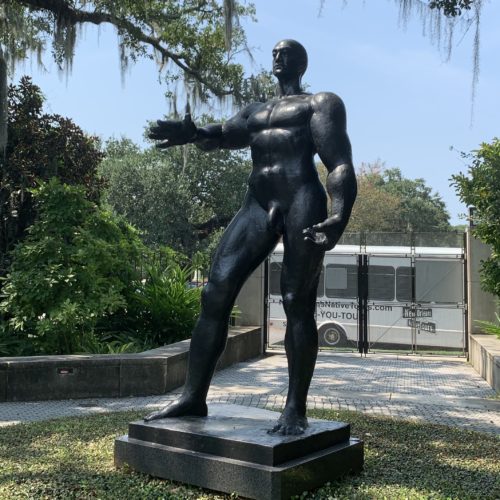 Men already feel that they are expected to be the “breadwinners,” the protectors. Men are supposed to be strong and the “logical” partner. These social pressures have led to a culture of toxic masculinity.  This culture has constantly been finger-pointing to men as the problem, but we have not looked at the culture that makes men feel that they have to be emotionless, unaffectionate, and dominant. Even on Facebook, there’s a reinforcement of what men need to do in order to be strong and “head of the household.” One viral post wrote:

“The HUSBAND is to pay the MORTGAGE, BIGGER household bills and the WIFE should make sure the Home and CHILDREN are WELL attended AND kept IN TACT. All of these NEW SCHOOL rules of ‘WE’RE 50/50 and ‘SPLITTING BILLS’ is complete NONSENSE. No REAL man is going to have you Splitting bills! How can a man be the HEAD of his house when he’s not the one LEADING? And the ONLY men who would complain about this are the ones who are NOT financially stable. Should your ‘HUSBAND’ fall on hard times, a wife should be able and willing to pick up the pieces but if he’s the HEAD, he needs to be the COMPLETE HEAD! #LETSARGUE #ISaidWhatISaid.” (from Facebook post)

The Facebook post puts an emphasis on real men and their roles in society. The Heroic Man encapsulates the same idea with the image he gives of a hero. The post along with the visionary aspects of The Heroic Man paints the ideal of the gender roles afflicted onto men and boys. The feelings of pressure to not only be the hero of your family and society as the post suggests, but the pressures of also looking like a hero according to The Heroic Man can be stifling, to say the least. Take The Heroic Man and his stature, for example. Rachel Anderson did a study on the perception of height and gender roles and summarized how height has been integrated into how successful, powerful, or dominant a person may be in accordance with their gender. Anderson’s research found that shorter men were seen as more “feminine,” which is equated with non-heroic and even negative connotations. Of course, then, The Heroic Man had to be over eight feet tall. He could not be heroic otherwise.

Heroic Man can arguably represent the pressures that so many men and boys feel they face today. According to Jackson Katz’s chapter “Advertisement and the Construction of Violent White Masculinity,” the media, which is targeted at men, has a large, muscular, violent hero as the main character. Katz wrote, “For many males who were experiencing unsettling changes, one area of masculine power remained attainable: physical size and strength and the ability to use violence successfully” (1). The Heroic Man — with Katz’s evaluation of size and physicality and their equation to masculinity and success in mind — could likely be assumed as heroic because of some violent act in which someone or something was defended using physical force. The idea of destruction and pain is then further fed into the male rhetoric of strength and heroism.

Men are faced with the pressures to be like Heroic Man. The equation of man and heroism suggest that one must be heroic to be a real man. Is this the true way of life? Do men have to be heroic? Furthermore, how are people heroic? And how can all men meet those standards? Can they?

Nola Mural Project: A celebration of free speech and artistic expression When having an artist paint a mural on his exterior wall almost put Neal Morris in jail, he did what any art-loving New Orleanian would do -- he started a non-profit called the Nola Mural Project, which pairs walls in the city with artists.

How can neighborhoods develop without displacing black-owned businesses: Voices from The Listening Post
Audio and Podcasts

Nola Mural Project: A celebration of free speech and artistic expression
Art
We use cookies to ensure that we give you the best experience on our website. If you continue to use this site we will assume that you are happy with it.Ok