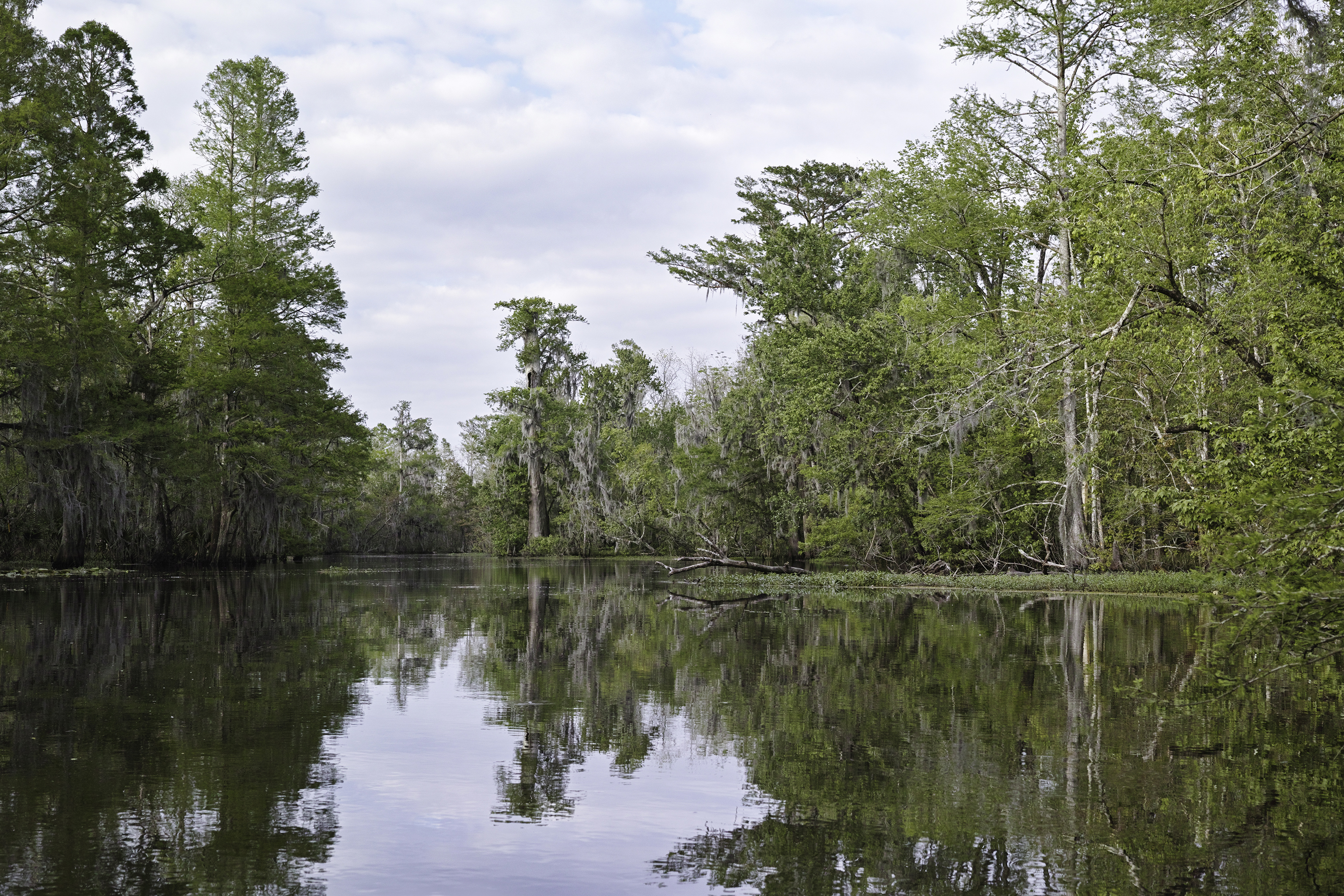 In 2008, Richard Waller started taking digital photographs of Louisiana wetlands from a 12-foot kayak. “This strange and mythic world of alligators and bald cypress trees quickly fascinated me,” he commented recently while relaxing in CC’s Coffee House where his environmental photos are being shown.

“Some of the places where I paddle are serene while some are deeply sad and tragic. ‘Every place is either sacred or desecrated’ here in Louisiana,” he said.

For several years, Waller has been traveling up to Lake Maurepas in St. James Parish, photographing wildlife and swamp vegetation. There, he discovered Blind River, a river originating in the swamps west of New Orleans and flowing northeast into Lake Maurepas. After Hurricane Isaac in August 2012, the lake sustained significant damage when the storm dumped overwhelming amounts of rain, devastating its fragile ecosystem.

“There was a horrible, putrid smell and no sound – no birds or frogs.” But he continued to drive up weekly, investigating its recovery. Within a year, the birds returned. Within two years, the swamp was teeming with new life. “I’d developed so much affection for the place.”

On one trip, Waller heard the sudden screaming sound of engines and bulldozers, demolishing the swamp, accompanied by the roar of airboats racing 50 m.p.h. down the river. “They ground it up, covered it with sand and built work bases for Shell Oil’s pipeline to carry Canadian tar sand to Louisiana refineries.”

In her recent book, Strangers in Their Own Land, acclaimed sociologist Arlie Russell Hochschild ponders the reasons why Louisianans don’t protect their precious natural resources. She spoke with Dr. Paul Templet, retired LSU chemical physics professor. “Oil brought in some jobs, but it causes other jobs to disappear or simply inhibits other sectors –such as the seafood industry and tourism — from growing…Despite the implication of the annual Morgan City Louisiana Shrimp and Petroleum Festival, oil and seafood do not go well together,” Template noted.

[Hochschild asked] the professor whether the appearance of oil in Louisiana reduces the state’s poverty. “No, Louisiana was poor before oil came, and we’re poor today–the second poorist in the the U.S.,” he said. Now, we are poorer another magnificent marsh.

Waller admires the philosophical writings of Wendell Berry, an environmental activist and cultural critic, who was awarded the National Humanities Medal. Berry said: “To cherish what remains of the Earth and to foster its renewal is our only legitimate hope of survival.” 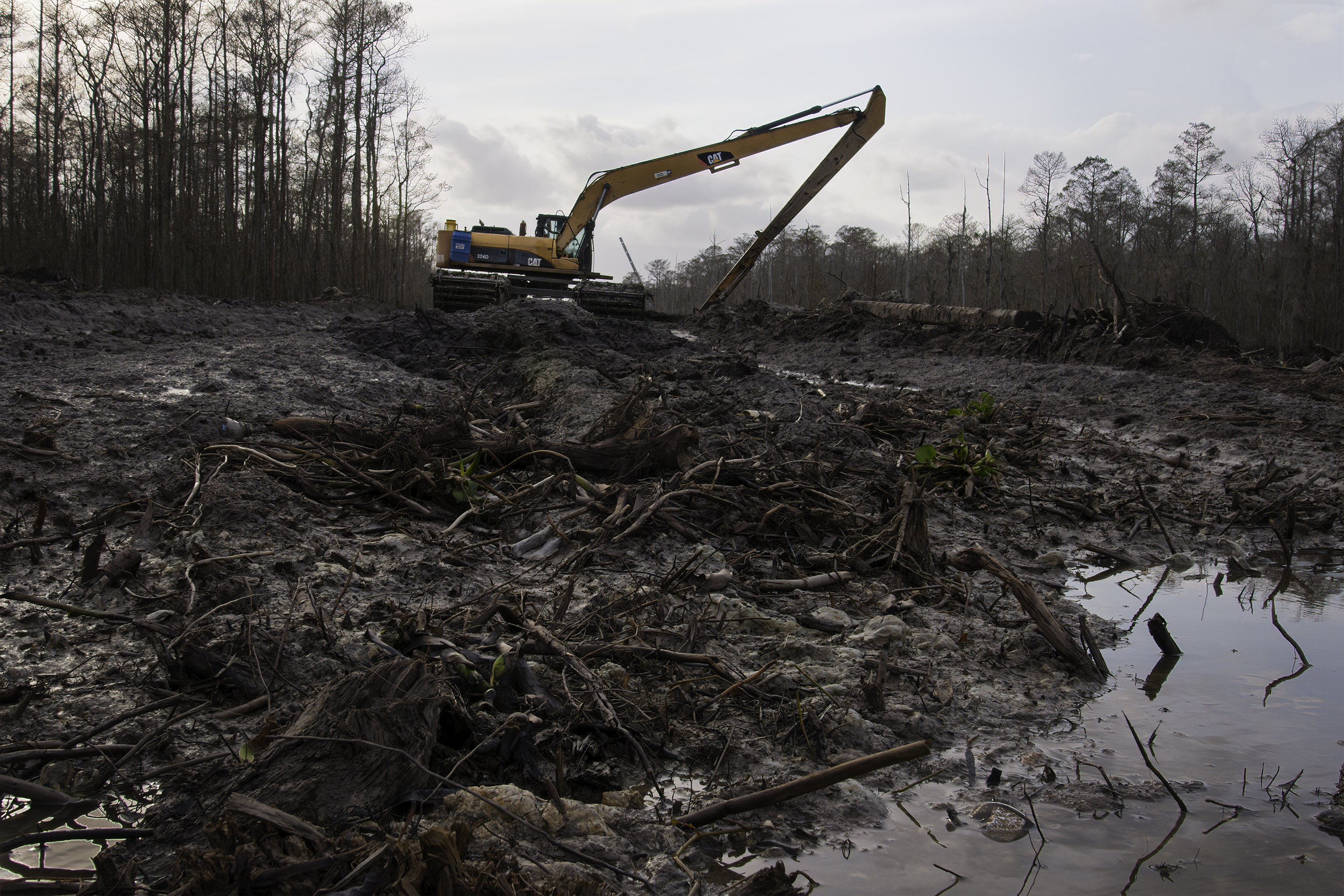 ‘Progress’ makes way for the pipeline.

Waller’s photographs will be on display at CC’s, 2800 Esplanade Ave., New Orleans until September 1. They will be exhibited in The Plaquemine Main Street Gallery in Iberville Parish in October.

Herman Leonard: A return to the Crescent City
Artists
We use cookies to ensure that we give you the best experience on our website. If you continue to use this site we will assume that you are happy with it.Ok