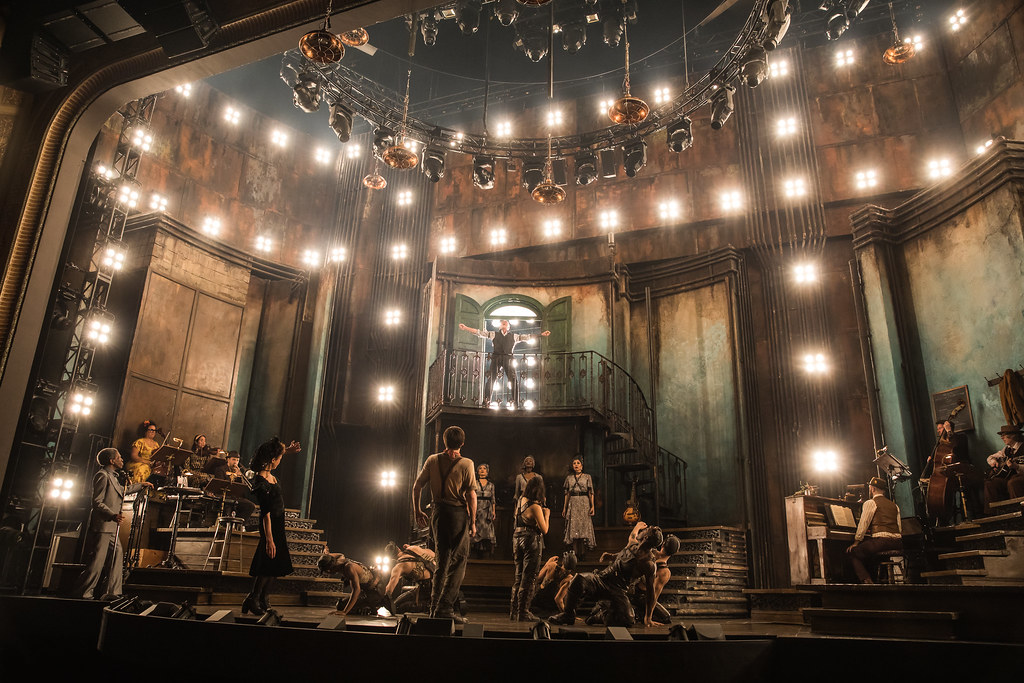 ‘Hadestown’ on Broadway takes a page (or two) from New Orleans with its innovative set. (Photo: www.hadestown.com)

I went in cold on a recent trip to hell.

When I walked into the Walter Kerr Theater on Broadway last week, I knew nothing about Hadestown. Theater is my not-so-guilty pleasure whenever I visit my daughter Katherine in New York, and usually there’s a show or two on our radar. But I had picked this one simply because, back when I was looking for tickets, it had just been nominated for a number of Tony awards.

So I had a double-take moment when I sat down, turned toward the stage, and discovered …. New Orleans. There’s the requisite rusty wrought-iron balcony, an onstage seven-piece band led by a slide trombone, upright piano in the corner, characters who seem to have stepped out of a Tennessee Williams script, and a score replete with numbers that lean heavily toward gospel (“Way Down Hadestown”!).

“The proceedings commence, not with an overture, but with the full company rushing to their places on set designer Rachel Hauck’s loving depiction of the tawdrier side of New Orleans’ French Quarter,” notes Michael Dale in his Broadway World review. L.A Times theater critic Charles McNulty describes the proceedings as “folk opera with a New Orleans soul.”

The play, which won eight Tony awards, including Best Musical and Best Original Score, is a contemporary reimagining by singer-songwriter Anais Mitchell of the story of Orpheus and Eurydice from Greek mythology. When Eurydice dies on their wedding day, Orpheus follows her into the Underworld, ruled by Hades and his winter queen, Persephone. Eurydice may only return to Earth, Hades decrees, if Orpheus can lead her out without once looking back to see if she is following. As with all Greek myths, this tale involves a hero’s journey filled with strength and weakness, elation and despair, and transcendent human suffering and frailty. 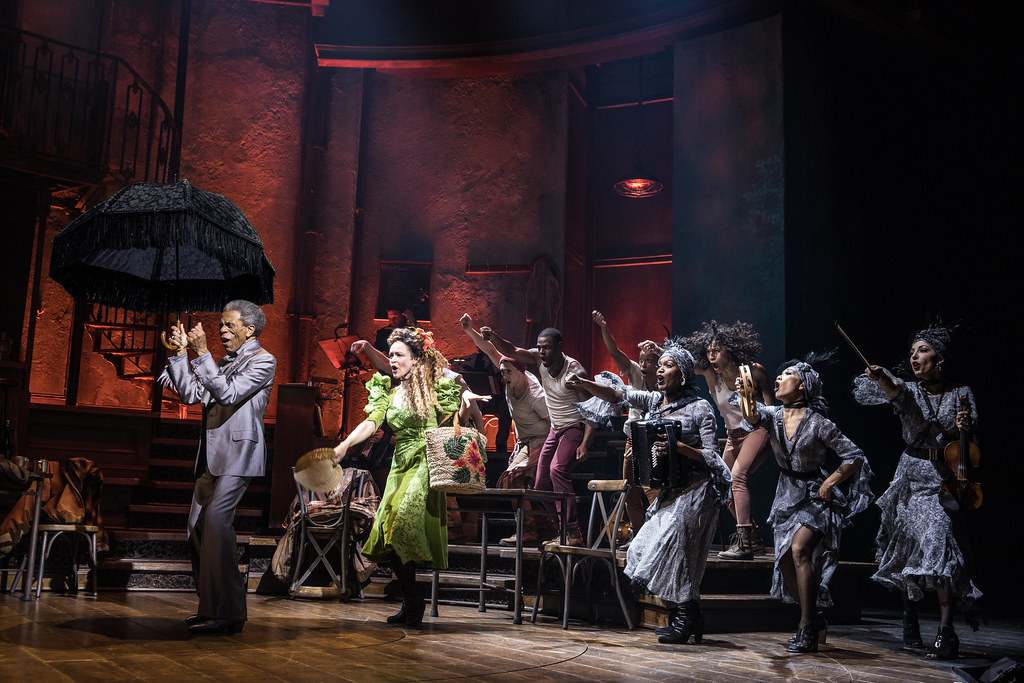 Perhaps that’s why it translates so well to New Orleans. These are people we recognize, characters who might well have been drawn from our own complex and turbulent history, played by actors who seem to draw inspiration from it. The play opens with narrator Hermes (Tony Best Actor Andre de Shields), thin, gray-haired, in a sleek sharkskin suit, high stepping deliberately across the stage. He is classic second-line: Give him a sash and a top hat and he’d be at home in front of a brass band. At one point he opens and twirls a sequined black umbrella. (“It’s definitely New Orleans,” whispered Katherine, as we exchanged startled glances.)

Amber Gray as Persephone, writes McNulty, “has the sultry, somewhat strung-out air of a jazz diva who can still access her heart beneath the weary cynicism.” Sound like a city you know? (”She’s Stella,” whispered Katherine.) And in this particular version of Hades, as the Broadway World article notes, “people are warm, well-fed and bored to death” — surely a view of hell shared by most New Orleanians.

Despite the above references, press on the show generally notes the New Orleans underpinnings only in passing. Perhaps that’s because, though the details lean local, they tell a story that is universal. As the opening lyrics say, “It’s an old tale from way back when. It’s an old song and we’re gonna sing it again.” The central theme of Hadestown has to do with why we not only retell our stories countless times, but repeat them. 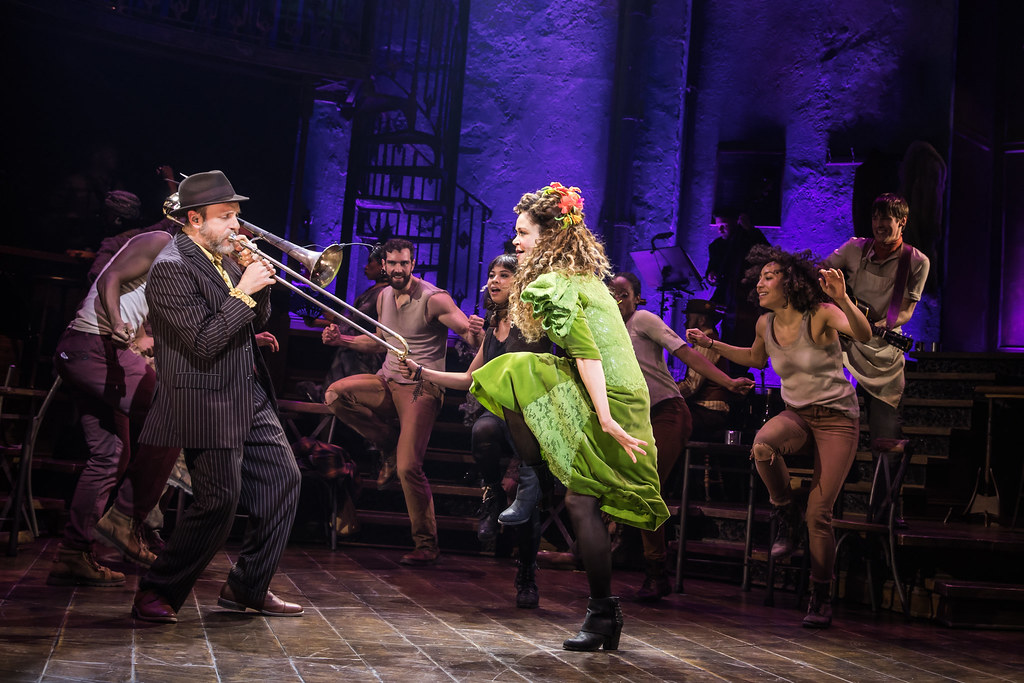 Time Out calls Amber Gray a ‘human jolt of absinthe’ as Persephone in Hadestown. (Photo: www.hadestown.com)

And that reverberates with contemporary issues. Hades (an edgy, creepy portrayal by Patrick Page in the lowest baritone I’ve heard from the stage) uses his tortured workers to build a wall in a plot line that is chillingly current, even though the concept album and song precedes the current administration by a number of years. Elsewhere in hell, workers mine for “good clean coal,” and freedom is defined not by lack of a despot, but lack of poverty. (“Is Hades Trump or Hitler?” wondered the man in front of me. “Does it matter?” rejoined his companion.)

Hadestown producers announced last week that the show will go on national tour in 2020, and New Orleans is among the stops. There are many reasons to go: innovative choreography that merges dance and gesture, cutting-edge staging that includes an aerial ballet of swinging lights, unexpected moments of serendipity (wait, is one of the three fates playing an accordion?), that steampunk-meets-Depression-era New Orleans set with a central ring that rises and descends.

And, of course, all of those New Orleans references, which locals will certainly get.

[…] can see Kevyn Morrow star in the role of Hades for the production of Hadestown, which will be on stage at the Saenger Theatre from December 27-30 as part of the 2021-2022 Hancock […]

Artist in their own words: Kevyn Morrow – Via Nola Vie
12:01

[…] Hadestown is a modern take on the story of Orpheus and Eurydice set in New Orleans. You know, the tale where Eurydice ends up in hell and Orpheus has a chance to lead her out (under the condition from Hades that he can’t turn around to see if she’s following) and they almost make it but then he turns around at the last second, condemning her to stay in hell forever? That story. […]