We’ve got your weekend: New exhibits, premiere films, and theater unlike any other 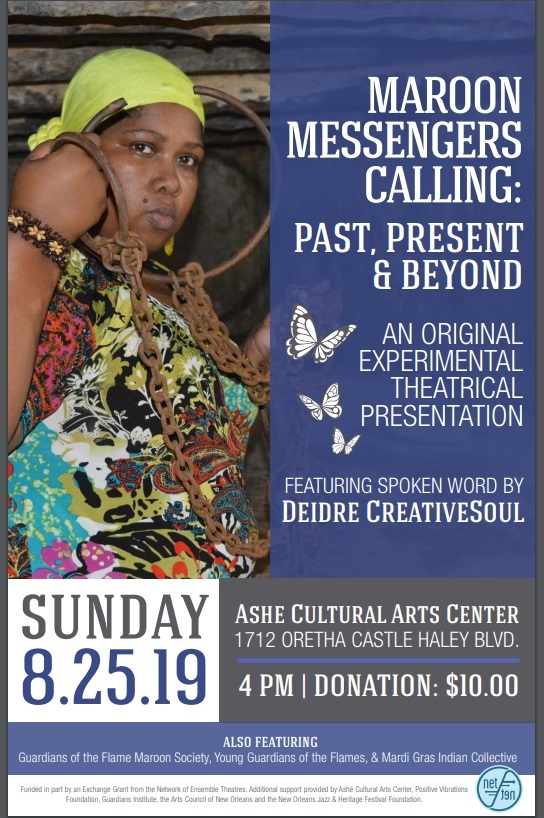 Wednesday, August 21/New Orleans Museum of Art (1 Collins Diboll Circle): The New Orleans Museum of Art (NOMA) has a new exhibit, “The Quilts of Gee’s Bend,” which will be on view now through March 15, 2020 in the Elise M. Besthoff Charitable Foundation Gallery. The exhibition features five  twentieth-century quilts made by the women of Gee’s Bend, Alabama that elevate a traditional craft form to masterful work of intentional art. The women’s use of bold geometric shapes and a fiercely independent design process brought international acclaim to Gee’s Bend quilters. And remember, Wednesdays at NOMA are free for Louisiana residents.

Thursday, August 22/Lower Garden District: Now that the New Orleans season is starting to swing in full effect, you’ll want to be booking tickets for what’s to come in September. Winter Circle Productions (WCP) and Freewater is holding their block party on September 28, and on the lineup they have rappers DaBaby, Rico Nasty, Shordie Shordie and Grip, plus dance music producers RL Grime, What So Not, Graves, and TVBOO.  Local support is rounded out by Mhadi G, Kenneth Brother, Trigem (Spicy Bois), Stone Cold Jzzle, Lango and Nameless.  The specific venue and time for the block party will be revealed closer to September, but you can count on two stages, art installations, food and beverage vendors, custom interactive experiences, big production, exclusive merchandise releases, various VIP offerings and summer block party vibes. Pre-sale tickets are open, and you can register for presale here.

Saturday, August 24/New Orleans Museum of Art (1 Collins Diboll Circle): If you haven’t checked out Bodies of Knowledge at NOMA, get your body in motion to see it. Bodies of Knowledge is also bringing  together ten international contemporary artists to reflect on the role that language plays in archiving and asserting our cultural identities. In conjunction with this exhibition, NOMA will be screening movies selected by these artists that reflect their inspirations, interests, and ideals. On Saturday, they will be showing Garett Bradley’s 37-minute film Sidewalk Stories. In this almost entirely silent film, a homeless artist (Charles Lane) is forced to play surrogate parent when the father of a young girl (Nicole Alysia) is murdered. Taking the child into the depths of the slums that he calls home, the artist keeps the little girl healthy and happy while doing his best to search for her living relatives. As the artist and the child venture through the streets together, they meet a strange assortment of characters while slowly developing an intimate friendship. Ultimately the artist winds up in a horse-drawn chase of the murderers. The film begins at 3:00 PM, and for more details and a full schedule of all the films, you can check out their event page here.

Saturday, August 24/Southern Rep Theater (2541 Bayou Road): Run, Forest, run! Actually, you’ll want to be the one to run straight to Southern Rep Theater to embark on “Gump.” Your pal, Charlie Davis, will reenact the entirety of the film Forrest Gump by himself. He knows that movie by heart. Every line, every character, every nuance. And you never know what you are gonna get with a box of chocolates right? Same goes with the show. You and Charlie won’t know which scenes he will perform prior to show time. Charlie will have a box of Russell Stover chocolates which contain every single scene from the movie. You, the audience, will randomly pick a chocolate out of the box. The scene that is underneath that chocolate is the scene Charlie will do. Oh and this is basically a drinking show too. Ole Charlie will be drinking a few beers onstage and will hand out quite a few also. The “Gump” begins at 7:30 PM, costs $10, and you can find tickets and more information here.

Sunday, August 25/Grow Dat Youth Farm (150 Zachary Taylor Drive): On Sunday you can join some of New Orleans’ best for food, libations and fun in the sun in support of a great cause. All proceeds from the Backyard BBQ and Slip and Slide go to ISLA: Immigration Services & Legal Advocacy to defend the rights of our immigrant communities and advocate for just and humane immigration policy. The BBQ begins at 4:00 PM and goes until 9:00 PM. $35 will get you all you can eat, drink & splash Grow Dat Youth Farm; for full details, you can check out their event page here.

Sunday, August 25/Bywater American Bistro (2900 Chartres Street): Bywater American Bistro, the award-winning eatery from James Beard “Best Chef: South” Nina Compton and Chef/Partner Levi Raines, is wrapping up its Summer Guest Bartender Series with “Tropic Like It’s Hot on Sunday, August 25, from 8:00 PM to 10:00 PM. They’ll have Denzel Brown behind the bar for an evening of creative tiki-inspired cocktails and conversation. But, if you can’t make the “Tropic” night, remember that they have a Happy Hour every Wednesday – Sunday, from 5:00 PM to  6:00 PM.

Sunday, August 25/Ashe Cultural Center (1712 Oretha Castle Haley Boulevard): As the nation reflects on the “20 and odd” Africans who were first sold at the Jamestown colony in August 1619, an experimental tribute to one of the least-known aspects of the African-American experience is preparing to debut at Ashe Cultural Arts Center on Sunday, August 25 at 4:00 PM. “Maroon Messengers Calling: Past, Present & Beyond” is a mixed-media performance installation featuring spoken word by visiting artist Deidre “CreativeSoul” Gantt and special guest Chuck Perkins, visual art by Cherice Harrison-Nelson, Maroon Queen of Guardians of the Flame Maroon Society, original music by Nkem Big Chief Brian-Michael Harrison-Nelson, and a musical ensemble consisting of the Mardi Gras Indian Collective, Young Guardians of the Flame and Congo Kids, who will close the show with a performance in full suited Mardi Gras Indian attire.

We’re sad it’s Wednesday: Photos from the Red Beans and Dead Beans on Lundi Gras 2020 It's just another Wednesday today, but that gives us time to remember all that we did on Monday and Tuesday. Here's a glimpse back with photography by Brandon Robert.

We’re sad it’s Wednesday: Photos from Fat Tuesday in the Marigny 2020 It's just another Wednesday today, but that gives us time to remember all that we did on Monday and Tuesday. Here's a glimpse back at how amazing life in New Orleans is with photography by Brandon Robert.

We’ve got your weekend: Theater, dancing, gallery hoping, and staining your clothes!
Events

We’ve got your weekend: To make you laugh, dance, think, and shimmer
Events
We use cookies to ensure that we give you the best experience on our website. If you continue to use this site we will assume that you are happy with it.Ok