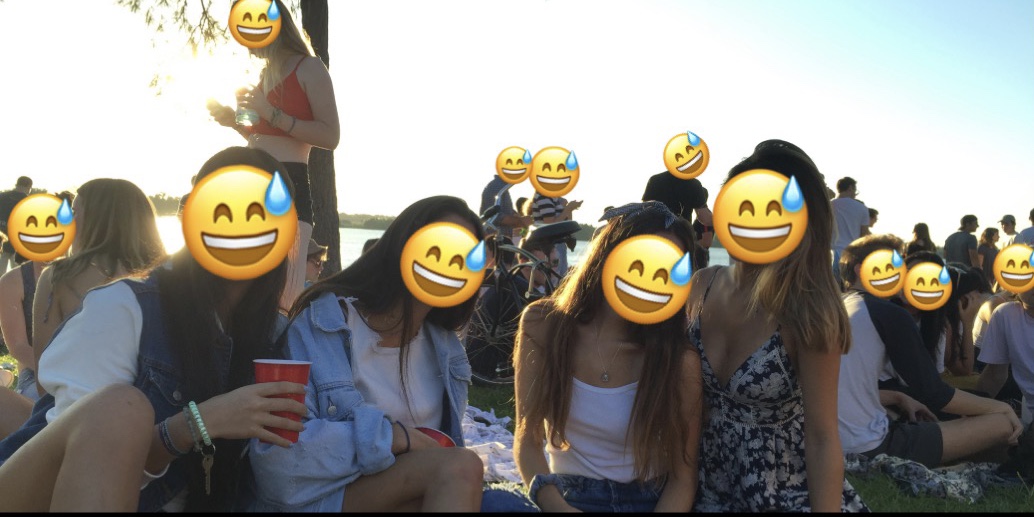 At the Fly, where people live their best life (Photo by: Mia Royce)

*bluned: a phone-induced, mesmerized state that occurs when one’s focus is drained from the world around them and channeled into a fixation on one’s screen; when one’s face turns blue from their screen light

For this article, we were assigned to write about a personal experience that makes us feel weird. A lot of things make me feel weird, but for some reason, I struggled to find something I felt like I could write about for this assignment.

White, upper-middle class, Jewish, from a nice little Boston suburb, I feel so detached from the issues I feel so compelled to discuss — my authorship of them wouldn’t be remotely authentic. In Michel Foucault’s “What is an Author?” he unpacks authorship theory and what it means to own one’s words. His argument that “a text apparently points to [a] figure who is outside and precedes it,” set off a siren in my first-time-publisher brain; acutely aware of the ways I’m tied to my writing, I struggled to pick a topic that I could comfortably know points back at me (1).

Horrified at the thought of abusing my authorship and accidentally pushing something out into the Internet to be potentially misinterpreted as insensitive, I decided to write about something uncomfortable, but much more subtle than many of today’s most pressing issues. Despite being terrified of tethering myself to a text that could result in angry or offended fingers pointing back at me, I present this article to the world knowing at least Foucault would validate my voice and my ownership of this story.

Anyway, I hope that you enjoy it and that it makes you uncomfortable too.

Let me set the scene: You’re sitting in your dorm room and check your phone. You open up Snapchat and see that it’s golden hour; it’s Friday; and all the Pi Phis have whipped out their floral Reformation rompers. The rosé has been popped, the Whole Foods charcuterie has been assembled, and the whimsical Urban Outfitters quilt has been spread out on the grass just so. Lia brought her speaker and is playing some Lana Del Ray remix. Dope. The sun is setting behind the Mississippi River and the Fly appears to be the vibe. It seems that these girls are “literally peaking” and “obsessed with Flyday,” as they laugh, all huddled around their best friends, chatting, sipping wine, enjoying the sunset. Bliss.

This entire scene, in all its Flyday glory, is obviously thoroughly documented on Snapchat, Instagram, and maybe even a special Facebook album feature if we’re lucky. It is captured so artfully, so skillfully, that the music, the laughs, the food, the friends seem to be plucked from a boppy coming-of-age 80’s film and plopped down right beside the Mississippi. How magical.  Sadly, however, even this seemingly real-time, real-life, insider peep into the fascinating lives of these girls is completely and meticulously directed.

Let me set the real scene that for some reason nobody seems to be capturing:

You’re at the Fly and sitting on a red-ant hill. Your denim is way too tight and making you chafe. The wine you’re drinking is warm and cheap, and some Sig Ep with his shirt off won’t leave you alone. The elephant at the Fly is that everyone came here on a strict mission to Instagram. Like everyone else, obviously all you wanted to do was post today and as you scroll through the dozens of pictures from your 30-minute photoshoot, you realize that fucking Lia didn’t tell you you had strawberries in your teeth. Seriously Lia. Seriously. Honestly yes its golden hour, but yes you are also freezing. You left your suite with a cardigan but then Zoe told you your outfit was more vibey without it. Obviously. You look around at all your friends, resting bitch faces on, world off. They are mostly silent, bluned*. The only real conversation taking place on this Grateful Dead tapestry is everyone taking turns asking if they look fat in the pictures they are about to Instagram.

As I just set and re-set the scene, I can’t help but be reminded of sociologist Erving Goffman who argues our entire social world is one big fat setting the scene. I know he was writing in the 60s, but I have reason to believe he must be rolling in his grave looking at our world today. In his book The Presentation of Self in Everyday Life he discusses how we are all actors and the social world is our stage; on this stage we use various props, costumes, and scripts to play out our roles, our “public selves” as convincingly as possible.

When Goffman was writing, the social world only required us to switch between our public and private, on-stage and off-stage characters. Technology presents us with another stage and challenges us to navigate two dueling social realms: online and real life. Goffman defines our backstage as a place “relative to a given performance, where the impression fostered by the performance is knowingly contradicted” and where “the performer can relax; he can drop his front, forgo speaking his lines, and step out of character” (2). The pressure of maintaining a social-media presence strips us of the purity, humanity, and comfort of our backstage lives as our obsession with our virtual performances makes it impossible to truly disconnect ourselves, step out of character, and relax.

Fueling this obsession is the fact that online we are able to fully script, cast, produce, and direct our own plays; under the artificial spotlights we create on our virtual stages, we are simultaneously freed from and protected against the spontaneous forces of reality. In contrast to reality, where life itself prevents us from maintaining a flawless performance, online is a totally different story, and a totally different stage.

Self-produced and self-directed, it makes sense that our online plays are often illusory depictions of indicators of a successful, happy life: friendship and love. Reflecting on our own lives where true friendship and true love may be void, we anxiously turn to our phones and see everyone else appearing to lead fulfilling, happy lives. Fuelled by these anxieties we’re pressured to contribute to these online illusions and further reproduce facades of idealized selves. Research indicates that our social-anxieties motivate us to create “large-discrepancies between [our] actual and ideal self” online and “present [ourselves] in ways that differ from [our] own self-perceptions” suggesting most of us “present idealized selves online” (3).

I set the first scene to feature a relatively mundane gathering of “friends” (I use this term lightly), or at least fun looking girls who, when filtered through Snapchat, appear to be each others future bridesmaids. The next scene I will set is a well-executed illusion of love:

It’s Valentine’s Day and you pick up your phone. Scrolling through Snapchat and Instagram you contemplate your own loneliness as you are blasted with images of everyone else out there clearly having  perfect Valentine’s Days with their perfect boyfriends. You wonder to yourself if you’re the only person single today. Watching snaps of Nicolette and Tony wearing the dog filter while making out across their table at Josephine Estelle you think to yourself, “goals.”  She posts a boomerang of their dirty martinis clinking and captions it “6 months with my love,” and he has a story to match.

And now for that real scene that won’t be captured:

It’s Valentine’s Day and Nicolette just spent an hour and a half hyperventilating/crying to her suite mates about how Tony is borderline abusive and won’t stop flirting with the Kappas in The Boot. While venting to her best friend in pajamas, she also solo-pregamed dinner because obviously she doesn’t think Tony is hot when she’s sober. Her friends reassure her that yes, he does have acne and yellow teeth, BUT he’s hot when the lights are really dim. Strapping on her heels and clomping down her stairs, she murmurs to herself that she can do better. Regardless, the Uber is here. Tony is slouched in the backseat empty-handed and in jeans. She doesn’t know what’s worse, the fact that jeans are going to ruin her alt Instagram at Alto, or the fact that she won’t be able to post a story of the roses and chocolates he didn’t bring. Seriously? It’s Valentine’s Day.

It’s clear that society’s obsession with a perfect self-image is not a new phenomena. A particularly amusing example from history is the fact that we rarely see paintings of aristocrats accurately depicting their flaws. Like my friends FaceTuning their Instagrams to soften blemishes or whiten their teeth, Queen Elizabeth I was also on that wave. Notorious for demanding fictitious portrayals in her portraits, she was always painted with pearly skin and finer features. She even made a law “prohibiting the circulation of unflattering portraits of her” (4). With new technology like Instagram and Snapchat, we have upgraded from directing painters to set the scene to being our own directors of our entire plays.

No longer are we solely the actors in this play of life, but we have promoted ourselves to being the directors and producers and film crew and makeup and lighting and sound and and and…. Armed with social media and an unwavering and obsessive ability to direct the illusions we launch out into the world, why do we feel so compelled to be so dishonest? Maybe it’s because we can, and because everyone else is too?

But aren’t the very tools we use to redirect our lives, recast our actors, rebuild our own stages, and rewrite our scripts really just degrading the realest parts of our lives? As we desperately attempt to “set the scene,” we in turn totally alienate ourselves from the scene itself, the other actors, the entire play, and ourselves.

Maybe real happiness would come from unshackling ourselves from our phones, looking up, and enjoying each other… irl.

Nowhere to go but deep in our phones
Reflections