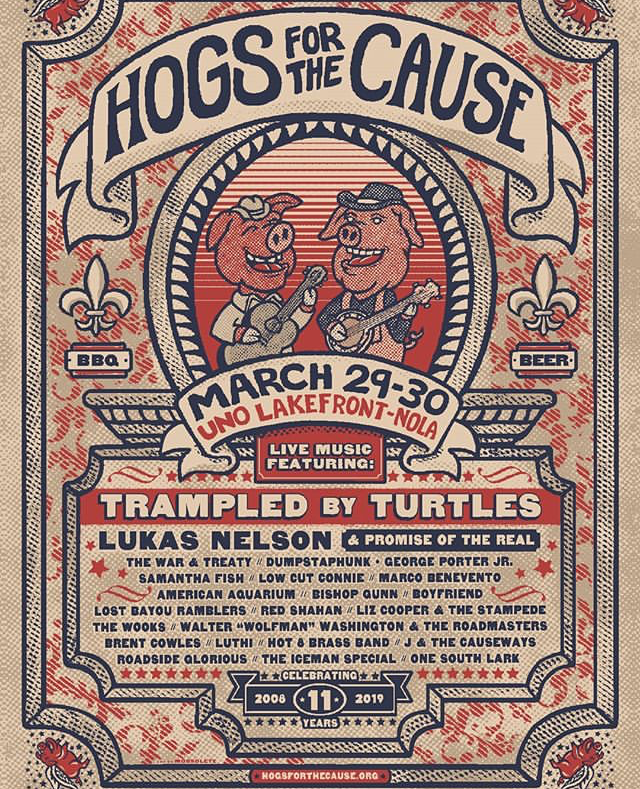 Hogs for the Cause returns to the UNO Lakefront Arena this weekend for a two-day bacchanal of smoked meats and live music.  One again, the festival has booked top-top notch talent from New Orleans and beyond to keep the crowds moving as they explore the far-reaches of the BBQ-verse.  Here are our top-picks for the weekend:

Formed in the indie-rock mecca of Philadelphia, Low Cut Connie have spent the past nine years destroying dive bars across the country with their incendiary performances.  Frontman Adam Weiner is a force of nature, pounding his grand piano with reckless abandon while howling and stomping like a madman. The band’s infectious mix of old school piano rock, sing along choruses, and groove-heavy rhythms makes for a guaranteed good time.  A daytime slot on the main stage will serve as a good introduction to the city of New Orleans.

Liz Cooper & the Stampede have been on a hot streak since the release of their excellent album Window Flowers last year and show no sign of slowing down.  The trio from Nashville have honed their sound into a tight mix of fingerpicked confessional songwriting with propulsive and adventurous pysch-rock jams.  The band’s opening gig for Phosphorescent last fall at One Eyed Jack’s threatened to upstage the headliner; their slot opening the main stage on Saturday at Hogs will certainly set a high bar for the bands that follow.

Married couple Michael and Tanya Trotter have an undeniable chemistry that anchors the roots-gospel outfit The War & Treaty.  Formed in Washington, DC, the Trotters’ soulful harmonies evoke a bygone era while their lyrics are firmly rooted in the here and now.  With an unlikely origin story – Michael served in Iraq shortly after 9/11 and got his start playing piano on one of Saddam Hussein’s old pianos – the Trotters are well on their way to festival headliner status.

Hailed as one of the best young blues guitarists in the world, Samantha Fish has been steadily climbing the ranks of the guitar gods with her ridiculously impressive chops and soulful singing.  Fish relocated to New Orleans in 2017 and quickly established herself as a force to be reckoned with. Often teaming up with Baton Rouge native Jonathon Long, Fish’s shows are master classes in the blues as she shreds on her trademark white Gibson SG and a custom-made cigar box guitar.  Her set at last year’s Hogs was a showstopper, earning her a rare invite for the second year in a row. Get there early to see what the fuss is all about.

If Jimmy Page passed out in a bayou hammock after an LSD-fueled bender, the resulting fever dream would sound something like The Iceman Special.  In just over a year, the band has gone from relatively unknown to landing a slot at Jazz Fest and headlining their own alternative festival, Fete du Void. Brothers Will and Charlie Murry hold down rhythm guitar and bass while elder statesmen guitar wizard Steve Staples conjures up some of the nastiest riffs ever heard in our fair city.  The band is still picking up steam and their nighttime set in the intimate Phelps Dunbar Tent will be the perfect venue to let their freak flag fly.

Recap: Broken Social Scene at The Joy Theater
Music
We use cookies to ensure that we give you the best experience on our website. If you continue to use this site we will assume that you are happy with it.Ok