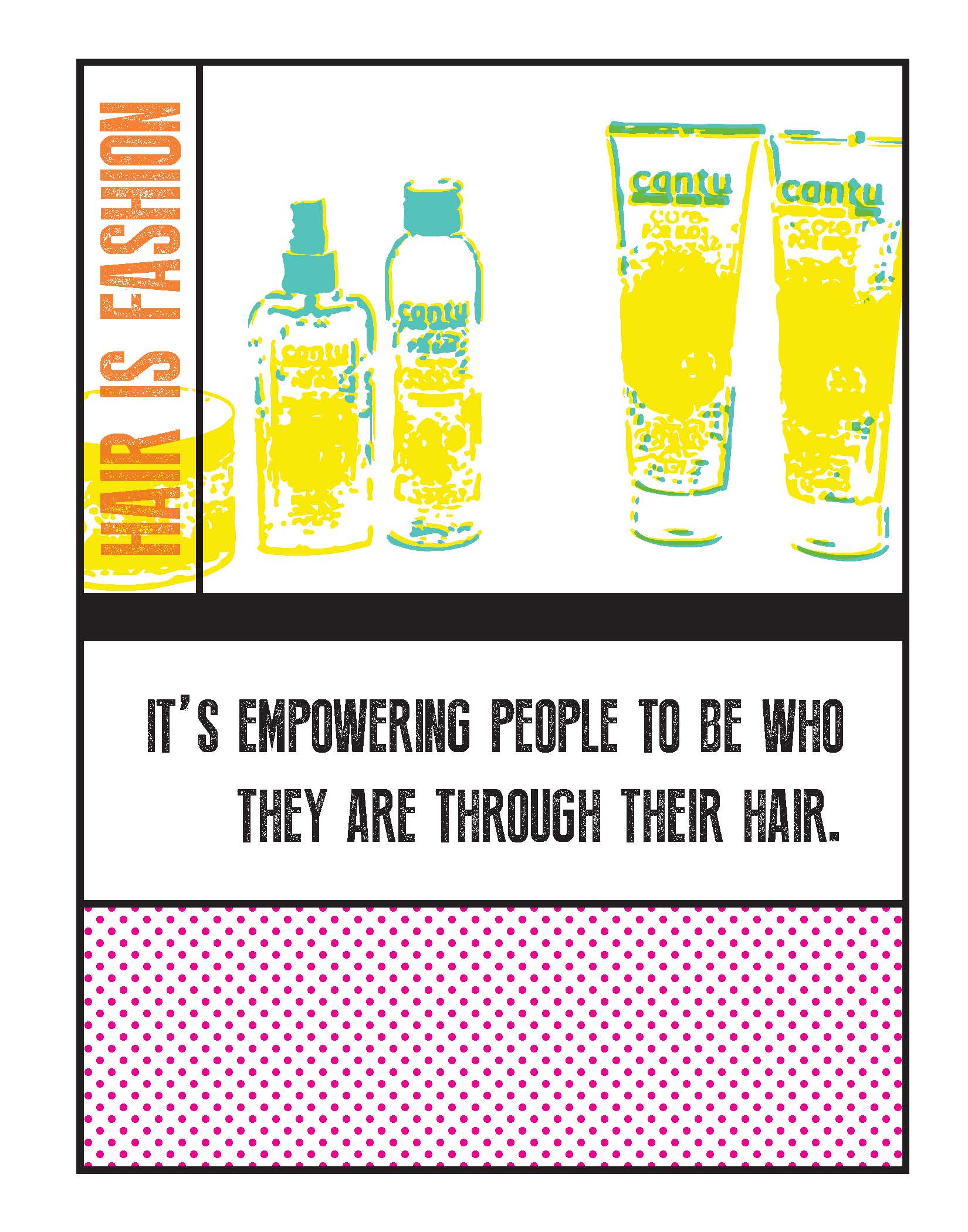 When hair is fashion and fashion is image, how do we retain our own identity? (Illustration by: Julia Berghammer)

“Daddy, how come I don’t have good hair?”

This is the question comedian Chris Rock heard from his three-year-old daughter, sparking his interest in the origins of a topic that could make even a toddler insecure. In his 2009 documentary Good Hair, Rock explores the black hair industry and gains insights on styling, products, and the perceptions that fuel the dynamics of black hair care.

Since the early 2000s, an increasing number of men and women of African descent in the United States have been steadily returning to their roots and embracing their natural hair texture. The Natural Hair Movement saw a strong resurgence around 2011 in New Orleans. In a city with a mostly black population, many of the movement’s supporters believe that natural is the way to go.

“I definitely recommend it, especially with the humidity here…everyone should give it a shot,” advises a barber from HeadQuarters Barber Beauty & Natural Hair Salon.

Natural hair is known for its complex textures that can range from loose to tightly coiled curls. The prominent structure of the hair has caused adverse reactions in the past.

When Louisiana was under Spanish rule in the late 1700s, Governor Esteban Rodriguez Miró attempted to establish social order by introducing the Edict of Good Government in 1786. Miró scolded women of color for their “licentious” behavior and chided their excessive, “extravagant luxury in their dressing.” The edict insisted that women cover their hair with a handkerchief.

Women began to wear tignons, a piece of cloth worn as a head covering. To combat the attempted symbol of shame, women decorated their patterned tignons with feathers, jewels, and ribbons, and incorporated intricate wrapping styles into their daily wear. Instead of disgracing them, these “Tignon Laws” succeeded in uniting the Creole women and allowed them to express their beauty and style even further. The laws went largely out of affect in the early 1800s, but women still wore the head coverings to pay homage to their heritage.

Over a century later, wearing your natural hair was still seen as anything but natural. Black people who sported their afros during the 1970s and 80s were perceived as members or sympathizers of the Black Panther Party. An afro by itself was seen as a statement, causing notable disdain from the white public. This caused more people to tend towards relaxers, a treatment that has been known to have negative effects on otherwise healthy hair.

The most notable chemical threatening the health of black hair is sodium hydroxide. Found in lye relaxers, sodium hydroxide breaks down hair, leaving it straight, but also drastically thinning and weakening it. Relaxers can burn the scalp and cause hair breakage and loss if applied incorrectly or too frequently.

Given the toxicity of hair relaxers, many argue whether they should be applied to children’s heads at all. In the past, however, young girls considered their first hair relaxer as a rite of passage. Theresa Smith, a recruiting project assistant at Tulane University’s business school, recalls the feeling of getting her hair relaxed as a young girl. “We were made to feel like our natural hair was just too much trouble to deal with.”

Natural hair is widely thought to be a hassle. Any black woman can tell childhood horror stories of their mothers pulling and stretching out their bunched, coiled hair to press a scalding, metal-toothed comb into their roots. Though the result is indeed smooth and pretty, scalp burns are common as well as a mother’s snappy retort that said burns would not have happened had one just sat still.

Relaxing and straightening a child’s hair was far easier for parents to handle, but it begs the question of whether it was necessary for the child. Chendre, a hair stylist and makeup artist at Lace Xclusive Salon, experienced a similar feeling when she transitioned to natural hair in 2012. “Most people when they got relaxers they were kids, and their mom made up their mind for them. Then they realized [when they were older], ‘Hey, my hair is not really that bad.’”

Chendre also believes that societal pressure and the nonexistence of natural hair textures in the media fueled people’s transition to straighter, more processed styles. “That’s what everybody thinks is hot, what’s poppin.’ Everywhere that you look, like all the magazines and stuff, everybody’s hair is straight,” she says, gesturing at the high-fashion magazine covers decorating the hot pink walls of Lace Xclusive.

Dominick Desdunes, known in his circle as D Nick Tha Barber, agrees with media presence being an issue. “They say [it was] to look more,” he pauses with a nervous chuckle before admitting, “Caucasian. More like how Malcolm X used to process his hair and James Brown made his hair look slick…to look ‘better.’”

For D Nick, Chris Rock’s documentary was a game changer. “It was real good and that opened my eyes, especially being a barber and seeing what chemicals can do to your hair. I came from an S Curl, and now I have dreadlocks. So, I understand the process of going through a process.” (S Curl products act as a relaxer for men, smoothing out their hair to provide a looser curl.)

Along with assimilating to what was deemed more beautiful, some people have experienced discrimination in the workplace for wearing their hair as it naturally is. “They still do it these days,” says an exasperated Nahria. “I have a friend who’s [dread]locked up. [Her employer] told her she could only wear them pinned up. She couldn’t wear them down. But she moved on from that job. That was corporate, though. If it’s not wild and all over, I don’t see the big deal with it being down.”

Today, barbers and hairstylists around the city find that their businesses receive many more natural clients than they did in the past. “I barely ever find someone that’s relaxed now,” says Chendre, speaking of her salon experience and her day-to-day life in New Orleans.

“I see a lot of people inching into side cuts and undercuts and big chops,” say D Nick of popular trends in the community. “It’s a lot of things going on in the Natural Hair Movement and I like where it’s going.”

Hairstylists may owe this surge in business to the New Orleans Natural Hair Expo (NONHE), which will celebrate its fifth annual celebration this July. Founder Monique Herbert is proud of the impact her “natural hair party” has had on the residents of the city. A New Orleans native, Herbert now resides in Houston, but she returns to her hometown to celebrate her roots. NONHE brings natural hair influencers, bloggers, brands, and consumers into one place. “We can embrace the texture and just embrace learning about how to care for the texture,” explains Herbert. “I think for a while it was one of those things where a lot of people, a lot of women, just didn’t know how to take care of it. It’s a platform that allows us to educate women.”

The growth of the Natural Hair Movement could be attributed to the business NONHE has brought into the city. In the past, natural hair wearers could walk into stores like Walgreens or Walmart and not be able to find products suited to their hair. Brands like Shea Moisture, Curls, Carol’s Daughter, and Kinky Curly were either found sparingly or even nonexistent, leaving customers to hunt down a specialty store for their products. Considering the demographics of New Orleans, many agree that stores should not have been lacking in black hair products to begin with. Now, natural hair supporters report much more diversity in the hair products stocked by stores.

Though Smith believes that NONHE contributed to the growth of products available in the city, Herbert insists that the Natural Hair Movement was on the rise before the event began in 2014. Regardless, she believes that NONHE has helped bridge the gap between brands and consumers, giving people the resources to style themselves how they see fit. “The old saying, ‘you have good hair’ still rings true in the back of some people’s heads…I think we’re getting better at embracing different looks.”

Most importantly, Herbert believes that celebrating natural hair encourages younger girls to do so as well. “I think teaching young girls you don’t need to look like me, you don’t need to look like her, you can look like you and still be poppin.’ You don’t have to be a carbon copy of someone else. The older women are embracing it. It gives girls options where they don’t feel like they have to conform to a certain look or a certain way.” Overall, Herbert believes that acceptance is the key. “I think [society] is getting more accepting because we’re getting more accepting of each other and what our hair looks like.”

What was once a source of shame for some has now become their pride. As the movement grows, natural hair enthusiasts are grateful for the hairstylists and products they use to guide them through their natural hair journey. They hope to continue experimenting with their hair, and they invite others to do the same. “It’s allowed them to express their creativity,” says a barber. “It’s empowering people to be who they are through their hair…fashion is the same way, and nowadays hair is fashion.”

A deeper look at Tulane’s diversity
Race and Ethnicity