Editor’s Note: New Orleans is more of a matriarchal city than most. Yes, patriarchy exists here, but New Orleans women have held influential positions in families, businesses, the community and the arts in numbers rivaling few other U.S. cities. So much of what makes New Orleans such a fabulous city is undergirded by the (sometimes unrecognized) hard work and sharp intelligence of its female residents. Exhibit #1: Oretha Castle Haley. #2: Ella Brennan. #3: Mahalia Jackson. #4: Joyce Montana. #5: Ruby Bridges. #6: Leah Chase. #7 +++: Pick anything you care about in New Orleans, and you can pretty much guarantee there’s a woman behind it, supporting the work through sweat and, sometimes, tears. This summer, we highlight a few of the city’s unique female voices. Next up in our series: Nicole Deggins, birth advocate and founder of Sista Midwife Productions, whose work in spaces all over New Orleans aims to shift the conception-pregnancy-birth narrative from the strictly clinical to the community-based. 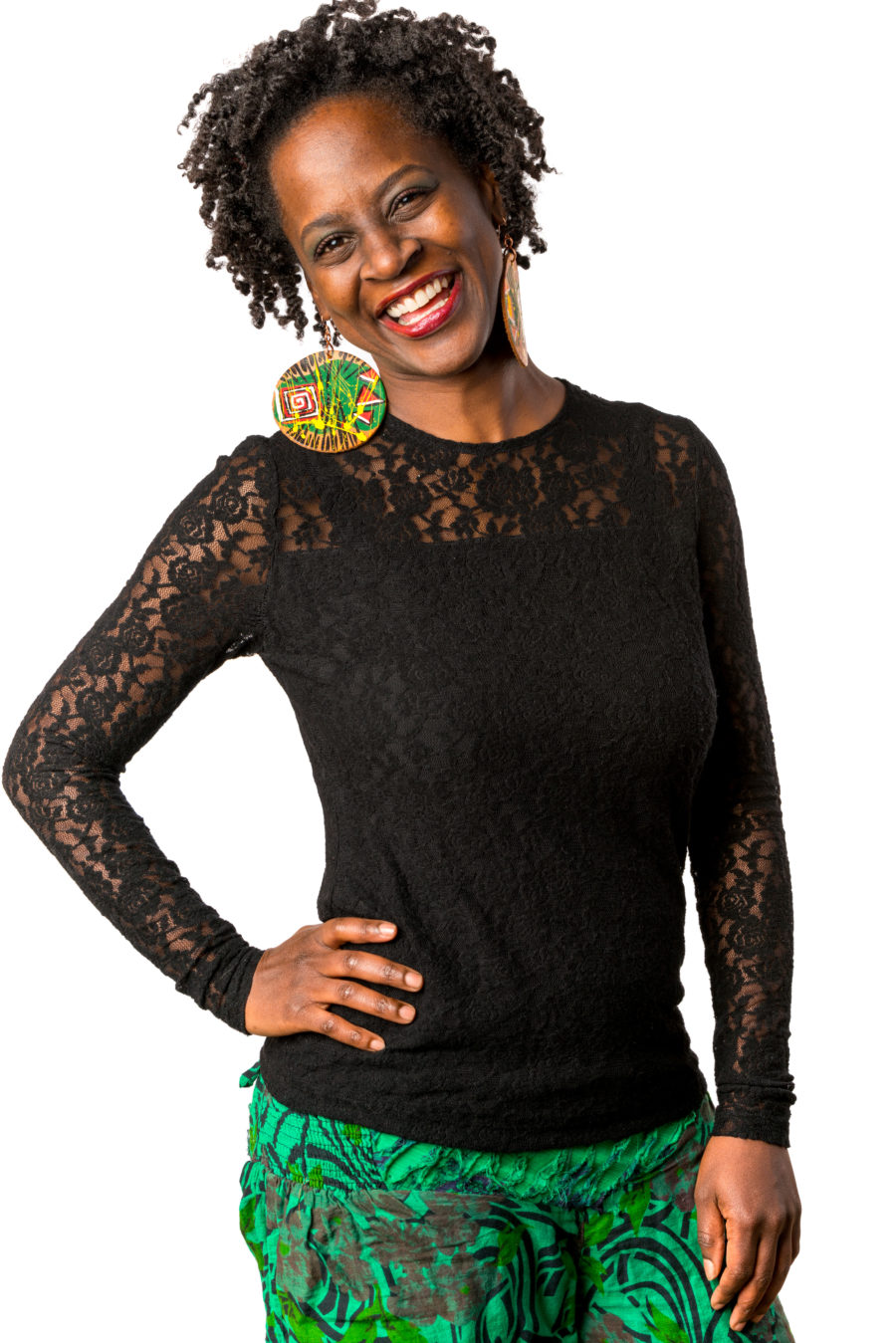 Where: All over New Orleans

A parallel runs between Nicole Deggins’ wide-ranging experience in obstetrics and the evolving birth community. Starting as a hospital nurse, Nicole moved on to work in a birthing center and as a traveling nurse, eventually coming back to her hometown and devoting herself to midwifery, birth advocacy, and Sista Midwife, her doula directory and doula training business.

She’s seen an increased interest in alternative maternal care and birth options in recent years, and several local hospitals have expanded their facilities to accommodate women’s desires for a less clinical, more personal birthing experience of their own. And Nicole herself has contributed to this new wave of birth advocacy: she holds doula trainings  2-3 times a year, speaks regularly at WIC meetings, panel discussions, and gatherings of various medical boards, and puts on several events through Sista Midwife each year.

Right now, Nicole is focused on expanding the scope of her work through partnerships with other Crescent City organizations and connecting with younger mothers. We spoke about the state of maternal care across the country, the mothers of modern gynecology, and the difficulty of finding time to take care of yourself during tumultuous times.

Nora: Tell me about Sista Midwife and what you do.

Nicole: My vision and goal is to work inside the community at many different levels to create a paradigm shift and really get people to think differently about conception, pregnancy, and birth in order to change the narrative that tells us black women and black babies are dying more. They are, but instead of always focusing on that, let’s focus on how to prevent those things and to raise awareness about not just the issues that are the problem, but about options and opportunities and other ways of thinking so we can literally change that.

Since I do doula trainings, I also do doula mixers. We had one in March—we had people telling birth stories, we had pregnant women there, we had doulas there—it was an opportunity to hear different types of information without being in a childbirth education class, which also changes things for us. I think we need to bring birth back into the community. Home birth, yes, but why is birth and pregnancy this scary thing way over there? It needs to be embraced by everybody. It’s not just for the pregnant woman, it’s for the fathers and the cousins and the aunties and the nieces and the grandmothers and everybody.

Nora: What are kind of the events does Sista Midwife put together?

I do this event in September called The Art of Birthing. This is my third year doing it. My vision is that [it] will become this humongous, phenomenal thing. The vision with it is, again, bringing information in this unique sort of way. It’s all fun stuff. We’re gonna have a paint n’ sip, an art exhibit, [and] a film festival. All these things shift the narrative to another place and another way of conversation. We’re also gonna do a spoken word event with Sunni Patterson, a famous spoken-word artist. So you’re gonna come out and see Sunni, and in the middle of that, you’re gonna pick up some literature about maternal and infant mortality, safe sleep, induction, midwives, and doulas. So, it’s not like we’re pouring it down your throat, just giving people information.

I didn’t do it this March, but in previous years I’d done something called Our Births, Our Stories. Last year we did a series of exhibits of women who were integral in current, modern-day obstetrics. People who we don’t think about or know about. Most people are not familiar with Dr. Marion Sims. He was a monster. He was a physician who is now called the father of modern gynecology. He was a horrific, horrific, heartless person who did multiple surgeries on enslaved African women to learn how to do different surgeries and to perfect equipment. He did these surgeries without their consent, obviously, and without anesthesia, even though, at the time, anesthesia was available. When researchers found Sims’ diaries, they found the names of three of these women: Betsey, Anarcha, and Lucy. So we did something that honored them, the mothers of modern gynecology. We also had a speculum station, because that was one of his things too. We had an exhibit about Henrietta Lacks, and we also had an exhibit that honored the wives and girlfriends of the Tuskegee Experiment, because, certainly, [the men] were gettin’ it from somewhere and giving it to somebody. We also did an exhibit on forced sterilization and had a panel discussion. Again, raising information in different ways.

Myself and another young woman are creating something called The Birth Story Project. We’re gonna start collecting, taping, transcribing birth stories. When we do this, it’s important we have counseling available in case people are triggered while sharing their stories. Ayanna from True Love Movement is gonna be a part of that.

I’ve worked in hospitals across the country, so when I speak at events I give examples. I’m not just sharing what I heard or what I read in a book. This is what happened with this young woman, this is how she changed that. This is how she advocated for herself, and you can do that too. Or, this is how she didn’t advocate for herself, and this was the outcome of that. […] I have all these stories floating in my head and I can just pull them, depending on the topic. I’ve seen so many births.

Nora: How did you get started in this work?

Nicole: I started as a nurse in University Hospital in 1994. I liked it, but I didn’t like what I saw. I thought, ‘This is not okay,’ the way women were being treated, the way they were teaching fodder, the way they were being silenced. I didn’t know what the right thing to do was, because I was 22, and I was just learning from the people who were teaching me, but inside of me, I was like, ‘This is not okay.’

Then I went to midwifery school. I helped open a birth center in D.C., and in Mississippi. Both of those jobs ended unexpectedly. Then I started doing travel nursing. In the midst of that, I got really connected to the fact that shit is bad. Everywhere. Like, this is ridiculous!

In between that, I met Shafia Monroe, who’s a birth advocate, a midwife, and a forward-thinking person around infant and maternal mortality. She’s an elder in the black birth work community. I came home to New Orleans in 2010 and started working closely with her. Throughout my life, I’ve been in and out of community service and advocacy work. When I moved home I started working directly with Shafia and got involved in a different way with perinatal disparities, infant outcomes, and black maternal care.

Sista Midwife Productions was initially started to provide information to mamas, one-on-one. But I quickly realized that that wasn’t gonna work, in terms of making a big change. I wanted to make a big impact, and talking to one mom is beautiful, but when I talk to 10 doulas, that means I’m talking to 100 moms.

I started the Sista Midwife directory because we were on social media, and everybody was asking if there was a black midwife where they lived. I was like, ‘This is insane!’

Nora: Are there any concerns around birth and childbearing that are particular to New Orleans, in your opinion?

Nicole: Yes and no. It’s South, right, so we have a different type of patriarchy and racism that exists. But the patriarchy is everywhere, and the racism isn’t the same everywhere, but it is everywhere, because we’re all raised in America with unconscious bias. We all have it. So even though it’s not the overt racial tension like in, let’s say, Missouri, it’s there, i.e. Mike Brown. So many places that I’ve worked, I would see the same patterns. A lot of people here think it’s so bad in New Orleans, but I promise you, it is not much better anywhere.

Nora: Are there any spaces that inspire you and your work? What’s your self-care practice look like?

Nicole: My self-care, unfortunately, is obsolete right now. It doesn’t exist, I don’t have it. I’m working on that. I lost my mom two years ago, so my life has spiraled, pretty much uncontrollably, for the past two years. I’m just now in a place where I’m able to figure this thing out again. I’m starting over. But self-care for me, is going to green spaces—the bayou, the lake, City Park—and going to festivals. I love that festival energy.

Very good explained. I like how you write the post. Thanks for the great info.
Visit tokfollowers

[…] experience and what makes a strong city. Okay, here’s an example. I did an article about Nicole Deggins, from Sista Midwife here in New Orleans. She does fertility work and maternal care with Black women. I asked her if she […]

[…] experience and what makes a strong city. Okay, here’s an example. I did an article about Nicole Deggins, from Sista Midwife here in New Orleans. She does fertility work and maternal care with Black women. I asked her if she […]

Interview: Nora Daniels – Via Nola Vie
Recent Posts on ViaNolaVie
Become a ViaNolaVie Patron!     Your donation supports the work of ViaNolaVie to: Provide a platform...