Editor’s Note: New Orleans is more of a matriarchal city than most. Yes, patriarchy exists here, but New Orleans women have held influential positions in families, businesses, the community and the arts in numbers rivaling few other U.S. cities. So much of what makes New Orleans such a fabulous city is undergirded by the (sometimes unrecognized) hard work and sharp intelligence of its female residents. Exhibit #1: Oretha Castle Haley. #2: Ella Brennan. #3: Mahalia Jackson. #4: Joyce Montana. #5: Ruby Bridges. #6: Leah Chase. #7 +++: Pick anything you care about in New Orleans, and you can pretty much guarantee there’s a woman behind it, supporting with work through sweat, and sometimes, tears. This summer, we highlight a few of the city’s unique female voices. Next up in our series: neighborhood leader and long-time resident Julie Graybill. 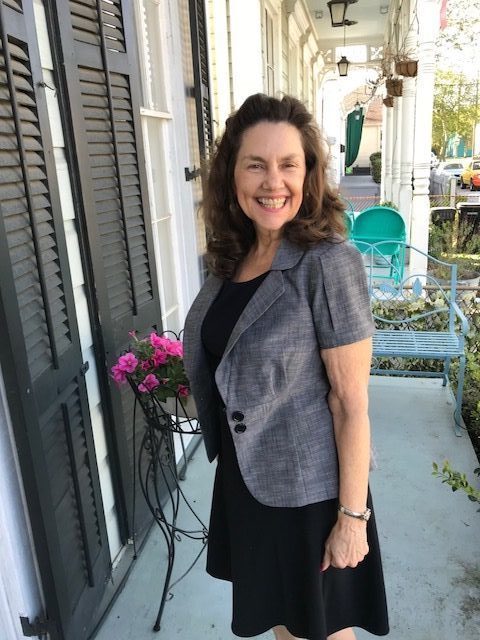 What: Secretary of the Faubourg Marengo Neighborhood Association

Where: Faubourg Marengo, a six street stretch (Napoleon to Peniston, Magazine to Tchoupitoulas) uptown near the Irish Channel, part of the area referred to on maps as East Riverside. According to Julie, the Preservation Resource Center  urged Faubourg Marengo to become an official neighborhood several years ago.

Julie Graybill moved to New Orleans for college in the seventies and never left. When she moved into her Faubourg Marengo house in the eighties, she says, pizza shops wouldn’t even deliver to her neighborhood, it was so dangerous. But things have changed a lot since then, Julie says, since Katrina especially. She attributes the recent explosion of new neighbors and eager businesses, as well as rising property values, to the fact that Faubourg Marengo and some of the surrounding neighborhoods didn’t flood in the storm. Sadly, the intense interest in the area has also displaced many residents; Julie says she couldn’t afford to move to Faubourg Marengo now, rates being what they are. Julie moved in before all that, and since then she’s kept a steady eye on the changes happening in her “sliver on the river.”

Nora: Have you lived here all your life?

Couples and young people bought those houses in the 600 block of General Taylor. That was a real game changer for us. Before Katrina, we had about 40 blighted houses. We used to be the red-headed stepchildren on this side of Magazine. But we didn’t flood in Katrina, so we came up in life. People wanted to move here, and people wanted to move back to New Orleans. People started moving in and renovating houses.

Now, something that would have cost a couple hundred thousand is selling for $800,000. I’m telling my mom, who hasn’t been here in a few years, ‘You know, the house down the block sold for $850,000.’ And she goes, ‘There is no way anything in your neighborhood could sell for that much.’ But of course, it displaced a lot of people. But the pillars of our street, two African American women who were there before me, they’re still there. They’re very beloved women. One of them had us to her 80th birthday party. Miss Bessie and Miss Freddie.

N: How have you seen the neighborhood change demographically?

J: When I first moved in there were no children, especially Caucasian children. People with children would move to Lakeview. But since Katrina, it’s lots and lots of children. A lot whiter. We always joke in my group of friends that none of us could afford to buy now. It’s just wild, how the property values have increased. We don’t have the Airbnbs like Treme or Bywater or Marigny. Those people are really suffering. Ours are very quiet—you don’t even know they’re Airbnb. At least it’s not disruptive or crazy. But you’d much rather have real neighbors.

N: The people displaced in your neighborhood, do you know where they went?

J: No. There was Section-8 housing here…one black lady, she used to have these fish fries that I would promote all the time. Elaine Smith. Then she couldn’t afford the house, and she ended up in a housing project, which is very nice, actually. I went and visited her. I can’t remember the name.

N: The number of people who show up at meetings about Airbnb, all the talk about it—it really shows how invested New Orleanians are in their neighborhoods.

J: We have a new Councilperson, Jay Banks. We had a meeting a few nights ago at a little church in our neighborhood and he came with a 102 fever. But he said he didn’t want to miss it. And I was so happy, even though he was sick, because the whole meeting was a meet-and-greet about him. He’s a former king of Zulu, our new Councilperson. I just saw on Facebook he’s meeting with the King and Queen of Spain today, and someone commented that this is the first time they’re meeting a king of Zulu!

On public investments and who they’re for

J: Right after Katrina, I would go to these planning meetings for neighborhoods in this area, the Garden District, the Irish Channel, us, maybe Broadmoor, and Central City. Of course Central City flooded. So in the meetings, people in our area wanted to talk about potholes or something, and it made me feel guilty. I can’t be talking about potholes and this petty stuff, with these poor people. We only have so many resources—they should go to Central City. They’re still digging out! It was a bad place, but you know, it is up and coming, now.

N: Which makes me think—who is it up and coming  for? It’s sad that you have to think about the greenways or parks or schools coming into a neighborhood that didn’t have it before and who is this actually for? Is it for attracting wealthier people or is it really for the people who actually live there?

J: I’ve thought about this so much. Gentrification is a two-edged sword. My liberal roots say, ‘this is so bad,’ then I look around, and I don’t see any blighted houses. This house was a burned out crackhouse and somebody’s renovated it. We used to have a lot of murders in this little area.