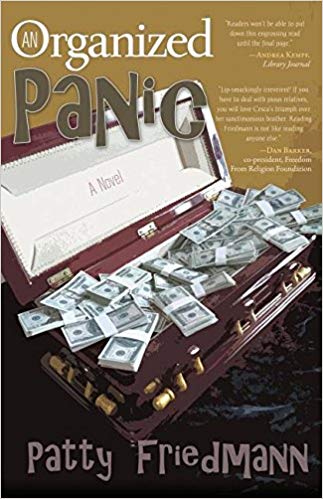 In the words of New Orleans’ own, Patty Friedmann, “All fiction has a sort of autobiographical element to it, and if you don’t see that, you’re lying.” Ms. Friedmann does not shy away from this reality in her body of darkly comic literary work, and lucky for her readers, her history makes for some rich stories. Her frank irreverence and shocking honesty single her out as a unique, contemporary creative.

Born and raised right here in New Orleans, Patty grew up with two Jewish parents of greatly different backgrounds. Her mother was raised with affluence, while her father barely escaped the Holocaust, forced to leave his mother behind in Germany. Patty has mentioned that she writes for two reasons: vindictiveness and vindication.

As a fellow Jew who recently visited Israel where I experienced the comedically (and one might say necessary) sarcastic behavior of Jewish Israelis forced to fight in a war they may or may not support, I think Patty and I share a collective trauma; and thus, some understanding of her vindictive and vindicated, yet hilarious writing style.

As a child, Ms. Friedmann remembers feeling unattractive and overweight. Her mother supported these insecurities by suggesting Patty resort to humor so as to make her peers like her more. Looking back on these memories, Friedmann gives them credit for her pull towards dark comedy. When Friedmann talks about herself, she does not speak with praise. She considers herself a bit obnoxious and unlikeable. While I find this frankness ironically charming, she seems to be completely serious. This is what happens when a mother raises a daughter through the lens of harsh critique. It also births bravely honest writing.

Patty claims that good writers must have a skewed(or at least unique) perception of the world around them. I think Patty would agree that New Orleans inspires such perceptions. Its eccentric setting naturally suits the dysfunctional relationships explored in every story she writes. She believes that only native New Orleanians can truly understand her stories at their deepest core. Patty’s style always has depth in that her comedy stems from a deeper pain and seriousness. This greatly parallels the essence of NOLA. As much as NOLA is a city full of struggle, trauma, and painful history, it is also a city of creation, community, and celebration. Examining Patty’s work by combining her New Orleans background with her complicated relationship to Judaism makes a great deal of sense.

Just as her writing illustrates, families are often dysfunctional at best. Friedmann’s family is no exception. She remembers being at her college graduation and watching her brother, who she describes as a “fundamentally crummy person” (ah, there’s that charming honesty) cry out for the center of attention by announcing his decision to become a Rabbi. This memory serves as the birth of inspiration for her most recent novel, “An Organized Panic.”

In “An Organized Panic,” Patty explores the relationship between an Atheist named Cesca and her brother, an evangelical born again Christian.  Ronald has a business cleaning up after murder scenes. He found faith when he decided to pray at work for a particularly gruesome scene and was praised for doing so. This brought about the name of his new business, JesusCleanup.  The name of this fictional business, JesusCleanup, perfectly captures Patty’s sardonic spirit. Cesca, who is loosely based off of Patty, feels skeptical of Ronald’s newly found spirituality. The siblings grew up in a secular humanist family, and Cesca never trusted Ronald’s ethics.

As a self-deprecating person, Patty struggles to make her characters, who are so often based in reality, likable. Her daughter even told her that her first draft of “Organized Panic” was too unenjoyable because of how unlikable Cesca read. As a result, Patty makes it a point to give both Cesca and Ronald’s characters a more of a sweetness and in some ways, depth, than she considers her own life to have. As a fellow self-critical Jew, I personally don’t believe that Patty is as unlikeable as she claims to be!

In her latest work, Patty has assembled a series of short stories written throughout her career. Each story shares a darkly comic tone, vulnerable elements of reality and circumstances perfectly fitting to New Orleans. Just as she captures stories and relationships based very much in her own experience, her stories show the raw, gritty, beautiful, reality of New Orleans, as opposed to the facade created for the tourism industry.

As cynical as Patty may seem, when she looks into the future, she is excited. She feels that she was born too soon. Her stories often don’t grab readers until a few years after they are written because they are often ahead of their time. She feels that her atheist and liberal themes scare the audience and publishers around her, but as time inevitably moves forward, these themes will become more and more appreciated and accepted. Patty Friedmann is an inspirationto all of us to stay dedicated to our past, while remaining honest and bold for our future.

This piece was written by Madeline Kolker, a Big Easy Magazine contributor. This content was originally published with Big Easy Magazine, a publication dedicated to being a progressive voice for New Orleans and a soapbox for residents in every neighborhood.