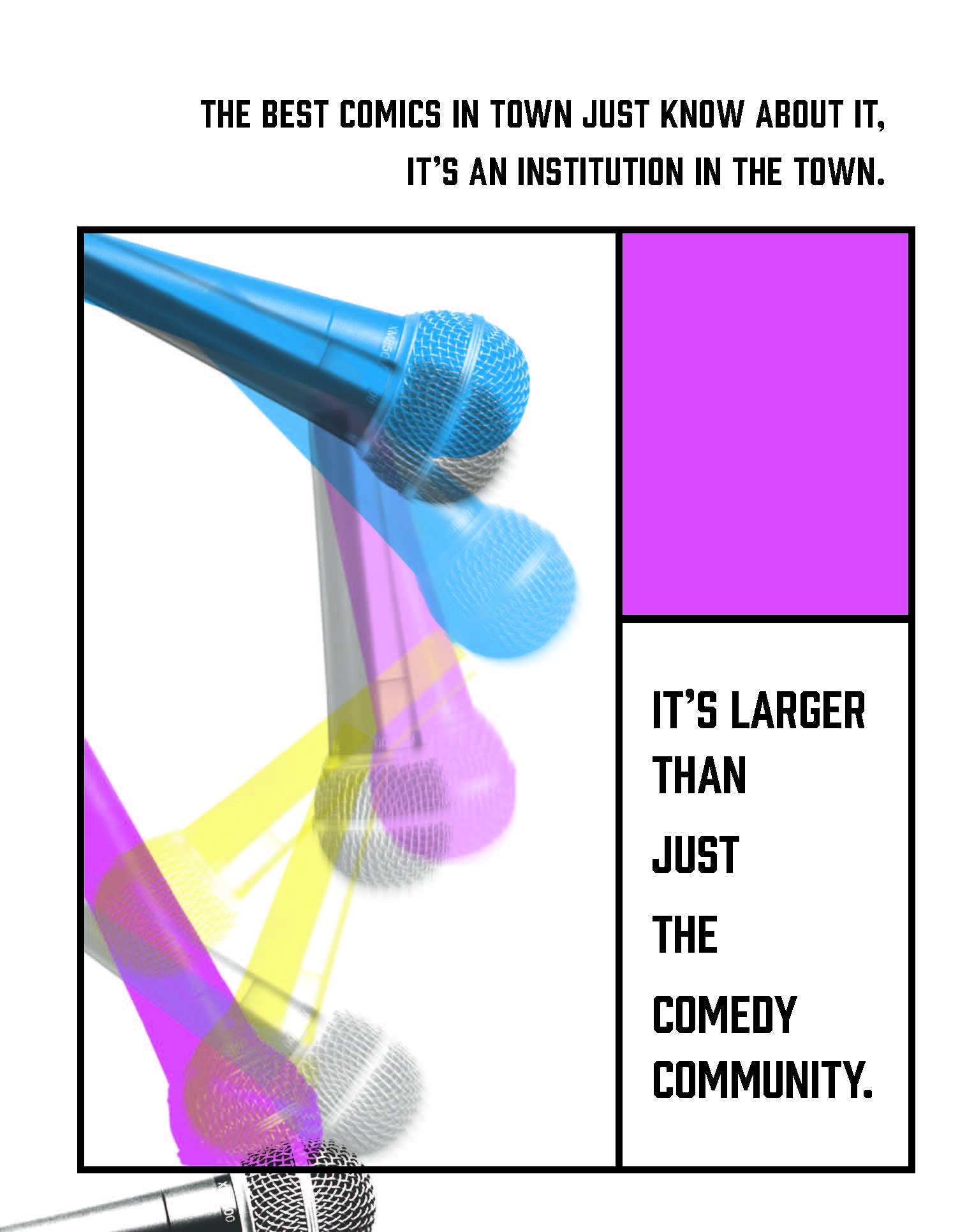 Comedy in New Orleans will have you dropping the mic (illustration by: Julia Berghammer)

It’s 10:46 PM at Carrollton Station; Cassidy Henehan brings the next comic to the stage. He starts his timer before walking outside to take a couple drags from a cigarette. He watches the crowd from behind the glass door for a moment before he stamps out his Marlboro. Cassidy heads back in to the bar to check the timer, the comic on stage has another minute. There’s a loud table in the back Cassidy stares at them disapprovingly, the table averts his gaze, he walks over and quiet’s the table. Cassidy checks the timer again and takes out his flashlight, shining it in the comic’s eye, signaling they have one minute left. More than a minute later, Cassidy is annoyed, he turns the flashlight on and off, waving it in the comic’s face; he looks more and more like an escaping inmate. He’s gone past the time limit.

For more than a decade on Wednesday nights at Carrollton Station, brothers Mickey and Cassidy Henehan have been running the “Think You’re Funny Open Mic.” It’s Wednesday around 10:00 PM, Cassidy dims the lights in the bar while Mickeys at the soundboard in the back raising the level on his brothers mic. “Welcome everyone to the Think You’re Funny Open Mic, please welcome to the stage… Cassidy Henehan!” Cassidy walks on stage; he’s in his thirties, and it appears he hasn’t shaved, and his white tee is covered in stains to the point it can only be described as Pollock-esque.

”How about some applause for no reason whatsoever?” Cassidy asks as Mickey adjusts the levels on the sound board. The resulting applause is tepid, despite the semi-large crowd.

“The way this works is we open the mic to anyone who can spell their name correctly and who hasn’t been banned from the bar. Tonight, you’ll see some of the best talent in the region and some of the weirdest, scariest, most desperate people you’ve ever seen…This is a free show, we only ask for your attention and respect.” He warms up the crowd for a few minutes, talking about how only New Orleans has lazy coke heads and when he attended college he did a lot of drugs and experimented with studying. As the last laugh fades out, he concedes, “That’s about as warmed up as you’re gonna get; how about some applause for your first comic?”

Andrew Healon is a local comic; he runs a show at the Voodoo Lounge and another at the Dragons Den. He’s at the “Think You’re Funny Open Mic” every Wednesday unless he has a show. “The first time I came was about eleven years ago, right after it started. There really wasn’t an open mic in New Orleans before Carrollton Station…No other mic in New Orleans has such packed crowds who pay attention. You really get an honest response. It’s not just other comics there. It’s real people. I think Carrollton Station is the best open mic in America.”

Andrew shares that even sometime a celebrity will come in. Some of the top stand up comedians working today have done sets at the mic. Bill Burr, Zach Galifianakis, Eric Andre, and Hannibal Buress have all stopped by Carrollton Station at some point to try out new material.

The open mic is how every comic starts.

Comedians often do an open mic every day, sometimes more than one a day. I spoke to a successful comic, Geoffrey Asmus, who has done a set at a mic every night for the last 1,800 days–usually more than one a night.

Some of those mics were paying shows, but most weren’t. “Sometimes it’s just me and the guy who runs the mic,” Asmus says. Most successful comics have the same work ethic. They feel if they miss a day they’ll get rusty, or nerves will come back.  One comic started his set saying, “I haven’t done a mic the last couple days, so this might not go well.” Not only do most comics perform on a daily basis, but they do it for years before getting paid. A successful comic Marc Maron described in an interview the grind of open mics saying, “They say it takes ten years to make a successful comic, that’s also the same amount of time it takes to make a bitter failure.”

At Carrollton Station, they have a protocol. An hour before the show starts, the comics come in and write their names on a list. The night I was there, thirty names filled the list. Fifteen minutes before the show starts Mickey and Cassidy call all the comics to the patio in the back of the bar. Cassidy explains the rules. “You’ve got four minutes, you get the light at three. If you go long, you’re not coming back. If you’re not standing next to the stage before you’re supposed to come up, you’re not getting on. Here’s tonight’s order, if I pronounce your name wrong, correct me.”

During the show, the comics either watch from the wing or wait in the back. Almost every comic knows each other, and almost everyone is smoking.

Mary-Devon Dupuy and her boyfriend are both comics; they met at the Carrollton mic. The first time she came to the mic was four years ago and she spent a month watching other comics before she put her name on the list. Mary-Devon does a different open mic almost every night, but Carrollton Station is her favorite. She likes that the comics will stick around after, and thinks Carrollton has the best audiences. “It just runs smoothly, Mickey and Cassidy really care and are serious about comedy and the mic. The best comics in town just know about it; it’s an institution in the town. It’s larger than just the comedy community.”

Comics revolve around the list, checking where they are in the lineup, seeing how many names have been crossed out. I listen as one of the comics bombs on stage. His material focuses on feminists being annoying. Someone’s heckling him. Cassidy walks over to the heckler and whispers. “I’ve told you this before, you come here all the time and talk to the comics, you gotta shut up or leave.” He shuts up. Cassidy picks up some glasses from the tables and brings them to the bar. He comes back and wipes a spill by the stage. The comic walks off stage early, before he gets the light. Cassidy runs up with a rag in hand. “Your next comic…who is your next comic?”

Yourgo Arfsotas, who does eight open mic’s a week, likes the Buddha Belly mic on Sundays but his favorite is Carrollton Station. He says “Carrollton is the heart of the mics; it’s the base of the whole comedy scene; it’s where I tried it for the first time; and where most people in New Orleans did. It’s where you go to emerge yourself in the scene.” He says about Mickey and Cassidy, “they really run a tight ship. They give a shit about New Orleans Comedy. I’ve done mics in Sacramento, Salt Lake City, I’ve done a lot of open mics. This is the best of the bunch.”

Krewe: We’re all around you, the real vampires of New Orleans
Heritage and Folklore