Mitchell Gaudet is a glass artist, and also an activist. Having served in the U.S. Army Reserve, he upholds Americans’ Second Amendment right to sensible gun ownership, but he believes the NRA’s support for military-style semi and fully automatic weapons and large capacity magazines is dead wrong. The current push to arm school teachers is “insane,” he says. Even when he was a captain in the military, Gaudet was never trained for urban warfare.

In the past four years, Gaudet has created art exhibits to illustrate the perils of uncontrolled gun violence and count the number of local victims.

“I really wanted to show that more weapons is not the answer,” Gaudet says.

On the surface, the displays can seem whimsical until you realize their significance. Along one side of the gallery, posters illustrate recommended positions for students and teachers under fire. (First option is to run. Second option is to adopt the fetal position while covering your head.) “Each target is a simplistic, dehumanizing depiction of school children and teachers in defensive and defenseless postures,” Gaudet explains. 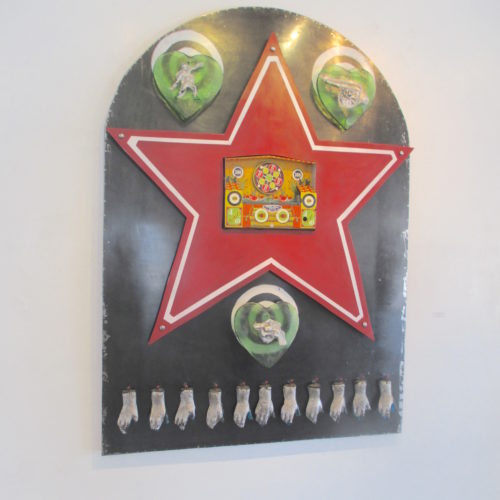 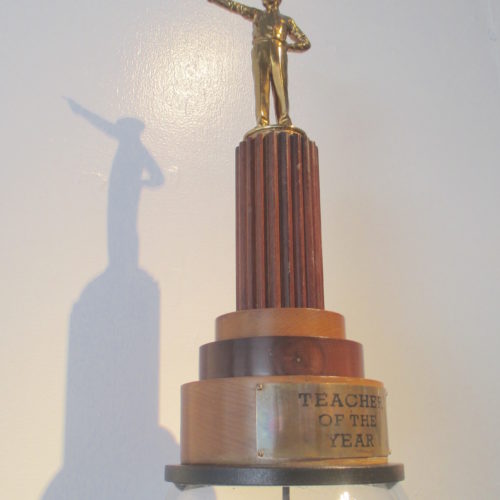 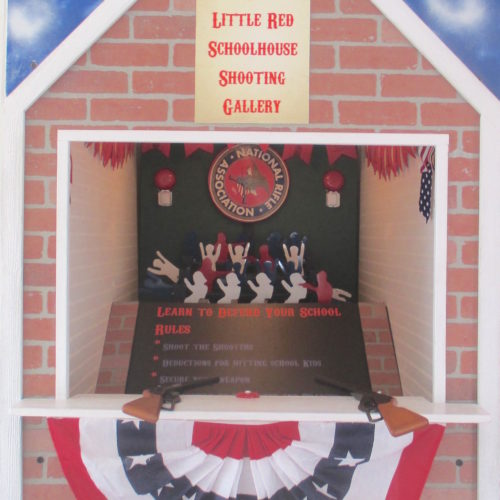 “The show is built upon the madness on both sides,” Gaudet says.

Before developing his art project, Gaudet researched the legal process for purchasing a gun and reviewed school safety manuals. “When our schools hold active shooter drills as often as fire drills; install metal detectors, bulletproof classroom doors and smoke screen grenades; instruct teachers and students how to hide, run from, or defeat an intruder with red lines painted on the floors to designate safe spaces, there is a problem,” says Gaudet, a graduate of Holy Cross High School just a mile away from the exhibit. “I was the problem in my school,” he laughs, never imagining a shooting would happen in any school he attended.

“Shooting Gallery” does not offer any practical solutions, but it is a catalyst for thoughtful discussion, apart from sensational news coverage.

Engaged parenting, gun safety courses, improved secure access in and out of schools, less media and social media focus on the shooters, anti-bullying and mental health awareness are Gaudet’s suggestions.