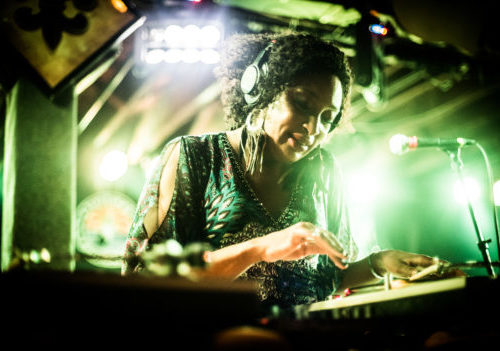 Editor’s Note: NolaVie partners with students of UNO professor László Zsolt Fülöp, pairing them with artists, non-profits, environmental groups, and cultural entities to facilitate a live curriculum that results in a short documentary. This documentary short was made by Jazmine Foucha, a student in the Film and Theatre Department at the University of New Orleans, and focuses on the life and work of DJ Soul Sista.

|Read the full transcript of the interview below|

Hi, my name is DJ Soul Sister. Soul Sister comes directly from the theme song from my show on WWOZ, which is called “Bold Soul Sister,” by Ike and Tina Turner. It was released in 1970. I’ve been collecting records since I was little. I always say that I started around age six with the collecting of records.

DJing was just one of the ways in which I could spread my love of music. I believe in the art of live DJing, which is a little different than the radio show that I do, which is another form of DJing. But, it all boils down to wanting to share the music that I really enjoy.

A great achievement for me is knowing that people are hearing the music I love and wanting to learn more about it, enjoy it. If it makes them remember a memory that they had or if they are hearing it for the first time, my entire mission is educating about the music that I love.

Being a woman in this industry, in what I do specifically, has created some funny stories over the years. I’ve been doing it for 20 years, so people generally know me. I’m not new anymore. But, every now and then, as a woman, you get the same strange situations that keep coming up. The same things that might have happened 20 years ago might still happen. They don’t happen as much, but they still happen. As a woman, you might be discounted or assumed that you don’t know what you’re doing–all sorts of these things. That has been a challenge, but nothing that cannot be overcome.

When I was growing up, I didn’t think about it. You take it for granted that there’s music everywhere. There’s arts and culture everywhere. Then, you grow up, and you realize that New Orleans is a special place. Looking back, in hind-site, I was definitely inspired by all the music. I remember when I was little one year, my parents taking me out of pre-school early to take me to Jazz Fest. There are all sorts of those kind of experiences sprinkled in, things that might not happen in another city. Absolutely growing up in New Orleans will affect you in a way that when you think back you say, ‘Oh, that’s why.’

DJ Soul Sister will be spinning at The Civic Theater for “Purple Takeover: A Prince Celebration at the Civic Theater” on Friday, June 8. You can find tickets for that event here. She will also be DJing for “Soul Takeover at One Eyed Jacks” on Friday, June 15, and you can get tickets for that event here. For information about DJ Soul Sister and upcoming events, check out her webpage.

UNO documentary: Frances Rodriguez
Artists
We use cookies to ensure that we give you the best experience on our website. If you continue to use this site we will assume that you are happy with it.Ok