Xavier site-specific performance: A second line for the school to prison pipeline

Editor’s Note: On April 9, 2018, Xavier University undergraduates staged site-specific performances as protests of the criminal justice system in New Orleans, targeting issues such as the school to prison pipeline, the lack of educational access inside prisons, and wrongful convictions. Students performed at the Israel Augustine Criminal Justice Center and the Orleans Parish Sheriff’s Office. Their work emerged from a course titled “Site-Specific Performance” taught by Dr. Ross Louis and organized as a series of experiments that produced public knowledge about physical sites in the New Orleans area through contributions to digital humanities platforms like ViaNolaVie and New Orleans Historical and site-specific performances staged for a public audience. Students examine the interdisciplinary tradition of site-specific performance from the perspectives of visual art and performance studies. The course is supported by Xavier’s Performance Studies Lab. 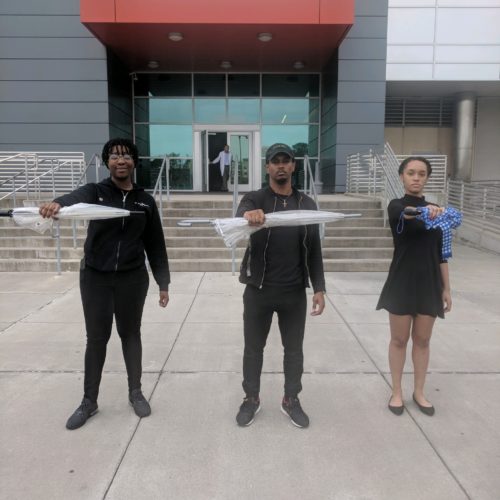 On April 9, 2018, Xavier University students Kianna Greene, Nicholas Reese, and Sarena Weatherspoon staged a mock second-line funeral at the entrance of the Orleans Parish Sheriff’s Office to urge the end to the school to prison pipeline. Displaying statistics that demonstrate school suspensions and juvenile arrests in the New Orleans metro area, the performers moved through a five-minute ceremony, signifying the 5:1 margin that the United States exceeds any other nation in youth arrests. The protest performance concluded with a challenge to the general public: “The body will now be turned over to Legislators, the Board of Elementary and Secondary Education, the Department of Education, and concerned parents nationwide.” Dearly beloved, we are gathered here today to lay to rest the school-to-prison pipeline.

For the last five years, New Orleans has had at least fifteen schools with suspension rates exceeding the statewide average.

Mardi Gras Moments: Learn the rules
Reflections
We use cookies to ensure that we give you the best experience on our website. If you continue to use this site we will assume that you are happy with it.Ok