Editor’s Note: On April 9, 2018, Xavier University undergraduates staged site-specific performances as protests of the criminal justice system in New Orleans, targeting issues such as the school to prison pipeline, the lack of educational access inside prisons, and wrongful convictions. Students performed at the Israel Augustine Criminal Justice Center and the Orleans Parish Sheriff’s Office. Their work emerged from a course titled “Site-Specific Performance” taught by Dr. Ross Louis and organized as a series of experiments that produced public knowledge about physical sites in the New Orleans area through contributions to digital humanities platforms like ViaNolaVie and New Orleans Historical and site-specific performances staged for a public audience. Students examine the interdisciplinary tradition of site-specific performance from the perspectives of visual art and performance studies. The course is supported by Xavier’s Performance Studies Lab. A Pledge for Progress 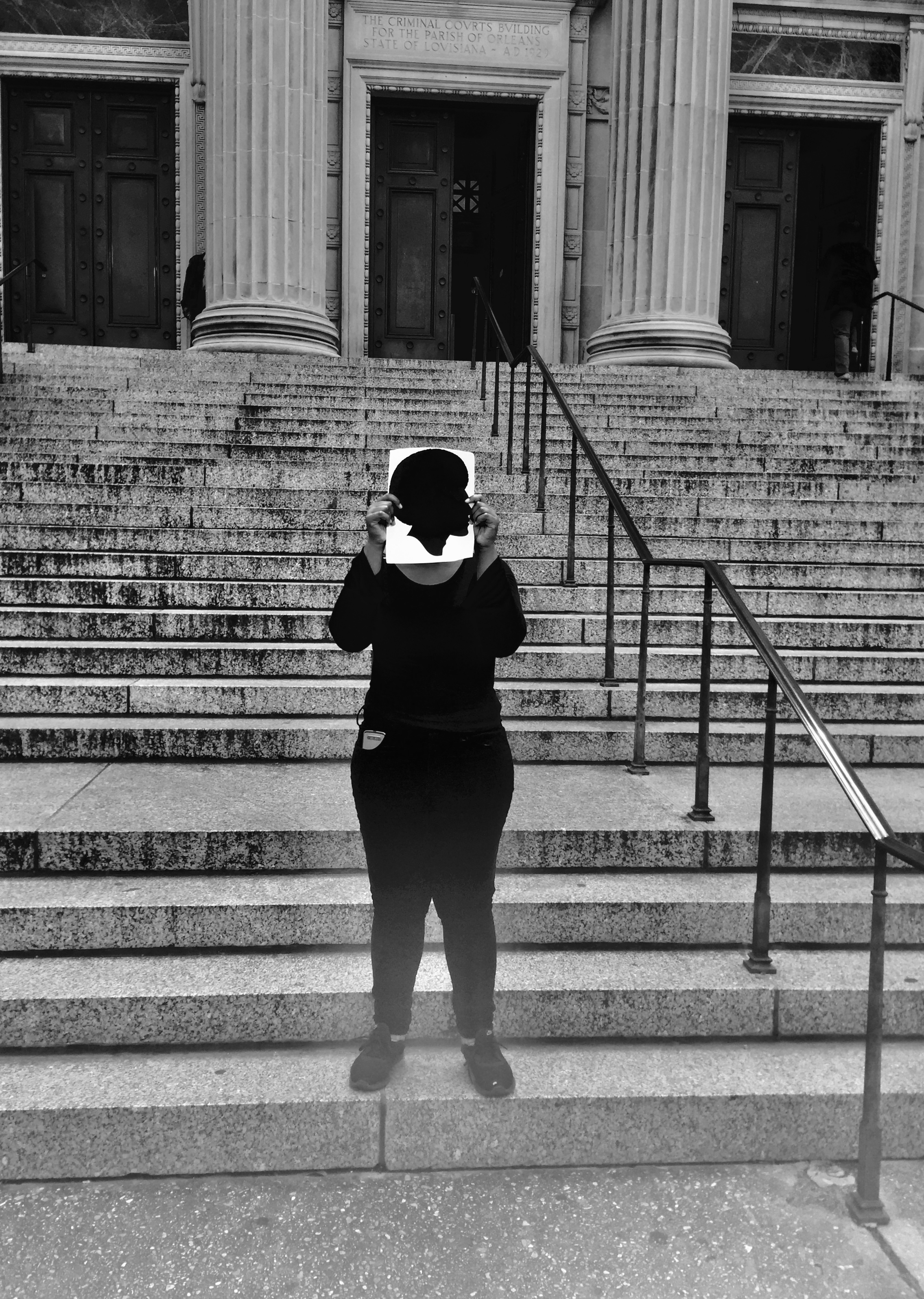 First step to confinement or freedom?

Make sure you have your “get out of jail free” card because we are going to be talking about false imprisonment.

On April 9, 2018, three performers (Angelle Simon, Maci Bowling, and Raven Smith) conducted a performance on the front steps of the Orleans Parish Criminal District Court. An additional member (Taylor Perry-Crawford) impersonated a casual bystander while documenting the performance. Together, the performers told the stories of three men who were falsely sentenced for crimes they did not commit. Three women, three silhouettes, three stories.

The performance began with the three performers walking in a confined circle along the sidewalk in front of the courthouse carrying paper silhouettes over their faces. The first performer would tell the story of Jerome Morgan, a man released on January 17th, 2014 after being incarcerated for 20 years for the murder of Clarence Landry.  Afterwards, she would trace her handprint onto the silhouette using a red marker, and stand in a pledge of allegiance stance with the silhouette hovering over her face.

The second and third performer would follow a similar pattern; the second performer would tell the story of David McCallum, a man sentenced to 25 years to life in prison for the murder of Nathan Blenner. It would 28 years after Blenner’s death, before McCallum would be released on October 15th, 2014.  Likewise, the last performer would tell the story of Robert Dewey, a man given a life sentence with no possibility of parole for the murder and rape of Jacie Taylor. Dewey would have served 16 years in prison before being released on April 30th, 2012.

The performance ends with a human link, red handprints, and the statement of the number of years each prisoner spent in confinement read aloud.

Engraved at the top of the courthouse entrance reads the following quote: “Impartial administration of justice is the foundation of liberty.” In the context of the site-specific performance, the quote seems to comment directly on the actions of false imprisonment. As a message of unity and progression, the performers publicized the blood that might be found on the hands of the justice system. The performance allowed spectators to reassess how they view the nature of the crime and the creation of a criminal. Xavier site-specific performance: A second line for the school to prison pipeline
Race and Ethnicity