Get in where you fit in: The self-made entrepreneurs at Jazz Fest 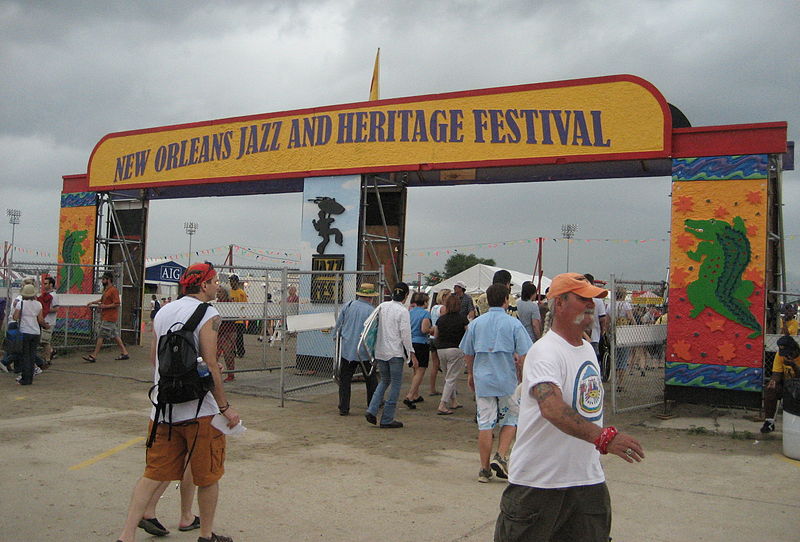 They’re here. You know what I’m talking about. The busses that congest Esplanade and spill out thousands of people dressed in floral shirts and woven hats with camping chairs strapped to their backs. They breath fear into Mid-City residents who don’t have driveways and are banned to their house because they know that if they leave, they may never park again. Well, at least not until Jazz Fest lets out for the night.

Yet, as the music carries over into the streets and the jasmine excretes its intoxicating splendor, it’s nearly impossible to resist loving the fest that brings together travelers, locals, chefs, artists, and musicians. For many, they believe all those artistic amenities lie behind the Jazz Fest gates, but the world in front of the fest is just as vibrant and booming.

Take the man selling water on the corner of Grand Route St. John. He’s been out there selling water every year for seventeen years, and during that time he has seen thousands of people, made hundreds of connections, and earned money that fell in-between those two extremes. His price tag on water was reasonable, coming in at exactly $1, but profit was not his main agenda. He loves the vibrancy the fest brings, and when we asked him about his most spectacular year at the fest, he says without a second of hesitation, “First year after Katrina.” He went on to recount how everyone came together, they got those gates open, and people celebrated in the streets like they never had before. “It was beautiful,” he said, just as an eager customer looking for hydration arrived with cash in hand.

Water selling was just the tip of the self-entrepreneurship iceberg, but in the case of Jazz Fest, replace iceberg with heatwave. As we know, all four seasons can take place during the two-week fest, whether that be torrential downpours (remember 2016 when all those barefoot youths were doing front flips into giant rain puddles, not realizing the amount of horse manure they were body flipping into?), sudden cold blasts (sorry, mango freezes), or the more typical overwhelming heat. The vendors outside the gates burden it all, and every year they try to enhance their sales tactics in a new way.

One group had tried selling kisses one year. Finding that there weren’t many takers, they added a dog the next year. And this was an adorable dog who passerbys could get licked by and leave not only with saliva satisfaction but also a photograph to commemorate “that one time in New Orleans when I paid to have a dog lick my face.” People sell hand-made necklaces and bracelets, scarves made from t-shirts, baked goods, and, of course, alcohol. 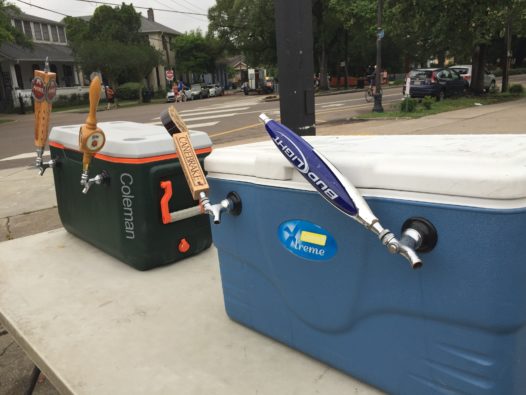 Cooler turned into Kegs. We think even Martha Stewart would be impressed with this ingenuity (photos by: Kelley Crawford)

Mimosas were what caught our eye, especially because the proceeds for selling the drinks went to funding a charter school excursion. The two women and three young girls under the small tent promising, “the best mimosas around,” were raising money to send 28 students to France that following year on a school trip. Drinking alcohol and helping educational endeavors–who can resist saying cheers to that? Excuse us, we mean who can resist saying santé to that?

Bubbles and orange juice were not the only wonders at this tent that was nestled in the front yard of a house on the fest route. There was also on-the-spot-poetry, which we discovered after we ordered our mimosas and talked about the chance of rain that was coming. The woman who made our drinks said that the only thing to cure that cold, bone-chilling wetness was a glass of champagne. “It turns the rain into a sunshine in your brain,” she said.

That kind of happy juice was all over the outside of Jazz Fest, especially in the alcove where bikes can be parked for free. Off to the right of the Fairgrounds was a small, tucked away section where a woman carrying a woven basket full of pralines ushers in people and their bikes. Besides the pralines, she also has amazing spatial awareness. When we caught up with her, there were 200+ bikes all perfectly aligned, locked, and accounted for. The people who dropped off their bikes knew the woman by name, and 2018 will be her sixth year out at Jazz Fest. Having established relationships over the years, she sends out reminder cards six months before the fest begins, reminding everyone where they can find her and park their bikes for free. “It’s a family affair,” she said. “What do people do after Jazz Fest? Everybody can’t go to Disney World, but they remember this. That’s just how it is at Jazz Fest on the final day.”

She calls what she does “lagniappe,” but we know that her service, her smile, and her dedication to those coming to enjoy the fest is much more. It’s the energy that lives all around the gates and streets surrounding Jazz Fest, and it’s something you can’t put a price tag on.