His day job: Artist and urban designer, whose works have appeared at the Contemporary Art Center, at Jazz Fest (look for him again this year at the Fair Grounds), in the Bywater Biennial (a Prostpect.4 Satellite project) and (through March 4) at the Front Gallery on St. Claude

Why Nurhan chose it: He lives nearby, but geography is not enough for restaurant selection. “The more interesting reason is that my wife is vegan and I’m a carnivore. This is a vegan restaurant that offers amazing meat dishes, so it’s one place we can always agree on. We eat here at least two or three times a month.”

What he looks for in a restaurant: Obviously the food has to be stellar. But ultimately, he says, if he had to narrow his food philosophy to one word, it would be sincerity. “The sincerity of those making the food, those attending, the ownership. Is it true to its roots? I’m very conscientious of the owners and makers of the place and their thoughtfulness, as part of the philosophy and experience.”

About geography: His artistic nature steers him to locations that are creative and often under radar. Not only for dining, but also when drawing. His own artistic rendering of the Sneaky Pickle, for example, “shows its connection to its deep historic roots.” If he had one word to describe his art? “Charged.” That sense of motion and excitement infuses both palate and palette.

Go-to dining spots: The roast beef po-boys at Arabi Food Store in Chalmette are amazing. So are the 70-cent donuts at Gerald’s Donuts. Other favorites are Pizza Delicious and Paladar 511.

The basics: Sneaky Pickle sticks to a few strong staples: Choices on the chalkboard menu range from a daily flatbread to “a bowl of food,” a meat, and comfort sides.

Thirst quenchers: An array of local beers for tipplers and sparkling Big Easy Kambucha in various flavors for abstainers. 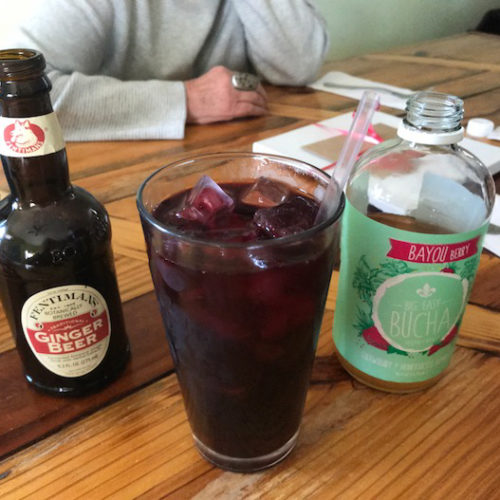 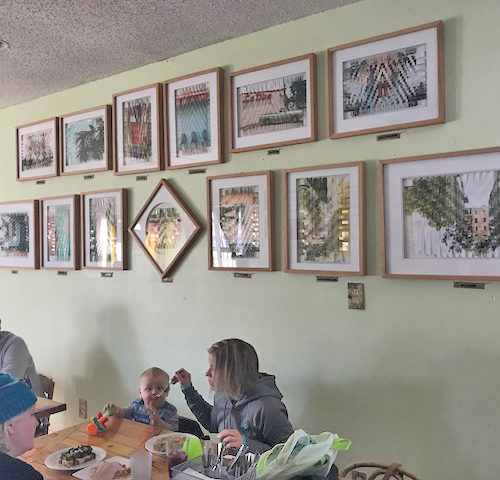 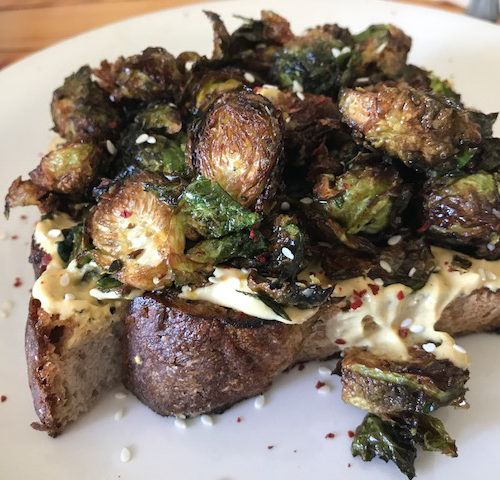 Main events: Who knew you could pack such pungency into a Bowl of Food (offered daily)? Carrots, lentils, butternut squash, onions and potatoes laced with curry blend into an exotic and beautifully seasoned whole, proving that vegan need never be bland. Lunch meats, like this day’s fresh grilled cobia over rice, often are a bit lighter than dinner selections. The flatbread had no weighty reservations, however, with pork belly and caramelized onions atop slaw and a vegan aioli.

Sideshow: Side dishes threaten to overshadow the mainstage: The sautéed turnip greens topped with roasted garlic pumpkin seeds pack a flavorful pungency, an unexpected presentation of Brussel sprouts on a thick slab of Texas toast layered with a cashew “cheese” pleases eye and palate, and words fail when trying to describe the vegan mac ‘n’ cheese.

The sautéed turnip greens topped with roasted garlic pumpkin seeds pack a flavorful pungency, an unexpected presentation of Brussel sprouts on a thick slab of Texas toast layered with a cashew “cheese” pleases eye and palate, and words fail when trying to describe the vegan mac ‘n’ cheese.

Finale: The brownie with ice cream also rises above the dessert norm, this version with a melty chocolate center and topped with homemade coconut milk ice cream.

The ambiance: Casusal and comfortable, with an adjacent patch of sunshine for pretty days. There’s a small bar, a chalkboard menu and order is at the counter.

The bottom line: Unique, thoughtful, flavorful cuisine that won’t break the bank, offered in a creative and authentic setting.

Nurhan GokTurk’s art is currently exhibited at The Front Gallery, and this is the final weekend for the show since it will be closing on Sunday, March 4. 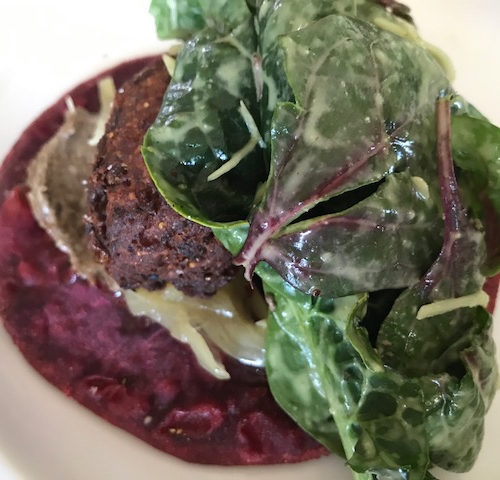 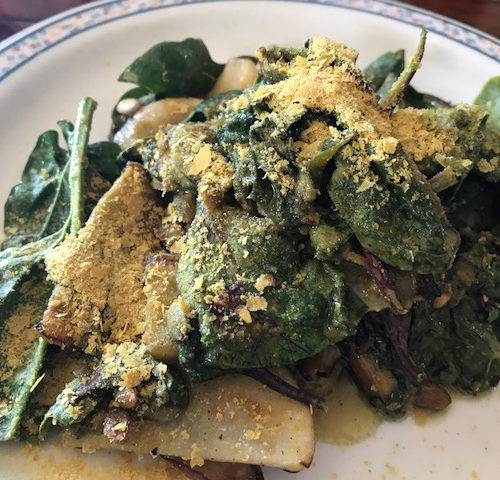 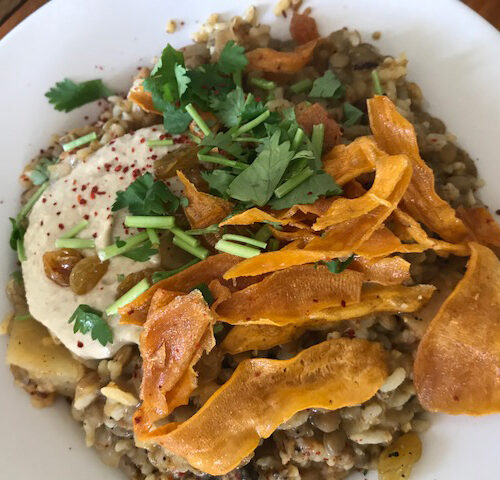 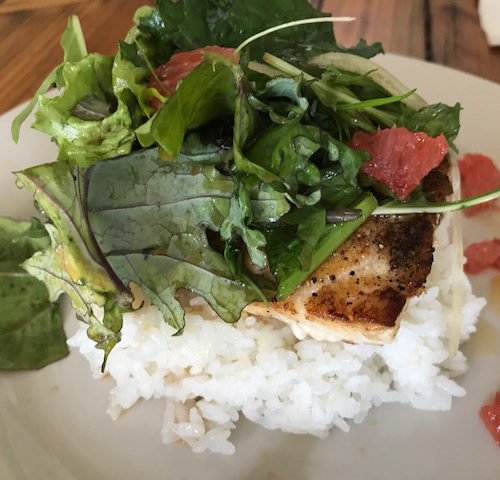 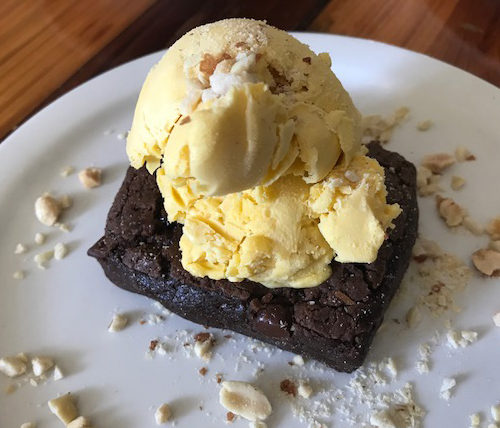 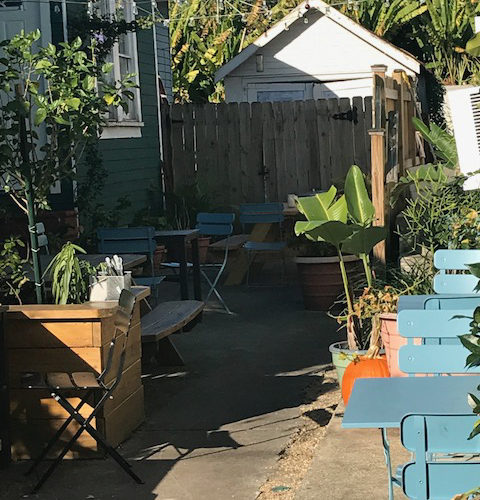 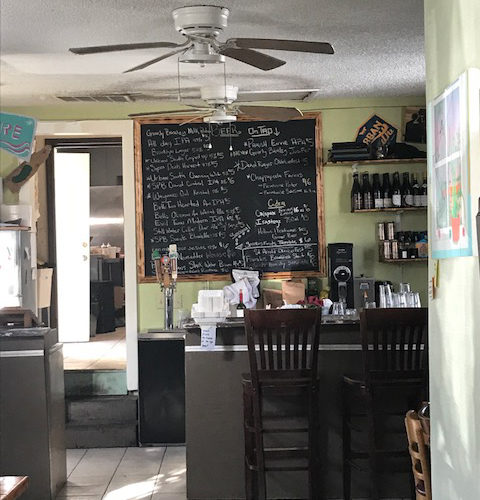 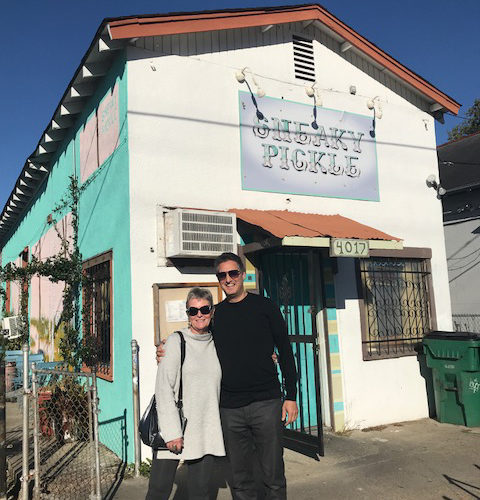