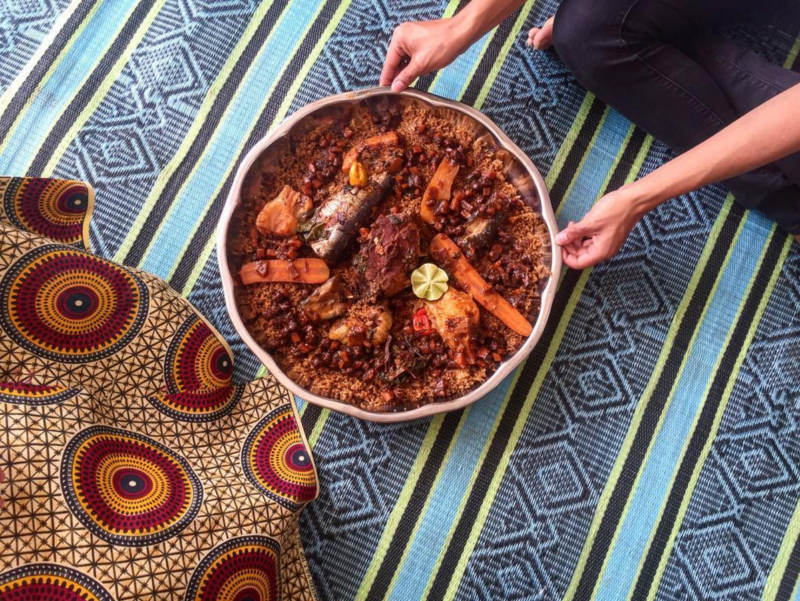 This is a picture of the Senegalese national dish, ceebujën, normally served during lunchtime. The rice used is called jollof rice, which is used throughout West Africa and incorporated into many seafood dishes that look very similar to New Orleans’ jambalaya. Another word for jollof rice is bennachin. 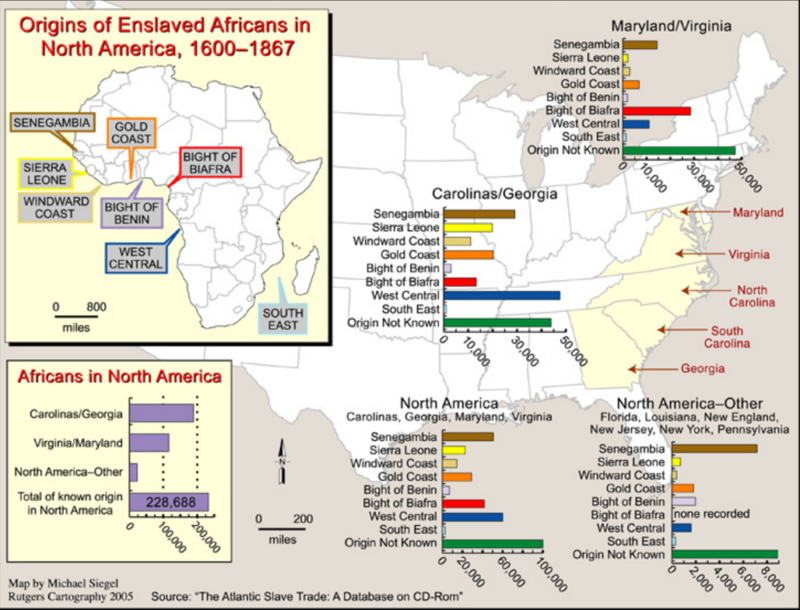 Take a moment to examine both the location of Senegambia, on the Western most point of the African continent, and the high numbers of Senegambian individuals present in different parts of North America. 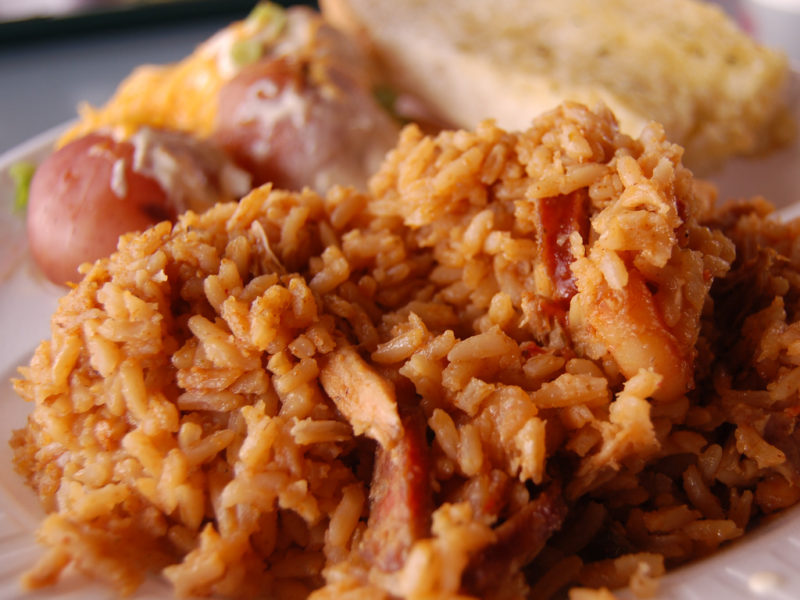 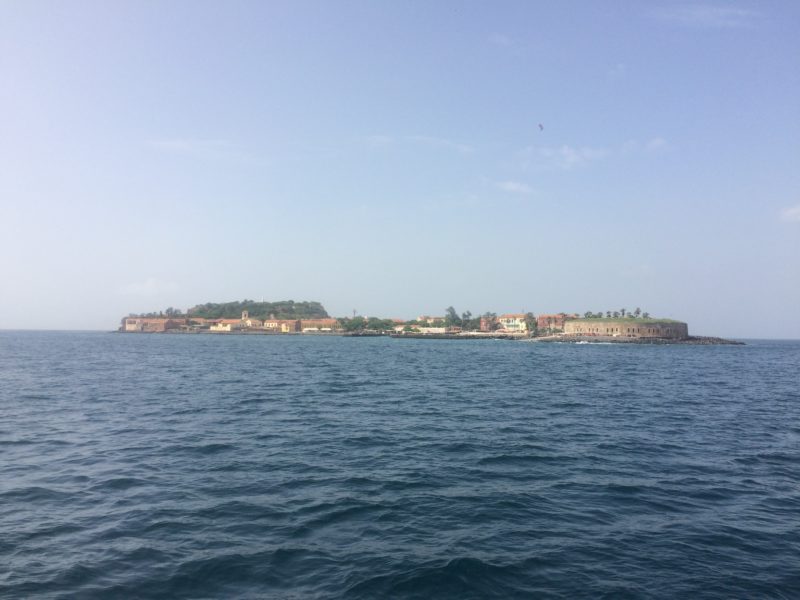 This is a photo of Island of Gorée, an island off the coast of Dakar, Senegal. It was used by the French as an administrative center for all colonial affairs, including the slave trade. On this island, various slave houses were built where captives were kept before departing for the Americas.

Have you ever wondered about how signature New Orleans dishes like red beans & rice and jambalaya have come to be such a staple part of New Orleans food culture? Food is an integral part of New Orleans’ identity, and rice has a special role in this identity. What do you serve gumbo over? What type of dishes do hush puppies usually accompany? From the New Orleans’ tradition of eating red beans and rice on Mondays to the red rice used to make one of New Orleans’ most famous meals, jambalaya, rice seems to be everywhere in this city. But that wasn’t always the case.

Where did the rice come from?

The origin of rice in this city does not date back to the founding of New Orleans in 1718. Instead, rice was brought to New Orleans via the French slave ships that brought West African slaves and the knowledge these slaves possessed about rice cultivation from the Senegambia region to Louisiana. The knowledge and skills these slaves used to produce rice in New Orleans not only contributed to the creation of some of New Orleans’ most famous signature dishes, but also to the survival of the French colony of Louisiana that existed prior to the purchase of Louisiana by America in 1803.

With very similar geographical features to New Orleans, the south of Senegambia was more humid than the north and was home to mangrove swamps which allowed the people living in this area to use specific rice farming techniques on flood plains to perfect rice cultivation. Not surprisingly, humidity and swamps are also crucial to the identity of New Orleans. And those similar climatic and geographic features of both areas allowed the Senegambians, who had the knowledge of rice cultivation in southern Senegambia, to implement the same skills in their new environment of New Orleans, for the climate and geography were somewhat familiar.

In Northern Senegambia, which was the area north of the Gambia River up to the Senegal River, the landscape was flat and dry, which made crop production dependent on the Senegal River valley and flood recession farming. The two crops that were produced most heavily in this region were millet and sorghum, which were partnered with fishing off the coast and cattle raising that contributed to the success of the north. Although both regions were important to Senegambian history, Southern Senegambia is what gave New Orleans rice, and all of the famous dishes we love to indulge in today.

The first two French ships that brought African captives from West Africa to Louisiana in 1719 were given instructions from the French Superior Council to bring back rice, as well as slaves equipped with the knowledge of how to grow this rice, to Louisiana and to take those individuals immediately to the directors of the French trading company in Louisiana. The following year, rice was being produced throughout the Mississippi River Valley and was soon integrated into the French Louisiana economy and exported from Louisiana to the French West Indies.

Rice also proved to be more fit for the Louisiana and New Orleans climate than other crops. In times of heavy rain and flooding, which New Orleanians know is common to the New Orleans weather cycle, other crops, like corn, would be destroyed while rice continued to thrive in these conditions. That would be impossible without the knowledge possessed by these Senegambian slaves about how to grow rice in such a similar climate of southern Senegambia.

The Gambia River, the northern border of southern Senegambia, was eventually used as the main point of access for European traders and colonizers in accessing West African goods and resources, including the supply of slaves. After France officially established the French colony of Louisiana and the city of New Orleans in 1718, the French quickly began using that crucial point of access-the Gambia River-into West Africa to find individuals equipped with the expertise of certain crop productions, including rice production.

In French Louisiana during the early 1720s, crop cultivation was failing as Europeans who came to Louisiana seeking opportunity or exile from France were either fleeing or dying. The new environment and climate of Louisiana exposed French immigrants to new diseases, contributing to the massive decline in European population and the massive increase in the proportion of the slave population from West Africa.

Regardless of French expertise in crop production, French residents had no experience in a climate like New Orleans and Louisiana, which was, and continues to be, characterized by swamplands. Try to imagine a French immigrant in colonial Louisiana trying to cultivate rice without the knowledge brought by Senegambian slaves. He wouldn’t be able to because he wouldn’t know how to grow rice in New Orleans heat and geography!

Such Senegambian expertise was crucial to the success of rice agriculture in South Carolina, too. It turned South Carolina into the richest colony in British colonial North America because West African slaves knew how to cultivate rice so well that it became South Carolina’s staple crop. Rice didn’t make Louisiana a rich colony, but it became important in other ways, like the development of different meals New Orleanians eat weekly.

Jambalaya or Ceebujen? Gumbo or Gombo?

It’s not just the physical rice that New Orleans received from Senegal. The actual rice dishes created in Senegalese society are very similar to modern New Orleans rice dishes. Modern day Senegal’s national dish, ceebujën (also spelt thieboudienne) consists of rice and fish. Chiep, the Wolof (the predominant language spoken in Senegal) word for rice and jën, the Wolof word for fish, are combined in the name of this meal. The fish is usually stuffed with a mixture of spices and herbs including parsley, peppers, and garlic. In addition to rice and fish, the meal always includes vegetables, ranging from carrots and potatoes to eggplant.

This meal is usually served at lunchtime and it is not uncommon to have a varying form of this national dish at lunch every day of the week in Senegal. This meal has also evolved into different forms of Senegalese jambalaya, consisting of rice and seafood and vegetables, very similar to jambalaya found in New Orleans. In New Orleans, rice is used most notably in meals such as red beans and rice, jambalaya, and even added on a side or in addition to seafood gumbo.

The word gumbo, although not entirely rice-related, actually originates from the Wolof word gombo, meaning okra. The Senegambian gombo was already integrated into a Senegalese dish also called gombo, and although it tastes different from the gumbo found in New Orleans due to the presence of different oils and spices, both rely on a key ingredient– the okra vegetable.

As we look to the approaching 300th year anniversary of France’s founding of New Orleans in May 2018, we should also look to the founders of this city that are not always included in history books, like the Senegambian slaves that made growing rice possible in New Orleans and helped spread this knowledge all over the South.

Perhaps the next time we eat jambalaya or gumbo, though, we can think about this great contribution to New Orleans culture and spread the word to whoever is sharing a meal with us.

Want to see it for yourself?

Carney, Judith Ann. Black Rice: The African Origins of Rice Cultivation in the