The New Orleans Oak Alley Plantation offers half day tours on almost every day of the week, excluding Christmas and Thanksgiving. They are well known and book up in advance during popular times and seasons. Oak Alley is one of the most famous plantations along the Mississippi River. This house has been featured in a film titled Interview with a Vampire, because of how accurately it depicts a southern plantation. Covered with the shade of tall trees, Oak Alley dates back to 1839. This plantation was built by one of the South’s richest landowners; John Armstrong, to add to his sugar empire. The plantation gets its name from the line of trees that make way to grande entrance of the main house. These trees are often described as elegant, and they can cool you down on your long walk through the estate. In addition to this, Oak Alley is known to have well trained and knowledgeable tour guides who can give you the honest truth about the land.

The honest truth about this land is that enslaved people were forced to do back breaking labor all day and night. This plantation and the buildings on this land would not have been built without slave labor. No matter the weather, the enslaved people were working on the construction of the house with little to no access to food or water during the day. These people had no stories, and no names. They were simply used for their labor and were deemed useless once they were no longer fit to work. “Slaves overheard conversations about freedom and independence at the dinner table where they served.” 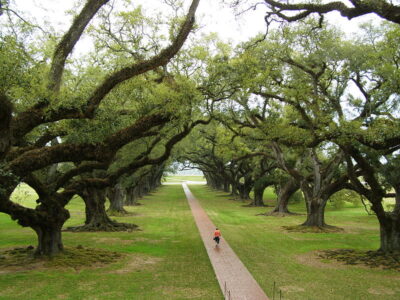 For some people, these plantation tours make them quite uncomfortable, when they begin to consider what really happened on this land. A number of African American tourists have claimed that plantation tours were hard for them to get through, even a bit unbearable. People of color have a much harder time enjoying these tours of such beautiful architecture when they think about some of the things that made these lovely buildings possible. A young African American woman touring a plantation wrote that all she could think about was “her ancestors and the backbreaking labor they had to endure to make all of this possible.” When she stood in the building she knew that none of these luxuries would not have been possible if it wasn’t for the cruel exploitation of her ancestors. At this particular plantation, you can dine and or spend the night. They are known to serve authentic Creole and Cajun Cuisine for breakfast, lunch, and dinner. They have a number of luxurious cottages on the land where you can book a night to stay there. They even have spaces at Oak Valley that you can rent out for events, and people have been married there. Oak Valley has amazing reviews on their website, filled with the testimonies of many happy customers. However, some tourists wonder if they are really hearing about the true history of the land, and this has stirred up a lot of controversy.

In the French Quarter there is a plantation called Hermann-Grima House. Slaves on this land were not permitted to stay with their own families, even after traveling a long way together. An African American woman shared her story about taking a tour of the land. The family that owned the house used it as their city home, as they owned a large sugarcane elsewhere in Louisiana. The enslaved women and men were kept in a building in the backyard. The woman was very aware of being the only person of color on the tour, and she even recalled making the tour guide a bit nervous because of this. Throughout the tour, the tour guide consistently referred to the slaves as “dependencies” or “domestic workers.”At the end of the tour the guide referred to them as “enslaved men and women” she stumbled over her words in a clearly uncomfortable way, as if she wasn’t used to the phrase.

After the tour of Hermann-Grima House the women spoke to the tour guide. She wanted to confirm some numbers, knowing that she planned to write about her visit. After answering the women’s questions, the tour guide blurted out that the current owners of the home don’t really like her to talk about slavery. She added that she is a historian and therefore thinks it should be mentioned. “By portraying a sanitized version of southern history, these public history sites erase the lives of enslaved African-Americans and perpetuate narratives of white supremacy. This version of southern history, sold to tourists and disseminated through books, pamphlets and other media, is a dangerous lie.” .

A young woman named Jessica Smith leads tourists through Oak Alley Plantation. Her goal is to “make sure visitors understand the unvarnished version of the plantation’s history, the darkness and violence that went into building and maintaining one of the prettiest sites in Louisiana.” For a long time, plantation tours were focused simply on the lavish homes and extravagant lifestyles of the white people that once lived there. It was rarely ever talked about how the mass enslavement of more than 300,000 black people was the only way that any of that could be possible. The question then arose whether tourists at plantations want, or deserve more than just a glamorous house tour.

Recently however, these questions have become increasingly harder to ignore and more persistent. This summer when a Minneapolis police officer shot and killed George Floyd, the entire country has called for racial justice and reckoning with the last scars of slavery in this country. People for years have been saying that plantations should not be used as venues or backdrops for weddings, but not people are calling for even more. “Choosing to celebrate your love, your hope for the future, and the beginning of your new life on the grounds of a plantation is bizarre at best, but the word I’d really use for it is horrifying.” While this can be difficult, especially in a place like Oak Alley where the practices there are multiple decades old, many tour guides believe that tourists truly do have an appetite for the truth, and an accurate depiction of what really occurred.

In 2012, Oak Alley built slave quarters on the property, and worked to make them look as historically accurate as possible. The manager of the plantation has built slavery exhibits recently, and they have added the perspective of slave to their big house tours. Additionally, they have strived to maintain a database of all of the people that were enslaved there. All of the employees share the collective goal of keeping the property faithful to its history.