Life as a mobile phlebotomist: a desire to help save lives 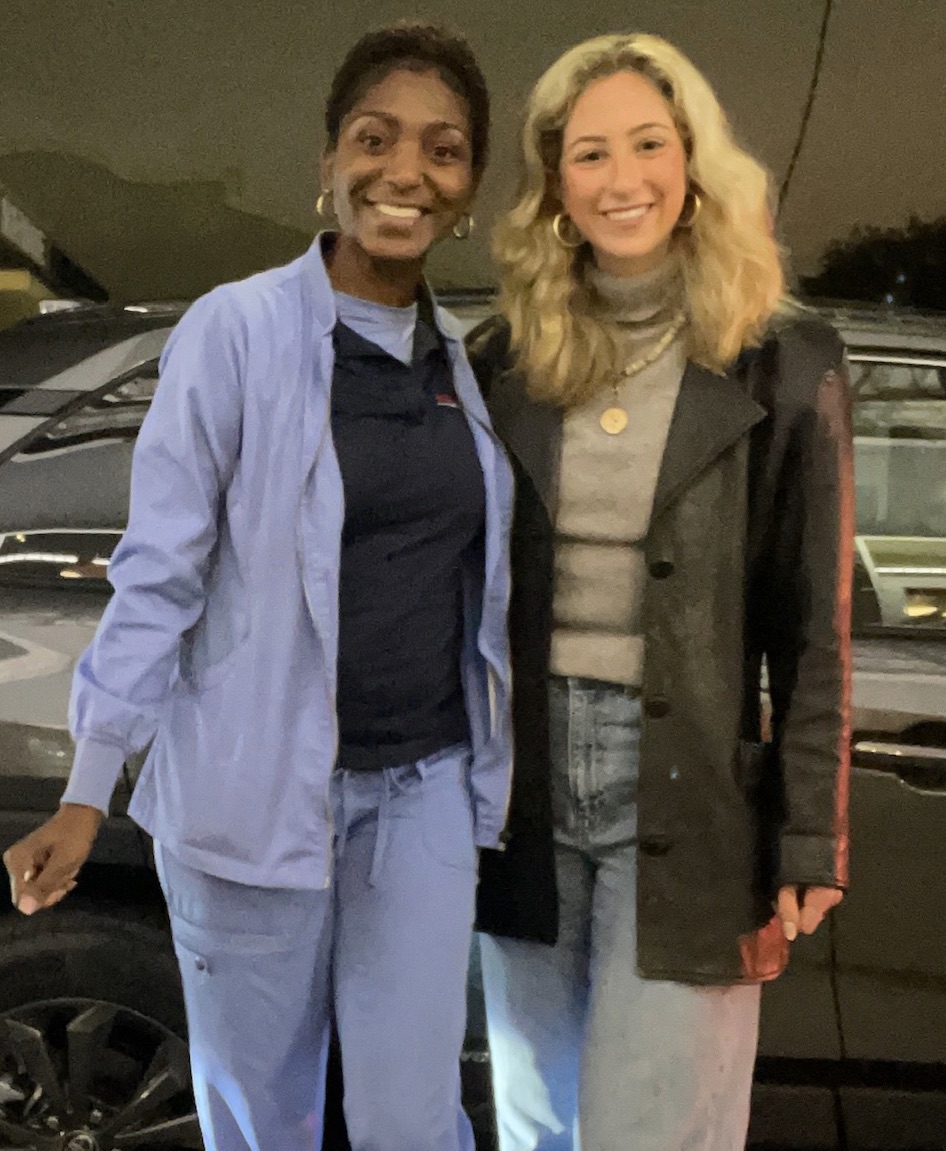 I open the door to a gleaming smile on Camilla Henderson’s face as she says, “Good morning, Eladia,” and enters my dorm room. She straps a rubber band on my upper arm and warns me to look away, as the sensation of a cold cotton ball sweeps my forearm.

“Alright, Eladia, tell me about your plans for today”–distracting me as she gently inserts the needle. I tell her about my plans, and the rubber band loosens its grip in a blink of an eye.

“You did great,” she says, still smiling as she packs up and leaves.

Camilla Henderson’s schedule is usually something like an 8:00 a.m. visit to an Uptown college dormitory, followed by a patient across the bridge in the West Bank at 9:00 a.m., followed by multiple other visits, crisscrossing the city, until the sun goes down.

Henderson is the CEO and Founder of Allimac Mobile Phlebotomy Lab. In August 2018, she started her “one-woman show” with the help of another phlebotomist on standby. She finds her clients primarily through word of mouth and her Facebook page.

Being a phlebotomist isn’t easy. Being a phlebotomist in New Orleans doesn’t make it easier, since she often encounters various social, economic, and medical situations. “What keeps me going is knowing that I am helping someone and making it convenient. I feel like I’m saving lives…reason being is because 70-percent of all patient diagnosis is from lab work,” she says.

Henderson was born and raised in New Orleans, attending L.E Rabouin High School. Every client is different: “I know the different parts of town, so I know if that’s the part of town that may be a little bit, in no disrespect, a low-income living, or if it’s an address of a middle-class or high-class living.”

Every morning, Henderson prepares for a different adventure. She caters to the needs of all people, making convenience a priority for her patients. Henderson sees patients ranging from homebound, special needs, college students, executive workers, and the elderly. Once, she even “went to the courthouse and went right into the chamber courtroom, drew [the judge’s] blood,” and was gone. Henderson started her business because she saw a need for mobile phlebotomy, and making life easier for her patients has kept her going.

New Orleans has one of the highest crime-rates  in America.  Henderson’s job requires her to enter strangers’ personal living spaces multiple times a day. She has to take precautions to ensure her own safety.

Henderson exhales a deep breath. “I’ll be honest with you… I have a license to carry. I always make it a habit whenever there’s a first-time client, and I’m not familiar with them, I always carry. You won’t even know it’s on me.”

Throughout Henderson’s career in mobile phlebotomy, she has required proof of lab orders from her patients as another safety precaution. “You can’t just call me up and say, ‘hey, I need blood work. Could you come over to my house?’ No, I have to have a physical doctor’s order, and I always make my patients fax me something. I look at the lab order, and if it’s an order that doesn’t look right, I’ll call the doctor’s office to verify it.”

At the beginning of Henderson’s career, she learned the quick and challenging way not to become attached to her patients.

Henderson and I have been sharing a pizza, and now, she takes a deep breath, focuses on the leftover crust, and then shifts her gaze back up. “Mr. Phil was my very first patient, and I got so close to him because he was so sick and required labs twice a month. I would always allow myself enough time between patients whenever I drew him, because I knew he has always wanted to talk with me, and I never wanted to rush the conversation.”

Henderson takes a long pause. “His wife called me once and said, ‘Camilla, I need to cancel Phil’s bloodwork because he passed along,’ and my heart just dropped.”

This taught Henderson that her job was a service. “What I had to do—and it was hard, but Mr. Phill was gone, and that connection was gone—and I just had to let it go,” she says. After Phil’s death, Henderson detached herself by acknowledging that when they were together, they had their moment, but once her service was over, “that was it until the next time I would see him.”

According to Franklin, Henderson has been gifted this quality to walk into any space and make someone’s day brighter. “She can change the entire atmosphere of the room. Some people don’t see what they’ve got inside them, and she can help them just in her perky way,” Franklin says.

Driving through the uneven roads of New Orleans and crossing different bridges to get to her patients consumes most of Henderson’s time, but balance keeps her on beat for everyday life. Henderson was raised in the church and believes that the church can change one’s perspective, teaching valuable life lessons.

Franklin elaborates on the impact Christianity had in her family’s life: “The church plays a role in our lives, to have that faith. Life is full of challenges. As a parent, compassion and knowing that you can help people in any Lord-thing you can do is what Christianity has taught us.”

Henderson believes in a balanced life. “I’m Christian, a believer of God, and I attend church. I’m not ‘holy growly’… You have to know how to have fun. I’m gonna be at church praising and clapping my hands, or I’m going to be on the dance floor having a good time.”

She advises: “Trying as best as you can to have a balanced life is the most necessary thing to be happy.”

At 19, Henderson started working full-time in the housekeeping department at the downtown Tulane hospital, but she knew this career was not her calling. She was first introduced to phlebotomy when she cleaned the hospital labs. “A young woman was working in the lab, so I asked ‘what is this called’ because I knew it was not called drawing blood, and next thing you know, I started registering for phlebotomy class.”

Henderson was offered a job immediately, after successfully registering as a phlebotomist. However, the position was  at a mental hospital. Henderson refers to this job as “an experience.” Because she has strived to have a positive outlook on things that aren’t so glamorous, she reflected on this time with sincere gratitude. “It taught me how to deal with all types of patients and people. I drew blood on schizophrenic, bipolar, anorexia, and addiction.”

Henderson recalls many instances where she found herself on her knees, trying to safely and efficiently draw blood from these patients.. Some patients, like those with schizophrenia, gave her a more challenging time because they didn’t understand what she was doing and were fearful.

I ask Henderson’s mother about the first feeling that comes to mind when she tells people her daughter started a mobile phlebotomy business.

She chokes up, and a tear streams down the side of her face. “Gratefulness… She’s got this passion, and it makes me so grateful that she not only thought of it but went ahead and decided, ‘I’m going to do this.’ People always come up with ideas, but Camilla ran with them. She knew this was needed and did what had to be done.”

Henderson has a mantra: “Stay positive and, most importantly, believe in yourself and your visions.”

I have had several phlebotomists, and Henderson is by far my favorite. Having blood drawn has been a fear of mine. However, every time Henderson enters my dormitory, a sense of calmness floods the room, making this traumatic experience relatively peaceful for me.

Black, White & Read All Over marks end of an era
Local Businesses