Life Questions 2022: How to make two lives out of one garment

The textile and apparel industry in Haiti represents 80% of the country’s exports, an essential contributor to the small country’s economy. Employing 52,000 Haitians in 2018, the industry exports roughly $600 million in goods to the U.S. annually, serving to help bring the developing country out of poverty. The economic stimulant sets the tone for a fashion-driven recycling movement taking place around Haiti, as these exported clothes eventually make their way back to the Caribbean country in the form of pepes. 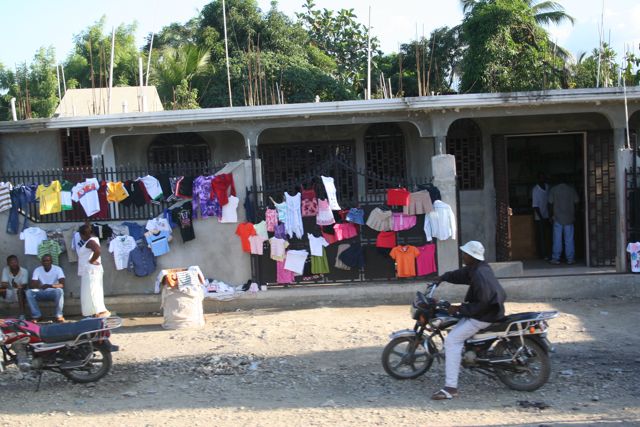 Photo of clothing hanging in Haiti, by Cindy Goldback for Flickr

After cycling through a first round of consumers,  2 million tons of clothing get donated annually in the U.S. Of that amount, between 10 and 20 percent land on domestic thrift store hangers, ready to be resold at a discount. The rest travels internationally to the second-hand industries that have been growing in developing countries. Haitians call this industry the pepe trade. “Thrown away” items that have already served their initial purpose find new lives in this textile trade, where piles of recycled garments get dropped via ship at the Port au Prince. Beginning in 1960 under President Kennedy’s aid program for Haiti, pepes serve an essential purpose in Haiti’s culture and economy.

Fast fashion and accelerated consumerism taking place globally prompts the textile industry with a looming question: what to do about the 92 million tons of clothing waste getting thrown away annually. The pepe trade proposes a potential solution, albeit one donated item at a time. The clothing dropped in Haiti, lacking additional context, appear as undesirable garments that have cycled through their desired purposes. The holistic pepe trade, however, delves into a far more complex industry that transforms these textiles into revitalized materials. Next to the piles of clothing, Haitian tailors sit at their stations, pumping away at their foot powered sewing machines. The pepe trade is about recycling and up-cycling, rather than exclusively sifting through the piles. Seams of American jeans are torn apart, to produce a denim textile. Tailors then clean and revitalize the material, and use it to produce new jeans made to fit a Haitian. That textile receives a completely new life, reducing the amount of clothing waste. The industry creates controversy due to the problems that arise for local retailers in Haiti, as it has undercut domestic businesses and industries from thriving economically. As a result, hardly any traditional retail remains anywhere in Haiti. At the same time, it offers opportunities for the craft within the industry, and skilled workers can contribute to the up-cycle process.

The pepe trade offers Haiti the potential to become the fashion capital of the Caribbean. The growing annual Haiti Fashion Week showcases talented native designers, who emphasize colour and volume with lots of ruffles. The prevalent fashion culture can be attributed to the influence of the pepe trade. High-quality, stylish, and cheap clothing gives locals the option to wear name brands at a discounted rate. The Haitian culture, known for its vibrant art and pervasive voodoo religion, leaves consumers with considerable preferences regarding personal style. Here the secondhand clothing serves as much more than unwanted castoffs, as the consumers’ keen sense for color and style contribute to the success of the upcycle culture.

The pepe trade made its way to the U.S. in Miami Beach’s Little Haiti. The neighborhood contains pepe businesses full of upcycled, revamped garments and textiles. Over the last two decades, Cuban-born artists Alain Guerra and Neraldo de la Paz could be found sifting through these second-hand clothing centers, collecting objects for their next sculptures and tactile installations. The duo makes up the internationally recognized creative team Guerra de la Paz, and together they create art out of casted off clothing. Their installations use recycled materials to offer a thoughtful mix of caution and hope, where their pieces depict scenes that allude to dire consequences if humanity remains on a path of relentless consumption and disposal. The commentary reaches deeper poignancy through their manipulation of recycled materials, which carry reflections of the past and traces of human existence.

The duo says they “find inspiration in the familiarity of ready-made materials.” Garments coming from previous lives “evoke the significance of the human footprint and reveal psychosocial and environmental messages,” which can be implemented in artwork. Once recognizing an abundance of ties as they sifted through the clothing, GdlP thought, What can we do with ties? They then took the “constricting, tight around the neck” aspects of the garment and produced the installation Power Ties, which was displayed in 2012 at the Julian Navarro Projects in Long Island, NY. The exhibit works to communicate the unmentionable by creating uncomfortable scenes that call attention to systemic problems within the corporate industry. The artists kept the garments in an identifiable state, careful not to lose the heavy significance of a tie in the professional realm. In one installation GdlP twisted the ties into nooses and snakes, addressing the darkest depths of status quo and deception. They labeled the display Monday through Friday. 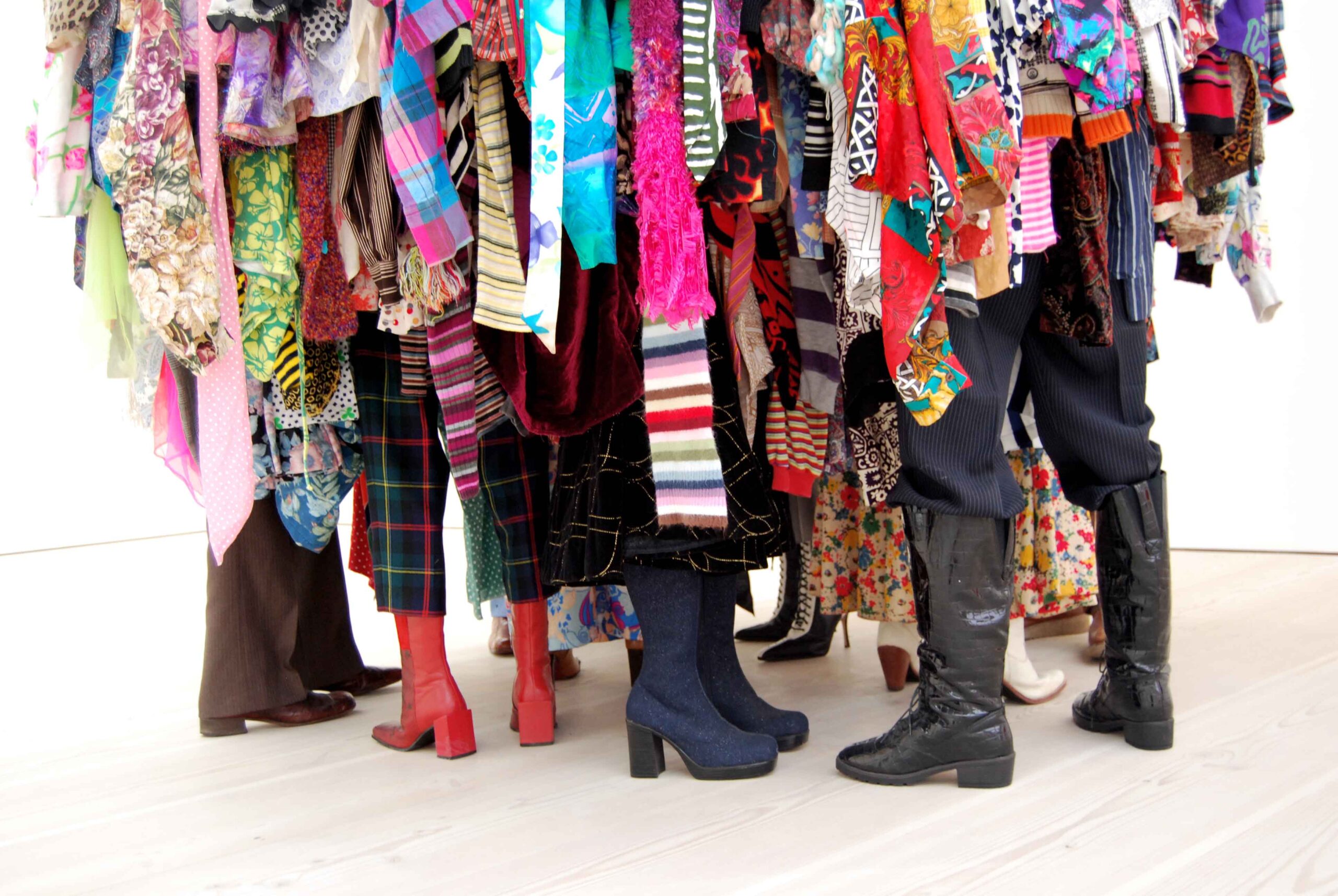 The installation Atom Bomb features a mushroom cloud created from red, orange, and black textiles. GdlP saved these garments from contributing to the masses of global clothing waste, which has become a growing problem created by the fashion industry’s consume-and-discard nature. In Atom Bomb, Gdlp preserves the forgotten personalities of previous owners of the garments by leaving the textiles in rumpled conditions. Clothing tells the history of a person who once owned them, and preserving that significance is a key part of the duo’s artistic installations. The color-coded fabrics continue to hold their original identity while also contributing to a new meaning.

Guerra de la Paz’s installations can be found in the Miami Art Museum, Americas Society in New York, the Chicago Cultural Center, and the Saatchi Gallery in London, among others. They have received global recognition for their innovative social commentary, as well as for their innovative use of found objects. The sculptures demonstrate meticulous attention to purpose, as they work to preserve the loaded meanings of the found materials. The duo represents an emerging group of successful artists who rely on recycled materials to create memorable pieces. German artist GA Schult created an army of Trash People, simulating the waste culture that has created refugees of the consumer society. British artist Nick Gentry finds inspiration for his found-material collages from waste created by technology. The Plastic Museum, located in the center of the Reina Sofia Museum in Spain, demonstrates pure, clean results that can emerge from entirely recycled materials. 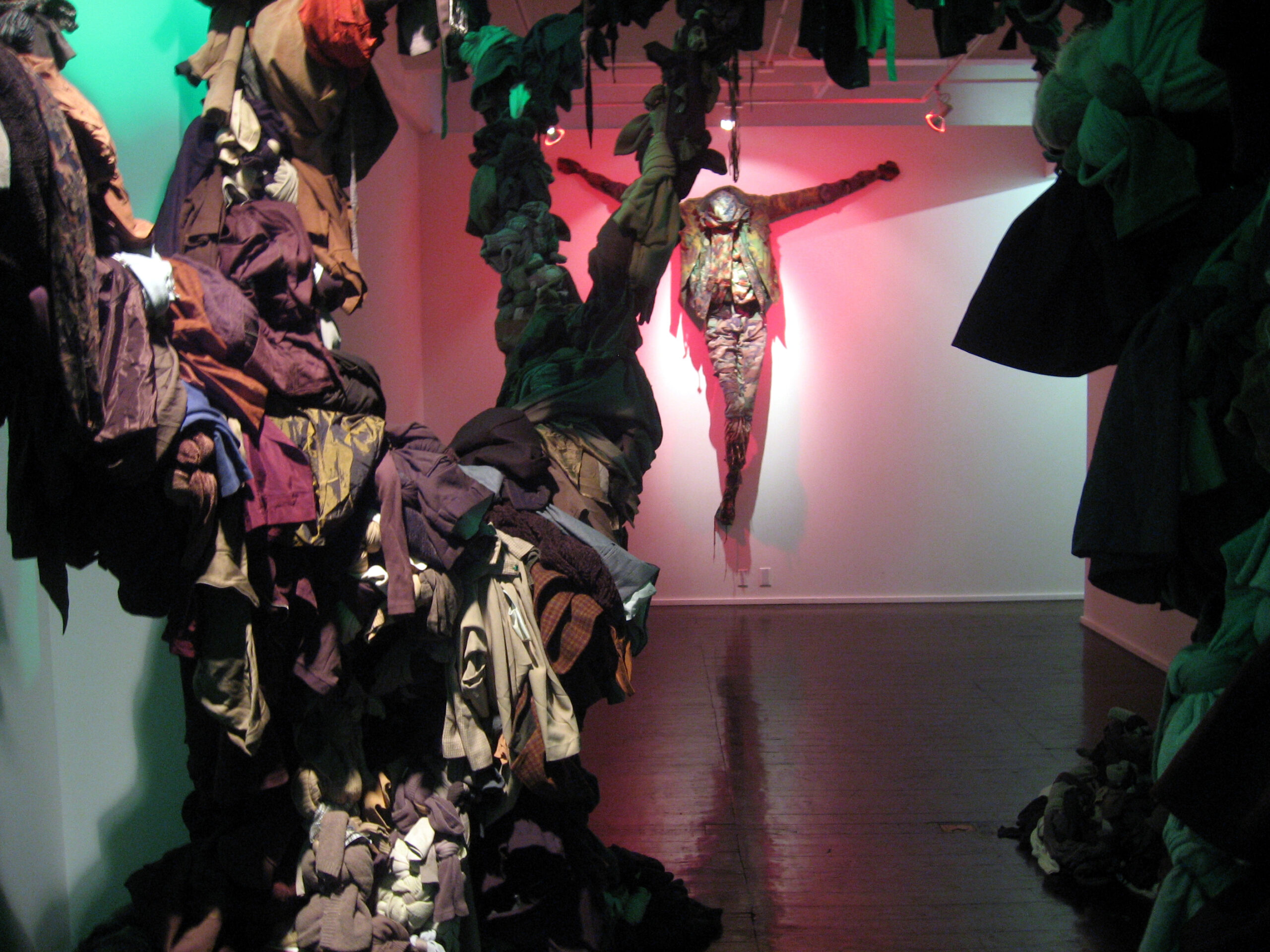 Making room for up-cycling within the fashion and textile industries could help to assuage the looming crisis of consumer waste. With the existing textiles available for reuse, pivoting the industries from production to repurposing materials has become a viable solution. Successful clothing brands Patagonia and Veja exemplify this model, proving to attract a loyal consumer base driven by ethically conscious shopping. Artists like Guerra de la Paz strengthen their artwork by picking materials that bring their own history to the piece. While repurposing old clothing is not a new concept for helping the environment, making a product better because of its roots in recycled materials could help motivate the fashion industry to work in this direction.

Question city: Is NOLA becoming too “lax?”
Art and media